Some might say I’ve taken on too many shows to recap this year. Those people would be right, but they would also be fuckheads about it so let’s ignore them.

If you’ve been following my other recaps (currently, I’m recapping Vikings, American Crime Story, and the novel version of Carrie as well as doing a series of secret TV recaps you can access by supporting me on Patreon), you’ll know that, in the last few weeks, one of my favourite shows has taken a major turn for the worst. Vikings, which used to be my precious baby show that I recommended to everyone while basically bellowing the praises of, has turned into a steaming mire of boredom, sex, and contrived rape plots in the last month or so, and it’s a damn shame to be so let down with a show. And I think in some ways, Riverdale has benefited from the fact that one of the shows I write about week to week is so fucking boring.

Which is not to say that Riverdale gets by unscathed just because it is better than some shows on television. Because, you know, even at it’s best, Riverdale is a complete state of a show. There’s dumb high school drama, there’s ridiculous plot developments left, right, and centre, there’s some truly terrible acting. But this episode, Blackboard Jungle, marks both their return from the midseason break and something of a return to form.

I made no secret of the fact that I thought Riverdale closed out it’s half-season weaker than it started, but this comeback featured a lot of the stuff that made me fall in love with the show in the first place. I just want to get it out here, in case you didn’t already guess, that I still think Riverdale is one the best-looking shows on TV. It’s rare to find a series with a defined vision of what it wants to look like, and such a constant commitment to that vision – this episode was packed with stunning shots, from Betty’s half-brother standing in her doorway to watch her sleep to the gothic kitsch of Cheryl’s family home – really makes the show stand out even in it’s weaker moments.

Okay, I guess we should roll it up back a bit and talk about what’s happening in this episode. As I mentioned above, Betty and Alice Cooper head off to find Alice’s long-lost son after Polly returns home to wave her arms around a little about how she’s never coming back to the family (good riddance to bad acting, but whatever). I see why people don’t like this plot – it does feel telenovela-levels of ridiculously contrived – but it’s also my favourite story of the episode, from Madchen Amick’s breakdown in the car after he initially rejects them, to his unsettled and unsettling presence in the Cooper household by the end of the episode. The hysterically named Hart Denton, who plays the aforementioned brother Chic, has an odd way about him that could be a choice to play the character as doped-out and dissacociated, and could just be bad acting that I haven’t cottoned on to yet, but for now, I’m into it.

The other big plot of this episode revolve around the closure of South Side High and it’s assimilation into…uh, whatever the other high school is called. I still think Jughead is one of those delightfully and utterly unwatchable characters you can’t look at but can’t look away from in terms of both performance and writing, but I thought the plot they dredged up with him was pretty nuanced this week. As the rest of his South Side crew accept limitation put on them by the faculty because they know it guarantees them a better education that they have been denied till now, Jughead, a fanatical recent convert who hasn’t faced the same hardships they have, sticks to his guns. I don’t like a lot of the class warfare stuff the show did last season (except the fact that everyone had to say “jingle-jangle” with a straight face a lot), but there’s something here I hope they run with. 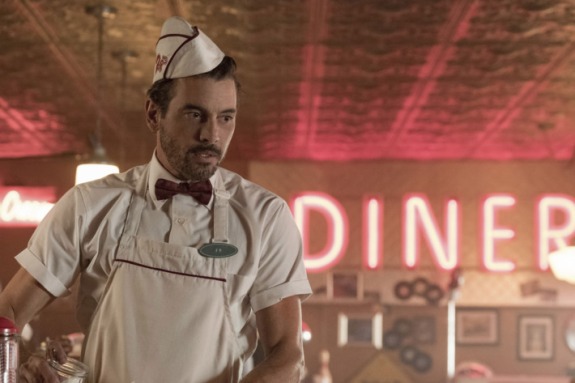 Archie also gets something resembling a plot, in the form of an FBI agents popping out of the bushes (almost literally) and enlisting him to find information that paints the Lodges in a bad light. As I said last season, I thought the show had been doing a better and better job with figuring out where Archie fits in this show (and it’s not as a leading man), and there were a few moments in this plot where KJ Apa actually pulled off some solidly convincing acting. Sure, he’s still starting a band and threatened his father by announcing he’d been writing songs over the winter break, but I’m coming round to Archie as a character and Apa as a performer more and more. Cut him some slack, his hair looks great. Cheryl also hangs out mostly in this plot, and is in full lacquered-red gothic Mean Girl mode and, God, I missed it.

Cheryl’s liquid lipstick game made me proficient in viola

So, yeah, this is a solid episode for me, if not a dazzling one. But then, I think the best episode of Riverdale is still one that’s inherently and totally flawed because the show is rotten to it’s foundations in the best possible way. Entrenched in melodrama, the show would fall apart if it started taking itself seriously enough to be actually good. And that’s no excuse for being boring or contrived, as it was for a lot of the last half-season, but this is also a show in which Alice and Betty must go to room 237 to first encounter their long-lost family member. It’s a show where a would-be rapist gets bones broken on multiple occasions. It’s a show in which someone answers the question “Could you be any more transparent?” with a nonplussed, deadpan “….yes?”. Riverdale might not be the finest show episode to episode, but moment to moment, it’s hard to beat – and I’ll take that over boring any day of the week.