For all that Riverdale gets right – and make no mistake, I think most of the front half of their second season has been strong – it’s still got it’s problems. Just a shame it had to thrust them up front and centre for their midseason finale.

House of the Devil is just a fucking dumb episode, for so many reasons – yeah, Riverdale is a dumb show, but at it’s best there’s a method to it’s madness that keeps it afloat, some kind of order in the chaos that stops it from feeling too much like the shit that stuck to the wall. Last week was a perfect example of the show’s nonsense shaping itself into something entertainingly batshit, but this week is just contrived, and not even in the fun, goofy way Riverdale usually feels that way. 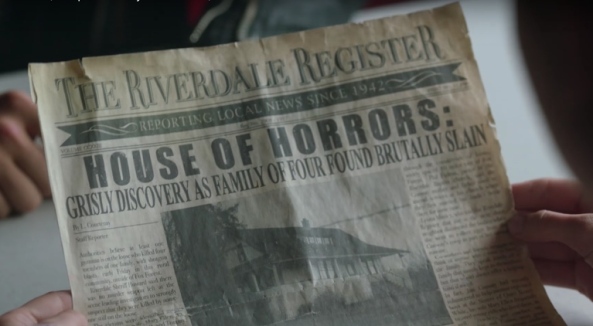 There’s a lot of the standard CW to wade through, first and foremost, and I’m not just talking about the garbage relationship drama that Riverdale has to dump on us to end on a cliffhanger for the back half of the season. Veronica and Archie’s break-up is just brow-furrowingly fucking weird – Archie tells Veronica he loves her, and she’s not ready to say it back. Okay, that’s maybe a decent place to start picking apart their relationship from. Except Archie repeatedly tells Veronica that if she doesn’t feel the same way, that’s totally cool, and their break-up feels less like Veronica trying to distance herself from feelings she can’t reciprocate than it does a chance to get KJ Apa to sadly get his abs out at the end of the episode. The story has been poorly plotted till this point and comes crashing out of the blue here and just feels so deliberately like a way to manufacture some boring, obvious “tension”. Ugh, I’m exhausted with the indolence of that storyline just writing about it. 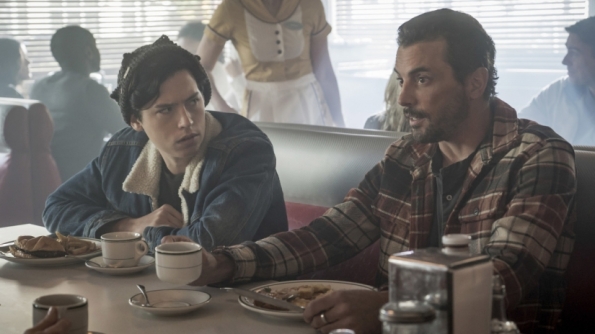 Betty and Jughead’s break-up makes marginally more sense even though they’ve hit these beats a bunch of times already: they’re from different sides of the tracks, they love each other but they’re fundamentally too different, blah, blah, fucking, blah. I was a virulent Bughead shipper in season one but as long as they keep tracing this familiar lines, they’re going to find the audience with less and less patience every time they return to this well. And all of it seemed really there as set-up for the show to imply a hook-up between Betty and Archie which literally not one person on Earth asked for, which…great. This season has taking on serial killers, sexual assault, and class warfare, but yeah, the most dramatic thing they can leave us with is a couple of poorly-flagged high-school break-ups.

Cheryl Blossom’s liquid lipstick game did my homework for me, cured my eczema

Also CW pish? Riverdale twists itself in half to get Lili Reinhart writhing around a pole in her underwear. Oh, sorry, no, it’s the very plot-worthy and important arc involving Betty wanting to join the Serpents and having to compromise some part of herself to be close to Jughead, remember? No? That’s because they jam it in this episode so Reinhart can get her kit off to the back half of Mad fucking World. Riverdale usually has it’s tongue firmly in it’s cheek with tropey shit like this but they play this straight, and there’s no way to write it off other than the blatant and hideous objectification of one of it’s leading women. Fuck that shit. This episode really grated on me from start to finish, and this was the cherry on top of the shit sundae that was for some reason served by Skeet Ulrich in a Pop’s outfit. 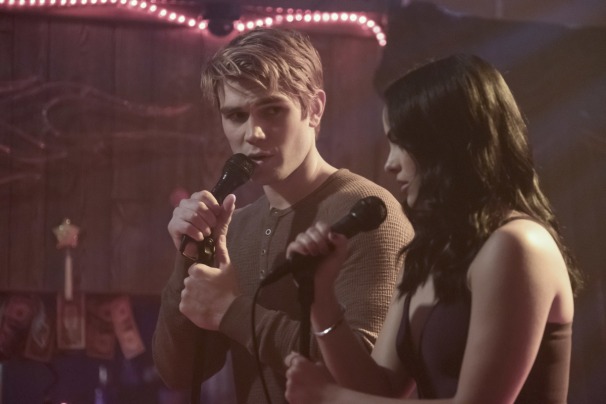 This fucking sad version of Mad World was garbage, and for some reason it transitioned into a sexy version of the same? Ugh, I’m not even touching that.

Oh, yeah, there was that plot to contend with too: my man Skeet is out of prison and sharing the episode’s only really great scenes with Madchen Amick. I still like Father Jughead, but the episode has him awkwardly kicking around the sidelines of the dominant (and deeply uninteresting) teenage plots like the rest of the adult cast, finding no really convincing way to bring the stories together. Cheryl is around, too, still getting all the best lines of the episode (“Get out of here with your male gaze” lost out only to “Get a room, Xenomorphs”) and stalking Josie in a storyline that’s somehow managing to keep things twistedly good fun while giving Josie something to do for a change. Oh, you remember that caretaker who’s been rocking up the last few episodes? Turns out he’s the sole survivor of a killing spree committed by a previous Riverdale serial killer, in a plot that’s picked up and dropped in all of about five minutes.

But despite a few bright moments and a packed-out schedule, House of the Devil is just a mess of an episode – indulging all of Riverdale’s worst impulses, it stands out as the first huge misstep of the season. There’s plenty of time for them to recentre, but they need to remember that they’re at their best when they’re focusing in on Riverdale’s idionsyncratically dark elements, not it’s cheesy teen drama.

That’s all for the Riverdale recaps until they return in the new year – you can catch up on the rest of my Riverdale writing here in the meantime. If you enjoyed this article and want to see more stuff like it, please consider supporting me on Patreon!