American Crime Story Recaps S2E1: The Man Who Would Be Vogue

So, you know that I’m clinically incapable of saying no to a Ryan Murphy show. I watched Glee. I watched The Glee Project. I watched Nip/Tuck. I watched Scream Queens. I watched so much American Horror Story – God, so much American Horror Story. And I have been disappointing and delighted by each and every one, in various percentages. But every time a new one comes along, no matter how bad that last one might have been, I have to dive into it, whether I like it or not: I have a perfect run so far, and I’m not going to ruin that now. Even if it means sitting through another season of AHS, God help my immortal soul.

And, honestly, there are worse Ryan Murphy shows to get stuck with that American Crime Story. The first season, surrounding the trial of OJ Simpson, was one of the best things on TV in 2016. Partly because it was really midwifed by Murphy instead of mastered by him – he brought the show into being and let them borrow the American ___ Story name, directed an episode or two, and left them to it. And what it blossomed into in it’s own right was a masterpiece – scooping numerous awards for acting, editing, producing, writing, and pretty much everything else you can think of. Season two, revolving around the murder of Gianni Versace, was a tantalising prospect, even despite the inherent sleaziness of invoking a real-life tragedy for entertainment purposes. Even if it did star that kid from the Harry Potter musicals and that odd arc in Glee. I was here for it. After sitting through hours of Ryan Murphy nonsense, I deserved something that was actually good for a change, that didn’t involve someone peeing into a condom in the opening salvo.

And the premier, The Man Who Would Be Vogue, is certainly that. This first episode is one of contrasts: between luxury and poverty, the organic and the constructed, the light and the dark, blood on dazzling tennis whites. Helming the episode, Ryan Murphy has never been the most restrained or subtle director (or writer, come to that), but I like the way he draws these contrasts, however obvious, between Gianni Versace and his killer, Andrew Cunanan.

Cunanan, from the off, represents a dozen contrasts in one singular being. He is impossibly slippery, the kind of man who creates narratives around himself based on the people he is surrounded with. He is gay and straight, Catholic and Jewish, American and Italian, a success and an aspiring wide-eyed artist – he is everything you want him to be, and none of it. We don’t have any idea who he is, and he doesn’t seem to be too sure, either. Darren Criss, who I have been stanning for for no good reason for more than five years now, finally gets a role that seems to sidestep his obvious leading-man good looks and delves into something darker at his core – in fact, the contrast between actor and character is almost my favorite meta-narrative this episode has to offer. It’s a mannered, dense performance, the kind that needs teasing out over the whole season’s run, but I like it for the most part. Criss’ commitment makes up for the moments where his talent wavers, and that’s fine while he settles in to such a difficult, challenging role. 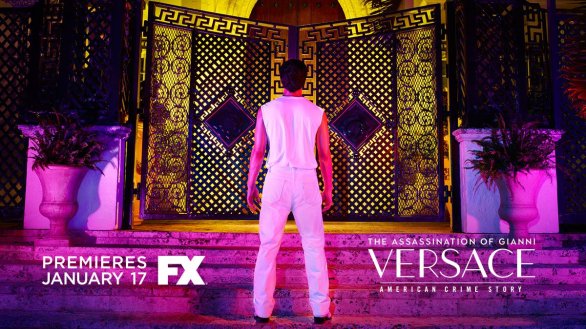 Edgar Ramirez, as Gianni Versace himself, gets the shorter end of the stick as the far less compelling victim character, but one of the episodes most striking bits of contrast comes in his storyline. In one of the episodes more stylistically striking scenes, after Versace is shot and declared dead, instead of the enormous operatic strings that declared his arrival into the show, we get nothing but ambient sound: the only noises those of the doctors and nurses pulling off gloves and aprons as his bloodied corpse lies, no longer a person but a thing, behind them. It’s a striking, standout image, ugly against the lush beauty of the bits of his world we’ve seen so far.

Penelope Cruz as Donatella Versace and Ricky Martin (Ricky Martin) as Antonio D’Amico, Gianni’s long-term partner, both make brief appearances in this episode and both deliver some solidly convincing scenes to boot, but it’s clear that their importance will be delved into in later episodes, which I’m okay with. That all said, it’s awesome to see the exceptionally talented Cruz in an American production that doesn’t just have her as boner-fodder for some slavering dudes, and her powerful one-take speech about her brother’s legacy was one of the most confident and accomplished bits of acting in the episode.

No matter what your opinion on whether or not this story should be told and whether or not it’s in good taste to tell it (and I will be delving in to that later), there’s no arguing with the fact that this episode is a fantastically compelling opening for what’s looking to be one of TV’s most obvious pieces of awards-bait. It’s gorgeously directed, confidently written, and touches on a bunch of themes that the season will delve into (homosexuality in the nineties, the construction of identity, family and legacy). For all his faults, Ryan Murphy knows a juicy story when he sees one, and this tale, couched in the sex, high fashion, and saturated color palette of Venice Beach, is flawlessly, perfectly him. And I just can’t look away.

If you enjoyed this article and want to see more stuff like it, please consider supporting me on Patreon!

2 Comments to “American Crime Story Recaps S2E1: The Man Who Would Be Vogue”