Well, that’s it- the end of what has been the worst year in living memory if you only ask millenials. But amongst the terrifying politics, celebrity deaths, and Game of Thrones somehow having a turnabout of a season and pretty much redeeming itself, pop culture offered a welcome distraction. Some of it good- most of it bad, if we’re honest. So, without further ado, let’s see out this godforsaken year by drinking rum, petting cats, and discussing the best-and worst-pop culture had to offer in the last twelve months.

Best TV Drama: How to Get Away with Murder

Mate, I am STILL not over the incredible twist this show pulled off in it’s midseason finale. Not to mention all the good work it did building up to that moment; double-bluffs and cons that left that final reveal coming as an actual surprise but not as an unguessable shock. The show did a great job exploring the effect the ridiculous events on the first two seasons have had on it’s protagonists, and it’s left the door wide open for a tantalisingly fun second half to the season as it unpacks the motives and murders of the main cast. Not to mention, of course, Viola Davis continues to be just outregeously brilliant in a role that she turns into a nuanced, permanently fascinating study of addiction, ambition, and depression.

I never reviewed this because there is just nothing to say about it. Tom Hiddlestone, practically calling the Emmy committee on a direct line to beg, was impassive to the point of being blank. Hugh Laurie was ambiguously evil till he wasn’t. Elizabeth Debicki was naked, but sadly. Tom Hollander was about the only thing to recommend to this lushly shot but staggeringly dull miniseries, a show that shot for compellingly dense mystery and ended up at dragging, dull, and desolate. 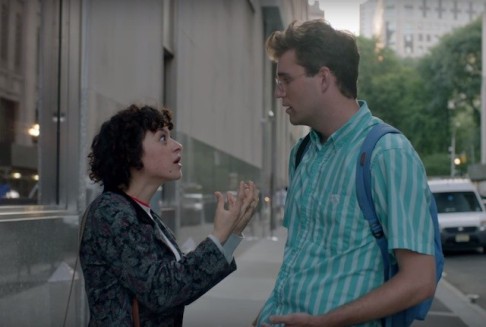 Most of the comedies that I’ve been watching this year have been old favourites; Fawlty Towers, Bob’s Burgers, Arrested Development, an attempt to grope at some comfort as things just got worse and bloody worse as the year went on. But there was one, a late entry to the list that I only watched earlier this month- and that’s Search Party. It’s the blackest of black comedies, following deeply unfulfilled twenty-something Dory-played by one of my biggest crushes Alia Shawkat- as she becomes obsessed with solving the disappearance of her college acquaintance Chantal. It’s really a study of millenial ennui framed in a fun, compelling mystery, wrapped up with a handful of repulsively brilliant supporting characters-Ron Livingstone as creepy private investigator Keith is a particular favourite. It’s grimy and grubby and depressing, but manages to eke an idiosyncratic humour out of the darkness. Plus, that mystery has a brilliant ending you’ll never see coming.

It always will be. Sorry.

Oh, come on, what else was going to be here? Stranger Things,  a Netflix original following the disappearance of a young boy, captured the entire internet after it’s release, and it’s obvious as to why. A beautiful homage to horror movies of the seventies and eighties, it never relied too heavily on it’s Carpenter-esque roots, hacking out a brilliant story of it’s own and creating a handful of iconic characters in the process. Throw in some amazing performances-particularly from the show’s stunning child cast- and you’ve got an instant classic. RIP Barb; forever in our hearts. And glasses.

Honourable mentions to the patchy but ultimately interesting season of American Horror Story, and the awful-but-stupidly-fun first season of Legends of Tomorrow.

Again: come on, what else was going to be here? The zombie show that swept the nation has been on a slow downward decline for the last few seasons, but it reached it’s nadir with a season opener that both managed to shock and dissapoint. Since then, it’s relied heavily on Jeffery Dean Morgan’s teeth-grindingly  mannered performance as Negan, while criminally underusing more interesting characters in other parts of the show. Where once The Walking Dead relied on powerful, character-driven stories wrapped in a zombie-apocalypse pastry, it’s turned into a relentlessly grim, Sisyphean task of a show, and I am finally and firmly out.

Honourable mention to, of course, the endlessly shite Gotham.

I could so easily put Travis Fimmel here again, but there was one performance, however brief, that made my brain turn inside out with sheer brilliance, and that was Mahershala Ali as Stokes in Luke Cage. I wasn’t so taken with the show itself, but this was a performance to be reckoned with; the gentleman gangster thing has been done to death, but Ali brought a whole new spin on it, balancing unsettling threat with unarguable charm and garrulity. A star-making performance, I expect directors to be fighting tooth and claw to get their hands on him after this.

My queen, my love, my ethereal space mermaid. Sarah Paulson rightly scooped the Emmy for her unthinkably brilliant performance in American Crime Story, and how- her turn as Marcia Clark, one of the prosecutors on the OJ Simpson murder trial, was the standout in a cast full of exquisite performances. We ached with rage at the injustice with which she was treated, and even though the outcome of the trial was set in stone, you couldn’t help but hope she would see justice done. Sarah Paulson soared as the feminist icon, all ferocious conviction and blinding smarts, and finally got the recognition she deserved for her talent.

No questions asked. This soaringly brilliant sci-fi insta-classic better sweep the Oscars, or I’m quitting them for good. There’s nothing more to say about it but: see it, and see it now, to restore some small inch of faith in the world of cinema this year. Which brings me to…

In a year where almost every movie I saw at the cinema was shit, this one took the biscuit. And that’s not to take away from the staggeringly staid storytelling or perfunctory performances in Batman vs Superman; nor from the lazy team-up of Civil War. Or the vague, distinct disappointments of Deadpool or Rogue One. But Suicide Squad had it all- terrible characters, a plot that made next to no logical sense, awful music, blatant overtones of sexism and racism, not to mention none of the good manners to be even vaguely fun. A culmination of awful cinema, Suicide Squad took twenty-sixteen to new, unthinkable lows. Even Will Smith and Viola Davis weren’t enough to get this mind-bogglingly misjudged train back on the tracks.

I don’t CARE if this only came out two days ago! Vikings produced one of the most blindingly brilliant episodes of TV I’ve ever seen. I don’t want to give away too much-and there are spoilers in that linked review, of course- but it’s a proper piece of event television, a moving, powerful, and elegant culmination to a story we’ve been following across decades now. If ever you needed a reason to start Vikings, the knowledge that this episode is coming is it.

Yes, cast your mind back to the start of the year- or don’t, because that would mean you have to remember this piece of shite. A new low for Steven Moffat, and trust me when I say that’s really saying something, this feature-length episode managed to both completely miss the point of the women’s suffrage movement AND ALSO everything that it had set up over the last few episodes of its run. Boring, inexplicable, and embarrassing for all involved, I suppose fans can only hope the new season’s run won’t be quite as cringe-inducing.

And that’s it for this year, folks! What have been your favourite- and least favourite- movies and TV shows of this year? And what are you most looking forward to in 2017? I’ll be continuing my Vikings reviews, and perhaps returning to another set of recaps too. I hope you have an amazing Hogmanay and a very happy-and potentially hungover -start to the new year!