Why is The Walking Dead Shit Now?

Yeah, yeah, so I rag on The   Walking Dead a lot. Get over it, fangirl/boy. This is it: my Magnum Opus, the article I’ve had brewing in me (and no doubt written over the course of many drunken rants round at my friend Ellie’s house, sorry Ellie) since halfway through season four of this godforsaken show: why, and how, The Walking Dead became one of the biggest and most disappointing shows on television. 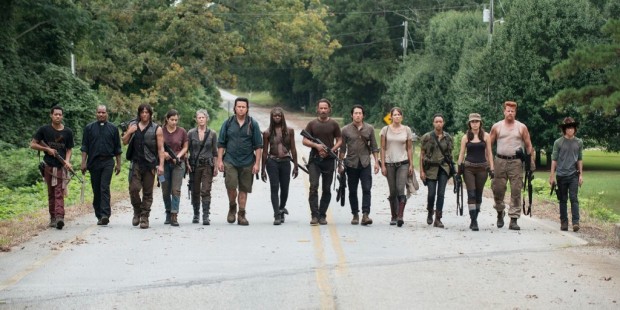 Previously, on AMC’s The Walking Dead (you said it in the announcer voice and don’t pretend you didn’t), the show was actually pretty enjoyable. It had interesting characters, a cool premise, and neat execution that hooked in an enormous audience. And then…not so much.

I think the biggest problem The Walking Dead suffers from is the fact that there is no end in sight. If you look at the great shows of the last few years-most notably stuff like Breaking Bad and Game of Thrones- all of them have an endgame, a story that they plan to tell- most importantly, with some kind of satisfying ending in the hairlines to build towards within a certain amount of time. The Walking Dead? Ever since the Governor bought it, they’ve been marching around a merry cavalcade of things looking alright for the group for a bit, and then not, then looking alright again for a bit, and then not, and…you get it. With nothing specific to build to, the last few years have been nothing but filler as the show drags it’s feet, knowing audiences (like me-stupid, stupid me) will still tune in because dammit, they’ve been around long enough that they have to know how this ends. I promise you, this show will not get better until cancellation looms and they have to actual drive the story towards an actual end point tie instead of relying on whatever new fan favourite from the comics they can ruin on-screen.

The show is also heavily, heavily invested in some characters who really aren’t going anywhere, a problem that has plagued the show for years. If you look back at the arc of the Shane/Rick plot, Shane dies as soon as his story is over-it’s powerful, satisfying, and means we can look back on Shane as the great and fascinating character he was instead of wondering when the hell he’s finally going to buy it and make room for someone else already. Since then, as fan favourites have emerged, the show is leery about killing off anyone it sees as a reason for certain factions of it’s audience to stick around.

The premiere- and season one in general-is still great, in all fairness.

Where potentially interesting characters like Bob and Noah buy it before we’ve really had a chance to explore their nuances, characters like Glenn and Daryl kick around for literal years after they’ve served their purpose to the plot and the rest of the characters (not to mention the characters who are still with us who’ve been criminally underserved by the plot- Michonne and Tara stand out as the most egregious, but there are plenty more) . It’s not to say anything against the actors, who are uniformly pretty good across the entirety of the show, but the show simply simply runs out of things to do with these characters. Oh, Daryl’s being stoic  in the face of danger again, is he? Right, cool. Oh, Rick has his crazy-eyes on and is monologuing about dictatorships? Neat-o burrito. While The Walking Dead will, once in a while, stumble upon something new to do with these characters (as it sort of has with Rick this season), they spend so long going around in circles with them that it’s hard to care when they do.

While the direction and acting is usually relatively solid, the writing in The Walking Dead leaves a metric fuck-ton to be desired. Instead of trusting the audience to fill in the blanks, they rely on tropes and imagery so hackneyed it’s hard not to envy the zombies who are at least too braindead to comprehend how shit this all is. This week’s episode, for example, features a scene between Carl and his lady love Enid wherein he rescues her from some zombies by mowing them down in his car. Later, she comments (and I parahprase here): “you weren’t just out for a drive, were you? You followed me.” This is just the most recent example I can think of; in terms of clunky, smash-you-over-the-head with it obviousness, Sasha laying down in a pile of dead bodies (because SHE also FELT as though she were DEAD do you SEE) springs to mind, and I’m sure you can bring to mind at least a few scenes that made you roll your eyes so hard they didn’t stop for days. Yes, it’s a populist show, but I’m not asking it to reference obscure Kafka texts in the looks Rick and Michonne exchange (Richonne forever, on a side note); I just want to be treated as though I might be able to put the pieces together myself, you know?

The show has it’s moments- of course it does, from the breaching of the wall at Alexandria to Carol taking down Terminus single-handed-and it has been consistently good, with a strong first couple of seasons. Not to mention a few genuinely superb actors (yeah, I’m talking about Lennie James and Melissa Mcbride; care to fight me on it?). But, as a whole, it’s turned into a rambling, ugly, brainless mess and oh God I refuse to end this article on a metaphor about how the show has become a zombie because then I’m just as bad as them, aren’t I?