Last week, I wrote yet another bitter review about the new horror show Outcast, and how it never really sold the “horror” side of itself. And that’s not to mention the scores of other horror shows that have dissapointed me with their non-existent “horror” in the last few years- the latest season of Sleepy Hollow, The Walking Dead, Scream Queens. Bah, humbug. A few notable exceptions aside, horror just wasn’t living up to my lofty standards, which is no-one’s problem but mine, but still. Huff. Meh. Blergh.  And then, swinging out of left field, comes Netflix’ s newest addition to the horror canon, Stranger Things, to stab me through the neck and yell “SHUT UP LOU NO-ONE CARES WHAT YOU THINK!” into my gurgling visage. And I couldn’t be happier! 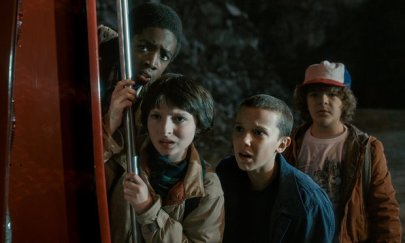 As a hundred reviewers have already noted by now, Stranger Things is a salute to all things seventies/eighties and horror related- posters for Evil Dead and Jaws dangle on the walls on the main characters, while The Thing crops up on TV screens. The soundtrack might as well be someone sitting with their knee in your chest yelling “HAVE YOU HEARD OF THIS BAND CALLED THE GOBLINS?”. The direction evokes John Carpenter, Dario Argento, and Wes Craven by turns- and all that is excellent, turning the show into a must-watch for fans of that era of horror. The Duffer Brothers, who created Stranger Things, also worked on Wayward Pines, which, now that their magnum opus has been released, looks like a practice run for this (much better) show. 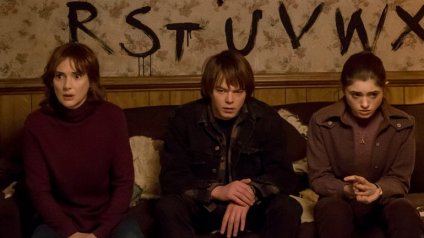 And, of course, the technical aspects are all outstanding- Winona Ryder headlines, and her performance as the brittle but compassionate Joyce is fantastic. Fellow adult David Harbour steals the show right out from under her nose with a devastatingly brilliant and understated performance as the cop who’s got more investment in this case than he perhaps should have. But this is inherently, a show about kids- and the four child actors the show revolves around are phenomenal. Finding one decent child actor is one thing, but four, plus a handful of teenagers I don’t want to throw into an industrial wood burner? Miraculous. The writing has, if you’ll excuse the oxymoron, a fuckton of nuance, and the direction is consistently solid. Even the title sequence is bloody excellent. But that’s been well covered already, and I want to talk about something else.

Winona Ryder, at one point, has a cluster of fairy lights as a screen partner and still KILLS IT

Stranger Things is, for my money, simply the best horror TV show I’ve seen in years. And it didn’t strike me how much the horror shows I do watch hadn’t been living up to the standard of pure horror like this. Most horror shows (like Supernatural and The Walking Dead) now run for years instead of telling one story, and that requires them to pull in new themes, arcs, characters, new “The monster was humanity ALL ALONG” cop-out endings. I don’t blame them for this- those shows have long seasons and giant arcs to contend with, and that’s their bag and they do it with a modicum of success. But God, did I miss having a show that just set out to tell a straight horror story, a little self-contained tale that doesn’t sprawl out over years and years and seasons and seasons.

I don’t want to give too much away about Stranger Things, because the glory of the show is watching this (perfectly paced, might I add) story unfold over the course of eight near-perfect episodes. It does touch on some themes, like loss and parenthood, but it is, at it’s heart, driven by the horror. It’s fucking scary in places, forcing you to squint into shadows and examine the background of every shot to see what’s waiting for you in the shadows. Mixing human horror with the supernatural, and filtering this through the eyes of the four leading children, it’s a fucking chilling piece of TV, one that isn’t trying to do anything more than tell a damn good scary story. They have left it vaguely open for a sequel series, but what I want to see is Stranger Things turning into an anthology banner series- because I want to see what other brilliantly unsettling stuff The Duffer Brothers have under their hats.

And for me, right now, that’s more than enough. I honestly cannot recommend Stranger Things enough, especially if you’re a fan of horror- and if you’re not used to scary TV, I suggest putting away a few extra quid for the energy bill this month because you’ll be sleeping with the (hopefully not flickering) lights on for a week.