A Year Without Alcohol

So, I’ve been sober for a year. 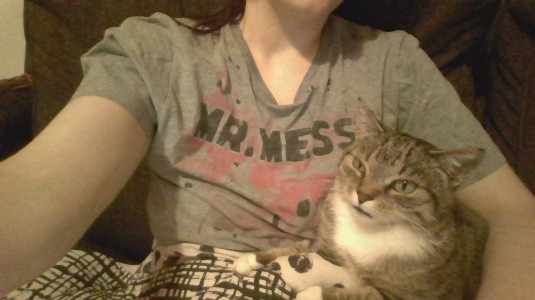 This is my cat, sitting on me as I write this, high off her face on treats and superiority.

Just over a year, actually – at about ten to eleven the New Year’s Eve before last, I drank half a glass of really bad red wine that stained the inside of my lips and gave me a headache. And that was the last time I drank alcohol.

That’s wild for me, to be honest, because when I committed to quitting drinking for a year, I really didn’t expect it to stick. I thought it was nice in theory, but in practice, that I would tumble over the first hurdle and straight into a bucket of Jacob’s Creek. And then it became habit, and then all my friends were booking coffee shop dates instead of bar ones (honestly, big shout out to my fantastic friend group, who have all been utterly supportive and accommodating of my efforts), and then I was just a person who didn’t drink. Like that. Something that had been part of my life, part of my identity, for so long, had been replaced, and it didn’t feel like the loss I thought it would be.

It’s funny – I imagined than when this year was over, I would be spinning around the apartment with a bottle of rum singing “Accidentally in Love”, but I can truthfully say I really don’t have any interest in drinking right now. I’m not saying that I’m never going to drink again, because I have no idea what the future holds in terms of me, my liver, and the three bottles of rose that are still sitting in my cupboard because I can’t foist them off on anybody, but right now I have no inclination, and haven’t for a long time.

I’ve seen a lot of benefits from sobriety, which have made it easier to stick it out when times got hard – my skin is better, my clothes fit nicer, my insomnia has greatly lessened, which is an utter blessing, let me tell you. I have more money, not just from not spending it on alcohol, but not paying for the drunk lazy taxis and takeouts afterwards.

But the biggest thing I would say that I’ve dealt with since I quit drinking is major mental health issues. Now, to be very clear, I don’t think the problems I’ve been having (which I covered here, if that’s something you want to read more about that) have been a direct result of me quitting drinking – bad shit happened this year, with even the great stuff being really emotionally heavy, and all of that would have happened whether I’d been drinking or not.

Rather, as I wrote in my first post about my sobriety, that I used to use drinking to build a wall between me and the way I really felt. Where before I would have just drunk myself into a stupor a few times a week to deal with how I felt, I couldn’t do that anymore, because I had decided I wasn’t drinking for year and I’m a stubborn little cow. So I actually had to…deal with what was going on, and how it was affecting me, in a way that didn’t involve alcohol.

And I have. I in therapy, I’m taking medication, I’m trying to give a shit about myself as opposed to just stamping down on my feelings like so much rubbish in an overflowing bin. I’m not saying I wouldn’t have done all this if I had still been drinking, but with the safety net of alcohol removed, I had no choice but to find healthier ways to handle how I move through the world and how I let it effect me.

While quitting drink has been fucking hard at time, I can honestly say that I regard dropping booze as a net positive for me. In terms of physical health – well, I’m not going to patronise you, you’re probably well aware of the bodily effects of alcohol and how it effects you, and yeah, I have felt physically much better this year than I have since I started drinking. But in terms on my mental health, the safety blanket of alcohol is no longer there for me, and that’s put me in a position to actually be proactive about what was going on in my head.

I think there’s this notion that surrounds alcohol and sobriety – that if you’re not an active, destructive alcoholic, there’s no real reason to stop. I existed outside of that definition – while I would class my relationship with alcohol as unhealthy, it wasn’t catastrophically life-altering or relationship-ruining. And when you exist outside of that “obviously fucking terrible” boundary, there’s some confusion about why you would want to stop – it’s a part of our culture, something most of us, including me, spend a lot of our social time partaking in. But that doesn’t mean you can’t, or shouldn’t stop. Something doesn’t have to be ruining your life for your world to be better without it.

And sure, I’m not saying that everyone should stop drinking immediately, because I know plenty of people who have healthy, enjoyable relationships with alcohol and it’s their choice to manage them as they see fit. But, for me, quitting alcohol has been one of the best things I’ve ever done for my health, both mental and physical. If it’s something you’ve been thinking of doing, I would honestly just recommend giving it a go (though please, please make sure you’re doing it safely if you are a heavy drinker – have a look at the guidelines here for help). Getting sober has been one of the best things I’ve done for myself in my adult life, and I couldn’t be happier I gave it a shot. And I hope that whatever relationship you have with alcohol – sober, in recovery, or anything in between – it serves you well.

If this kind of writing appeals to you, check out my“quit smoking” series. If quitting drinking is something you’re in the process of, have already done, or are thinking about, let me know in the comments below or hit me up on Twitter or Tumblr where I’m always hanging around looking for a way to avoid work. And, as always, if you enjoyed this article and want to see more stuff like it, please consider supporting me on Patreon!

Filed Under: Discussion, personal shit, Uncategorized
Tags: benefits of quitting alcohol : how do i quit alcohol : quit drinking not alcoholic : sober for a year

5 Comments to “A Year Without Alcohol”