Now, lockdown has sent us all down a few rabbitholes, I’m sure. My latest? Theme parks. Mysteries, histories, the whole nine yards – I have become an amateur theme park enthusiast without stepping out of my own home. God, the internet is a wonderful thing, isn’t it?

And, while breathlessly sharing my newfound love with my family this weekend, we got to reminiscing about theme parks that we had attended together when my brother and I were children. A requisite Disneyland visit, as well as trips to the UK’s slightly dismal but vaguely charming offerings like M and D’ and Flamingo Land. But there was one that stood out about all else – a lost relic that seemed almost too surreal to have ever actually existed.

And that place was Santa Claus Land.

The premise of Santa Claus Land was simple: 365 days a year, it’s Christmas morning on a small resort in the mountain village of Aviemore. Originally opened in 1975, and intended to serve as a tie-in to the workshops and storefronts of local craftsmen, it was initially part of a – well, let’s call it optimistic attempt to boost the economy of the small town, which mostly involved plopping concrete blocks into the rustic scenery and calling it progress. The blocks were decaying within a matter of years, and it eventually required a nearly five million pound bailout in the form of a rescue project as it started to, literally, fall apart at the seams, but that’s another (actually very interesting) story of its own.

It’s hard to string together the exact timeline of Santa Claus Land, as a part of this doomed development. since it seems like most would prefer to forget it. But right from the start, it seems to have had this distant air of slapdashery to it. A contemporary Movietone report (in which the narrator cheerfully and continually mispronounces “Aviemore”) on the attraction shows the basics of what you might expect from a Christmas-themed park – there’s a chunk of ice labelled “North Pole”, a little sleigh ride train for the kids, as well as Santa’s grotto and the resident Santa therein (who seems to have been played, for as long as the park was open and as far as I can tell, by George Swinney, who is consistently held up in all the reviews and memories of the park as the utter and obvious highlight).

And then they just tacked on some other stuff, too – an attached and apparently unrelated section was just a straight-up cowboy theme brought to life, probably to try and cash in on the boom in Western movies at the time. It’s lightly surreal to cut from jingling Christmas jollity to the Okay Corral, horseback rides, and signs about Native Americans that have not aged well, but it all seemed, at least, sincere.

Which was a surprise to me, because I remember a very different version of Santa Claus Land than that. A little digging revealed that it came under new management in the 1990s, and, it seems, it was under this terrifying tutelage that it became the nightmare that I remember today.

Like many kids who grew up in the Highlands, a trip to Santa Claus Land was a sort of grim inevitability at a certain point in your life. It’s there, it’s cheap, it’s Christmas-themed, you’re a kid – a rainy weekend let loose in the soft play area is as good as any other. So, one of my brother’s friends snapped his arm in the so-called soft play area. Nowhere’s perfect, you know?

But looking back, and with the helpful reminiscences of my older brother and parents, I have some serious questions about what was going on at Santa Claus Land. Not that I believe that it was some front for anything nefarious, nothing like that – no, the nefarity was worn on its sleeve. Though there are few contemporary images of the horrorshow that it was, I feel like I can communicate at least some of it through photographs taken by intrepid explorers since it was shut down in 2002.

The iconic soft play area, marginally more safe, probably, than it was when I was in attendance –

– not to mention a dinosaur ride, in a slightly decaying shed, whose connection to Santa Claus was never fully established or even really attempted –

(above three images via user Lost on Derelict Places)

– and not forgetting, of course, the terrifying visage of Frosty the Snowman, emerging from the forest like some perma-grinning permafrost nightmare – 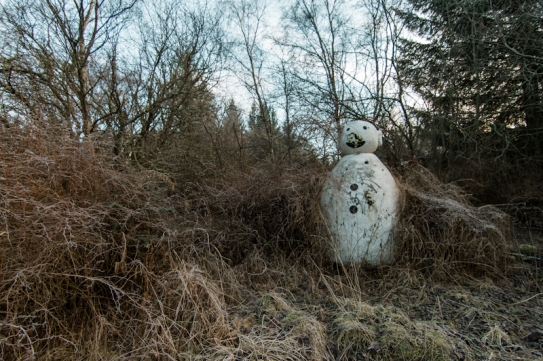 (image via user Albannach on 28DaysLater.com)

I don’t think that pictures after the fact can truly convey how bizarre and nightmarish this place was. For only three pounds fifty a head, you could enjoy what was billed as “Europe’s largest indoor soft play area”, a claim that I could never find verified anywhere other than in boasts from the park itself, whose staticky, feet-shredding “play” furnishings you were required to scramble around barefoot. Another major feature was a very early nineties Virtual Reality device that looks like the Matrix’s Matrix, and an imposing needle of ice representing the North Pole. The Western section seemed mostly scrapped for a dinosaur one instead, with a small dino ride the highest thrill point of the park, which, thematically, makes about the same about of limited sense as the cowboy creations.

Christmas Carols were piped in non-stop, all year round, despite the fact that only about half of the park seemed actually Christmas-themed. The staff were uniformly miserable, as you might be stuck being beaten over the head with festive cheer for a living. There was just something, vaguely, distantly sinister about a place meant to capture, according to early press upon its first opening, the excitement of Christmas morning over and over again – nothing can really sell that level of dizzy excitement, and any attempts to do so seemed inherently insincere and deeply cynical. There’s not much to suggest that my experiences were just unfortunate bad luck – one of the only reviews I could find after its 1990s reboot described it, unsettlingly, as “a mixed bag of pleasure and pain” for the reporter and her family. Though she did think the food at the Gingerbread House cafe was reasonably priced.

Santa Claus Land closed in 2002, and the land has since been attached to a number of different projects – shopping centres, Tesco developments – though the latest I can find on it is from 2017, so I’m not sure what is left of the park in 2020. If you have any memories of Santa Claus Land, or indeed any pictures from either its heyday or the state it fell into after it was closed, I would love to hear about them – feel free to drop a comment on this article, or message me via the contact tab on this blog. I know this is a slightly different post for the Guignol, but thanks for indulging me in this little wander down memory lane, and we’ll be back to our regularly scheduled snark-gramming soon!

If you’d like to support my work, please consider supporting me on Patreon, or buying my books! I also write about movies with my brilliant co-editor over at No But Listen.