Riverdale Recaps: A Kiss Before Dying

I know what you’re thinking: why Riverdale?

Not “why would an esteemed recapper of all things TV and otherwise like yourself recap a lowly CW show like Riverdale, Louise?”. But “why Riverdale?”.

Because I struggle to remember a time when I’ve seen a show as utterly batcrap fucking mental as Riverdale. A sexy neo-noir hyper-meta take on the teen genre framed through the lens of the classic Archie comics, Riverdale is – well, no, that’s all I need to say really, because how in the hell did that ever make it to screen? The first season might well be one of my favorite pieces of TV of the last five years, because it’s so unremittingly, utterly bizarre: Gossip Girl meets Twin Peaks as translated through the half-cocked eyebrow of Cole Sprouse. So when the second season came along, I knew I had to pounce on the chance to recap it. It’s just too fascinating, too awful, too brilliant, too everything. If any show sums up the complete unruliness that has been this year, it’s Riverdale. Fucking Riverdale. The sexy Archie comics show. Fuck. Fuck. 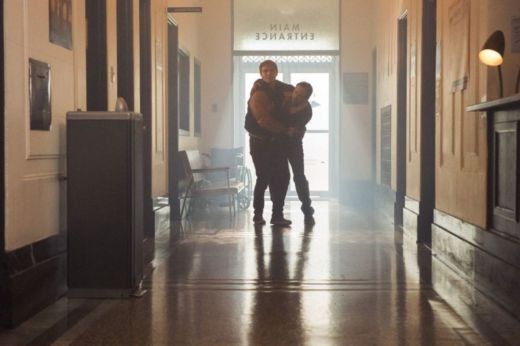 And so, we’re back, with a first episode, A Kiss Before Dying, that is as good a showcase for everything brilliant and blatantly bullshit about this mad little show. We pick up right where the first season left off, as Archie Andrews (KJ Apa) hurries his recently-shot father, Fred (Luke fucking Perry) to the hospital. The denizens of Riverdale hurry to his aid, and the show tries to set itself up for another patchy but endlessly compelling season.

I think, since it’s the first recap, it’s worth talking about the man at the ostensible centre of this episode and the show in general, Archie Andrews, as performed (“performed”) by KJ Apa. Now, you can talk as much as you want about the thankless leading man role and how many actors much better than Apa have been cursed with inability to turn a central role into something more than perfunctory, but Archie is, by far and away, the worst character in this show. It’s so bad that, when he briefly and apparently accidentally displayed an emotion in this episode (asking Veronica, who I’ll get too later, to leave as he dealt with the trauma of the shooting), I actually felt like it was worth commenting on to my viewing partner. Stuck with Veronica (who I’ll get into in a future recap, and how), he’s just a nothing of a leading man – every episode that insists of making the pretense that he’s still actually the leading man is incorrect in it’s assumption.

Because Betty is. Yes, she was a little quiet this episode, but this is without a doubt Lili Reinhart’s show – it’s her, more than anyone, who defines what Riverdale is really about. All sweet pastels and wholesome earnestness on one hand, and then violent, gothic rage on the other, neither of which really make sense and both sides of her equally compelling. It’s her, along with the inimitable Madchen Amick as her mother Alice, who both ground Riverdale and let it go completely off the rails; Archie might be cut, but it’s Betty who’s got the edge.

And the other main character of Riverdale is scandal, preferably of the gloriously gothic nature: Fred (again, Luke fucking Perry) goes through a series of crunchingly obvious surrealistic internal mind journeys as he fights his way out of a coma, Veronica (Camila Mendes) and her mother Hermione (Marisol Nichols) exchange barbed confessions in a neon-lit Catholic church, and Cheryl (Madeleine Petsch) choking out her horrendously burned mother with flawlessly glossy lips and the dead eyes of a fish gasping to death on dry land. There was a time when the CW was known for nothing more than trashy teen shows like Gossip Girl and 90210, but now it’s more David Lynch than Josh Schwartz. As Pop delivers a portentous speech about death coming to Riverdale, Jughead rolls his eyes and tells him he’s acting like a character from Friday the 13th. Riverdale knows the place it takes up in the pop culture landscape, and it doesn’t want you to forget. Even at it’s most eye-rollingly teenage, the show still has a couple of classic movie references and stunning cinematography to remind you not to get too comfortable. In this episode, Cheryl’s fabulous cream ensemble is punctuated with a single red brooch, right in the spot where Fred was shot; it’s details like this that make the show rewarding, that pat you on the back and draw you in to look closer at the details. Sometimes. As long as those details aren’t, say, Veronica or her acting skills. Or why the Pussycats are still just…around, looking like a millenial version of The Craft, and delivering everything in an interchangable monotone.

Honestly, I would like to talk about character arcs and story set-up and theories and themes and style choices, but this was just an episode of lots of little bits that reminded me why I adored the show so passionately the first time around; fantastically directed, pretty terribly written in a really pointed teenage way, and with at least three shots lingering on Archie’s abs just in case we’d forgotten about them (not that I’m that into KJ Apa, because he’s younger than me and playing a teenager and ewwww uggghhhh nooooo). As the Loose Ends killer roams Riverdale and beyond, picking off characters we all stopped caring about ten episodes ago, the show settles in for another fabulously twisted, unapologetically Riverdale season. Yes, I’ve no doubt that it’s unremitting oddness will probably start to grate at some point over this season’s run, but for the time being, I can’t fucking wait. Let’s settle in and get down on a new season of TV weirdest show.

Are you watching the new season of Riverdale? What did you make of this episode? Let me know in the comments below or hit me up on Twitter. And, as ever, if you liked this recap, please consider supporting me on Patreon!