Riverdale, or In Defense of Trash TV

I love trash TV so much that, when my boyfriend and I finished watching this first episode of Riverdale, I turned to him and said “well, I loved it, but then I guess I like trashier stuff,” and he gave me a look that was the very epitome of “well, duh.” I have been criticised in the past for following every compliment of a show I love with “…but it’s a bit shite.” I have seen every show Ryan Murphy has released in the last few years. Every. Single. One. I mean, don’t get me wrong; I love prestige television as well, but I have this sick, twisted desire to subject myself to TV with a heavy streak of sticky, seductive bullshit through it’s core. Life is a bit shit- TV should be too. That’s my justification, anyway.

So, when I heard about Riverdale, an apparently dark adaptation of the Archie comics that was pitched as The OC/Gossip Girl (depending on what you grew up with) meets Twin Peaks, I knew it would be precisely my cup of tea. I’m not going to pretend for a second that I’m acquainted with the Archie comics, beyond some deep, ingrained knowledge that I am most definitely not a Betty, but that didn’t matter. With my boyfriend re-watching Breaking Bad, I had to counter all that quality with something decidedly more my cup of tea.

And yeah, obviously, Riverdale is a teen show at it’s core, with all the problems that entails. Our leading man, Archie (played by KJ Apa) is blaphemously described as “teen Outlander” at one point in the first episode; yes, he’s got the ginger hair and the muscles, but he’s devoid of every ounce of Jamie Fraser’s character and charm. Leading man roles are often thankless, but this one is particularly gruelling, to the point where it’s hard to not bellow incoherently at the screen with annoyance every time he wanders on to it. Add to his inherently annoying nature that even one person wants to fuck him, that he writes white-guy-with-acoustic-guitar songs that we’re apparently supposed to take seriously, and, oh, happens to be the star of the football team, and he’s just teeth-grindingly unwatchable. There is an actor out there who could make this watchable, but the teenaged Apa just isn’t it, no matter how hard he strains at it. 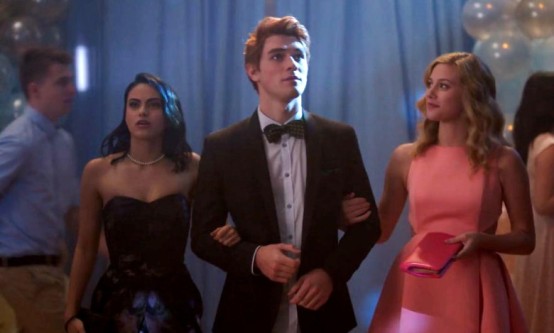 The teen drama, too, falls into familiar, overly dramatic tropes, though it seems to be doing so with a slightly knowing nod and wink. And, as I outlined above, I am seriously up for the trashier elements of it- the sex, the drinking, the fact that people apparently change dresses for parties versus afterparties. It’s all so impossibly, stupidly glamorous and sexy that I refuse to take it seriously, which I feel is the correct way to watch this show.

But, luckily, I think the rest of the cast more or less make up for it- my favourite is Veronica Lodge  (Camilla Mendes), obviously, spitting pop culture references and revelling in her own self-awareness, but Jughead (Cole Sprouse) has just the right pair of eyebrows to play the weird kid and make him more than just a grouchy, generic nerd. Machen Amick as Mother Betty is the standout of the adult cast, a Milf-ily slippery delight, but the teenagers, even more cut-throat than ever before in the age of social media, are just about enough to carry the show on their own. Hell, even Betty- popping Aderall and trying to escape the jackboot of her brittle, breaking-point mother- has swiftly turned into one of my favourite new characters of the year. As soon as the show finds some way to write Archie, preferably a la a savage How to Get Away with Murder style twist, and hooks Veronica and Betty up for good, the show will take a notable uptick. 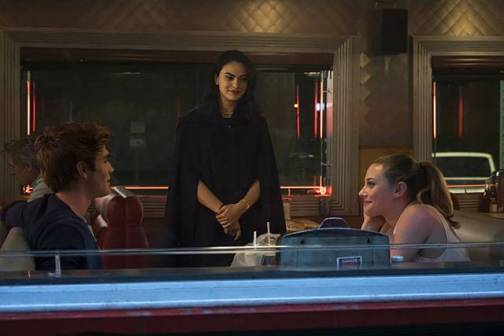 And yeah, I think the first couple of episodes focused on the teen drama elements over the creepy mystery ones, but it’s getting there. Riverdale, oddly timeless and perched on the edge of that sprawling, forbodingly gloomy body of water that’s pulled directly from a David Lynch storyboard, is an interesting setting and I’m enjoying the way the characters and the show are tugging at the threads of the sinister mystery (which involves the boy half of some oddly incestous twins turning up dead-but not wrapped in plastic- on the river’s edge). I can’t bedgrudge them taking on the mystery stuff with less aplomb than the high school drama, because Twin Peaks is a much harder sell than Gossip Girl, you know? But just because it’s dressed up as a run-of-the-mill teen drama, don’t be fooled; Riverdale is a fabulously dark gothic nightmare that just so happens to be set in a high school.

In short, I don’t think Riverdale is perfect- yeah, it’s drama can be grating, and it’s leading man can be awful, but the show is still in it’s infancy yet. And as for the dark, edgy stuff- that shows plenty of promise, with the show making use of the setting and the secrets of a small town like Riverdale to it’s advantage. I, for one, will be continuing this gloriously trashy series with great interest- are you on board? Or was it all too silly for you?

If you like my work, please consider supporting me on Patreon!