Doctor Who Review: The Return of Doctor Mysterio

An episode of Doctor Who in which no-one mentioned Clara: truly, it’s a Christmas miracle.

Nah, but seriously though: happy holidays one and all, and I hope you spent Christmas in the traditional haze of drunken, overfull perma-lounging. And, of course, with Christmas comes the Doctor Who Christmas special.

The Return of Doctor Mysterio, as this year’s episode was titled, was…well, look, it wasn’t all THAT bad. Unfortunately, Steven Moffat seems to have just cottoned on to this whole superhero thing being quite trendy at the moment, and thus DW bounded gracelessly on to that bandwagon as it has done so many others. What I’m saying is, as someone who hates most superhero media with a blind fury, I wasn’t coming at this episode shitting myself with glee. No, that was down to too much Rose wine in front of the telly after lunch, and I suppose I have to admit that despite it’s shortcomings, this episode had some bits and pieces to recommend to it.

I mean, it was moderately fun, a piece of fluff about a masked crime-fighter who the Doctor accidentally gave superpowers to as a child, and a mysterious alien agency up to no good. Since you bring it up, yes, this could well have been the plot to an episode of The Flash or Legends of Tomorrow, almost as though Moffat realizes his time is coming to an end and is looking for someone else to work ahem DCTV universe, but that doesn’t make it shite by proxy. I thought Justin Chatswin, who played the main character and superhero The Ghost, was moderately charming, and I thought Charity Wakefield’s performance as an intrepid reporter chasing down the story of a lifetime was pretty fun. As always, it’s great to Capaldi in this role, and Matt Lucas really Frank-Skinner’d it- by which I mean, was an actor I didn’t like who pulled off an endearing performance in this episode. 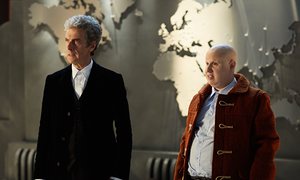 I know you’re just aching for me to get to the “but” of this sentence, and trust me, I have many. Despite attempts to make Charity Wakefield’s character leap off the screen as a fully-realized person- most of which boiled down to the Doctor calling her “clever”, but you know- she winds up bemoaning her dating life in what’s ostensibly the biggest interview of her life before getting Damselled and then snogging the guy who’d been making puppy-eyes at her for more than twenty-four years. The romantic plot took a front seat and the cool alien sci-fi stuff ended up jumbled about in the background, which is not how I want my Doctor Who to go. It felt rushed, even with an hour’s run time, and yet still found space for the Doctor to be WAHOO WACKY more times than I cared for. I mean, this is far from the worst episode Moffat has ever  helmed- as long as The Girl who Lived and Hell Bent walk this Earth unscathed, it will remain so- but the whole thing felt a bit…sloppy.

Yes, it’s no Christmas without Lou merrily shitting on your good time. And this Christmas special really served as a reminder of just how bloody good Steven Moffat’s scripts used to be- you remember Blink, in all it’s majesty, with all those moving parts that slot into place perfectly? Or the Empty Child/Doctor Dances story, with it’s well-defined supporting cast, moving emotional arc and perfect blend of horror and humour? Or…you know, I’m sure you could come up with your own favourites with their own unique selling points, because dammit, this man has or had some serious talent for writing superb stories for this show. Maybe the showrunning position went to his head, but there are two many blunt edges, too many niggly little plot holes, too many characters who feel more like wheezing stereotypes than anything else. I’m not saying a Christmas special should be a swooping Dickensian masterpiece or anything, but it shouldn’t crumble under even the mildest scrutiny.

If you’d like to read more of my Doctor Who reviews, you can find them here in all their ragey, descending-into-a-pit-of-unassailing-biterness glory. Well, I’ll be back for my best-of lists- and one last Vikings recap, of course- before the end of the year. I hope you enjoy the rest of your holidays, and please tell me- what are you watching to uphold the festive spirit?