Vikings Recaps, S4, E14: In the Uncertain Hour Before The Morning

It’s an impressive show that can relegate a major character death to the back burner of a mid-season episode, but Vikings did just that- even as Slaugy brought it at the hands of Lagertha in what was, for my money, Alyssa Sutherland’s best scene in her run on the show, Vikings returned instead to the major conflict that has always been the driving force behind the show: religion.

I wrote back in my first gush over this show that, while you might go into Vikings expecting swashbuckling fight scenes with people in the funny spike hats, the show has always wrapped itself around the clash of Viking and Christian culture, with religion at the centre of that. And, as Ragnar and Ecbert come together again with a whole lot of catching up to do, the schisms between their cultures becomes the focus of In The Uncertain Hour Before The Morning.

And, I mean, yeah- I’ve been waiting for Linus Roach and Travis Fimmel to be back on screen together with baited breath for an embarrassingly long time. These two characters are each other’s parallels (a concept explored in the great, reflective direction from Sarah Harding), and this episode revelled in that. The majority of the episode is just the pair of them drunkenly lounging around and talking about death, and it’s bloody brilliant. I say it almost every week, but how this show hasn’t won fistfuls of awards for it’s actors is just beyond me.

But yes, death is the key to this episode. Ragnar wants it, Aslaug gets it, and Athelstan’s distant murder still hangs heavy in the hearts of those left behind. Ecbert exasperatedly mocks the Vikings’ obsession with death, a concept illustrated by Lagertha allowing her viscous rival Asluag a proper funeral- despite their status as mortal enemies, a dishonourable burial is not something she could allow to pass under her watch. But it’s a fair point the English king makes- one of Vikings’ key moments comes in series one during a human sacrifice, when a young Bjorn snaps at a balking Athelstan “It’s only death”. Death is both enormous and pedestrian, incredibly important and an everyday act in Viking society, a fascinating contradiction that is explored in this episode. Ecbert can’t understand why Vikings would look forward to going to Valhalla when they fight and kill each other every day- but it makes perfect sense, with death such an enormous part of the mysticism the show assigns to Viking culture. 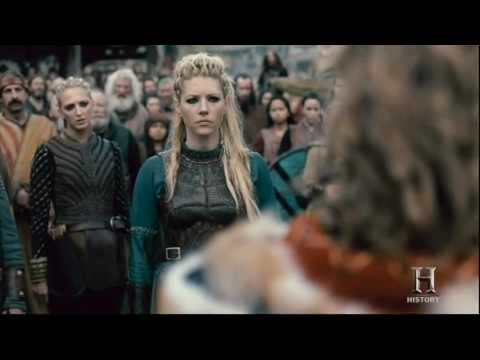 Of course, with Ragnar back in England, Christianity and it’s place in the show gets an airing too. Ecbert’s best scenes are almost always his monologues to God, and this is no different- in another just gorgeously shot scene, he kneels in a room full of candles and Christian iconography and prays for help on what to do about Ragnar. And while that’s another great chance for Roach to rock the hell out of this role, it’s Athelstan who’s the most important thing about this episode.

In fact, Athelstan could well be the most important thing about Vikings. He represents the show’s duality, one foot in Viking culture and the other in Christian. He provided a bridge between Ecbert and Ragnar, a bridge that is missing in their raw, accusatory encounter. But it was this duality that caused some horrific acts of violence to be meted out against him- both his crucifixion by the English and his murder by Floki. Athelstan is the grim reminder that the Vikings can’t have it both ways. Christianity and Viking culture will never exist in harmony with each other, and the show doesn’t want us to forget that- because the uneasy alliance as Ragnar, Ecbert and company attempt to reconcile the two makes for some magnificent television.