Hi, honestly, I’ve just written this post because I want to talk about Trufa, the dog my parents are fostering right now and maybe the love of my life. 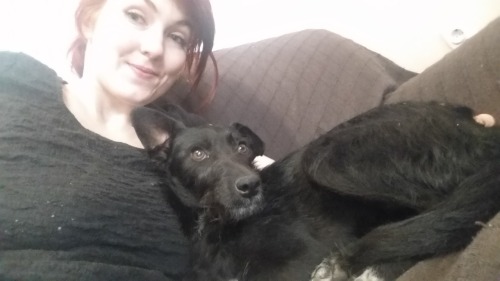 Look at her. LOOK at her. Look at her. Her little mismatching ears! Her white beard! She’s so distinguished! I only got to spend a few days with her and I’m honestly devastated. My cat who? We stan Trufa in this house. And speaking of bitches (heh), let’s get to me.

I’ve written before in these posts about the odd shock of finding out that the way your brain works isn’t actually the way everyone else’s brain works. For the last few months, I’ve been thinking of the way my mind processes things as “wrong”, which in some ways, it is – I mean, there’s not a lot of rationality in thinking that if I do something twice, I have to do it nine times or else The Unspecified But Extremely Serious and Very Real Bad Thing will happen.

And I kind of always knew that, on something level, but I’ve been thinking a lot recently about the notion of irrationality and OCD. It’s a really strange thing to explain to people who ask me why I can’t just not do the compulsion that my mind tells me I have to do, even though I know it has no rational place in my life. I would consider myself a somewhat intelligent halfwit, so I know that the actions I take to rescue myself from percieved doom are utterly useless, and yet, the thought of not doing them is just a brick wall in my head. It doesn’t work that way. I have to do it, because that’s just the way it works, the way it always has.

OCD is an illness, for me, that revolves around control, but the way that control exerts itself is through complete irrationality. Here are a list of things I have done today as part of my compulsions in order to keep myself and the people I love safe: checked the door was locked nine times in a row, made sure to throw two beans into the bin so that they could keep each other company, turned the book I was reading to page ninety-nine before I left the house. These are pretty mild, in the grand scheme, but things can take a nasty turn when I start self-harming and restricting food as a way of maintaining control. I know that these things have basically no logical bearing on the way that my day unfolds, but the thought of not doing them has never crossed my mind in a serious way. They’re mild, sure, but they actually take up a dumb amount of my time, time that I could be using to write or pet the cat or watching shipping edits of SuperCorp on Youtube like a decent human adult.

Knowing that a lot of my anxiety comes from a malfunction in my brain has actually been helpful for me when it comes to addressing the nonsense-space they take up in my mind. And yet, there’s still this irrational need to take care of the compulsions that are meant to protect me. Rationality and irrationality come crashing up against each other, and the shit that doesn’t make sense always wins.

So, I’m at impasse, the logical part of my brain in a nice suit and a squint tie facing off against the dumbass gurgling, Bill-Skarsgard-as-Pennywise shitposting part of it in a bad haircut it did itself. Right now, I’m in the process of trying to armour my sensible side with all the weapons it needs to win this stupid stand-off – but stopping things that you’ve done your entire life as a matter of course is proving harder than I thought. My main focus has been distress tolerance – basically, learning to sit with bad feelings instead of papering over them desperately with stuff that’s useless and eats into my time in a negative way – which basically involves doing a lot of worksheets for my therapist because at heart, I am still Lisa Simpson in The PTA Disbands and I’m ever so smart. But, for now, the best I can do is recognize the irrationality, even when I still feel the urge to act on it. And hopefully, one of these days, the logical side of my brain is actually going to start winning out more often than not, and I can get on with shit that actually matters.

If you’ve dealt with compulsions, and specifically trying to overcome them, I would love to hear about what’s worked for you – please drop them in the comments below, or hit me up on Twitter or Tumblr. If you enjoyed this article, please consider supporting me on Patreon for exclusive perks. Oh, and, as always, buy my fucking book!