The One With the Eating Disorder

Hating my body was the easiest thing in the world. 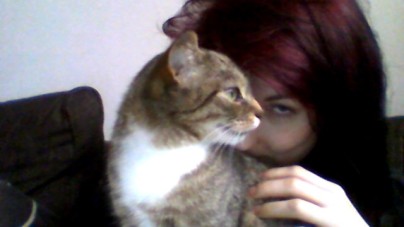 I’ve always had something of an addictive personality; when I first started drinking, I drank until I had to be peeled off the floor of the ladies’ bathroom on my eighteenth birthday. When I smoked, I puffed through twenty, thirty in a day. When I started writing, I was churning out fifty thousand words a week in blogs and fiction and ghostwriting. When I started to self-harm, I practically sawed off my left arm in a matter of months. When other substances came into my life, I threw myself at them with the kind of aplomb that encouraged a friend at the time to take me aside and let me know that everyone who knew me was moderately worried I was going to die. Obsession? Pah. Watch me take it nuclear and then spend the next six months trying to crawl out of the crater I left in my wake. If you put something in front of me that stops my brain angrily chattering away to itself for more than eight seconds at a time, I’ll stuff myself Mr-Creosote full of it.

But, in the last year, I decided that I was going to stop treating my body like a dogshit and actually take care of myself. The aforementioned years of binge drinking and smoking and eating everything anyone put in front of me meant that I’d gained somewhere in the realm of fifty pounds: I’ve written about my struggle with getting used to the weight gain before, and around this time last year, I wrote about my first flush of getting healthier. And I meant everything I wrote then. I wasn’t making any of it up. I really was trying to get used to my new body, to understand that now I was an adult I was never going to look the way I did at sixteen and that I shouldn’t want to. But, as I slowly started to give up all the chemical crutches I’d used to keep my brain quiet enough for me to function, I found that the endless chattering was back. I quit smoking (which I wrote about here), I cut down on drinking, I started to lose weight – this was Optimus Lou, me in prime, smug form. And I was actually happy with it. For a while.

It started pretty slowly for me. Just counting calories, to make sure that I wasn’t eating too much – don’t want to undercut my hard work by eating an extra cookie, right? I watched those numbers like a hawk – sixteen hundred, then fifteen, fourteen, thirteen. It became a game with myself to see how far I could pull them down. A thousand. Less. I started working out more, an hour and a half a day, every day of the week. I would frantically chew gum through the week and my body would demand those lost calories back, and I would cram myself full of food for a day and then throw it all up in a panic, disgusted with myself at my lack of control. This cycle would happen a couple of times a week, sometimes more, often when my partner was out of town and couldn’t see how vile I was being. My period stopped. I started taking laxatives a few times a week, just to move the water weight. I felt dizzy most of the time, and my writing took a sharp nosedive as I could never seem to clear the fog in my head.

I know what you’re thinking: how the fuck could I not tell there was something wrong by that point? And let me stop you right there and tell you this: I never, in a million years, thought I would be the person who had a problem with food. But the thing is, for me, this kind of control over myself became an addiction that replaced the crutches I’d been using before. The high I would get just from watching that scale go down, from the triumph of lying there in bed at night and knowing I’d eaten less than I had the day before, wondering how I could cut my calories further the following one. Hating my body was the easiest addiction I’d ever had – I didn’t have to go down to the corner shop to pick up a twenty-deck of it, I didn’t have to go out to a bar and take it in shots. I just needed to wake up in the morning and feel my hips, my ribs, my wrists, my collarbones (a ritual I still find myself doing pretty regularly, even now) and base the rest of my day on how prominent they felt. It was quiet, simple, and the focus on that let the chattering in my brain shut off for a while.

But the other thing about this (I don’t really know what to refer to this experience as, since I was far too embarrassed to go to the doctor with it, but I do know that my actions over a big chunk of last year fit the clinical diagnosis for bulimia, in various forms) is that it’s one of the only addictions that will actually get you positive feedback from the people around you. Now, to be very clear, I hold nothing against and don’t blame one bit the people who complimented or supported me on my weight loss, because they had no clue what the hell I was doing to myself since I was so careful to hide it. But the fact of the matter is, we value thinness; if you lose weight, people will compliment you on it first before they ask how it happened, the issue not whether or not you’re healthy but whether or not you’re thin. I could post progress photos and earn easy praise for my hard work. And, as Lisa Simpson made flesh, I enjoyed that attention, that reassurance that this was all alright because people liked me better this way. I just hate to stick at this endless war with my body, the visceral, inward-facing hatred that felt as though it was digging out a bigger and bigger hole in me with every passing day, and people would like me better for it. Seemed like a fair trade-off for me. I got to shut my brain up, exert intense control over something in my life, and a chance to indulge my addictive side in return. I would take it.

And all this was about making sure there was less of me. People would compliment my muscle definition or my self-control, and yet the only thing going through my mind was thin thin thin thin thin. I can still remember, in golden-hued flashback form, the times when people called me skinny. That’s as pathetic as it sounds, by the way, even in my own head. I wanted nothing more than to whittle myself away to nothing, to flimsy skin and bone. I would browse the pro-anorexia tags on social media and look longingly at their fingernail-width limbs and pretend I was doing research for an article. I never wrote it. The chattering in my head had quietened to one voice, a voice that told me to shut up and take up less space.

It wasn’t until I had to deal with some unrelated, slightly unpleasant shit in September that I realized I might have a problem: after said shit went down, I instantly stuffed myself full of food, threw it all up, and then immediately did it again the next day. It didn’t make me feel better. I remember looking at an empty sleeve of Hobnobs (the most pathos-filled baked good) and realizing that the answer to dealing with my problems wasn’t in food – either the lack of it or the over-consumption of it. And it was then that it all hit me what a waste this had all been.

And that’s been the hardest thing for me to deal with as I try and move on with my life: what a waste of fucking time the entire endeavor had been. Sure, I lost the weight, but I didn’t have any good times to look back on, not the way I did drinking or smoking. Hating my body, restricting my food, bingeing and purging and working out so much that sometimes it was hard to think straight: it hadn’t gotten me anywhere. I remember looking at a photograph, a photo from a holiday I took late in the year, and thinking that I looked slightly thin. That was it. Other than that, it had been nothing but a pointless suck on my brain energy, something that had done nothing to improve my life or the lives of the people around me. So what the fuck was I doing?

I’d love it if I could end this on a high note and have a picture of me eating a big pastry and grinning and not giving a fuck, but the truth is this is all relatively recent and I’m still dealing with the fallout of all it. I don’t track my calories any more (I had to block those apps from my computer, actually) and I keep my exercise to five days a week at no longer than an hour, though I still find myself trying to come up with ways to circumvent that. My period came back (in fact, the first one I had felt like all the ones I’d missed put together, so that was a bloodbath) and I started to go out with people and actually eat again, as opposed to laughingly chowing down on something while crunching the numbers on how long I could wait before I couldn’t toss it up. But I’m getting there. I’ve hidden a lot of this from most of the people close to me, just because I was so embarrassed at what I had let myself fall into. Even now, as I get better, I find myself working more, something to make up that dead space in my brain. Maybe I’ll end up stuck on something else, something more or less healthy. Who knows.

I still have a lot of fear around food, and I still find myself slipping back into restrictive mindsets when things get tough and my brain starts chattering – it’s hard, given that a lot of my work revolves around social media, not to get drawn in by the sight of taut bodies and sculpted abs and want that for myself. Sometimes, I even find myself sneaking on to those pro-anorexia sites and looking at those women who look like people have constructed theme entirely from fingers, and I wonder what it would feel like to look that way too. But then I remind myself – for me, it would look like the bottom of a pit I have already spent too much of my time staring into, and I have better things to do than start spelunking my way down.

Here are some of the resources I found really helpful in starting to get better with food and exercise, in case that’s something you need help with:

If you enjoyed this article and want to see more stuff like it, please consider supporting me on Patreon