Harry Potter and the Philosopher’s Stone: Chapter One

So, with the Carrie Recaps over and done with, it’s time to take a look at another book. And I really wanted to go with something that was huge not just to my development as a reader and writer, but that had a cultural impact to match. Something that defined my early years of reading and did for so many other people too. Something so inescapably gigantic that it has cast a long shadow across more than two decades of popular culture, something that defined my generation’s relationship to books, storytelling, and character more than any other. And that means… 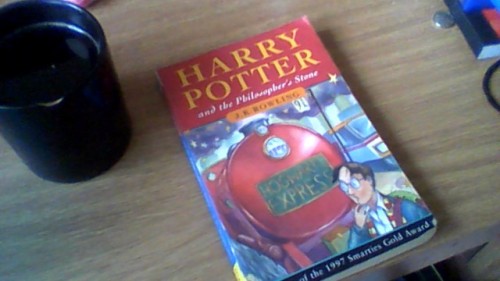 To say that these books were a big part of my childhood would be an almost offensive understatement. When I was in single-digits, my very first crush and I would race through the first four books together over and over and over again, both trying to overtake each other to squeeze in the extra chapter just so we could be the ones to win it; for some reason, my ability to read quite fast didn’t win his heart, but the books won mine, and I became obsessed with them. I took the Stephen Fry audiobooks on long car journeys; I wanted to climb inside the films and live there. These were the first books I read that featured actual character arc, actual mysteries, actual lore. Harry Potter was for me, and so many other people, my introduction to the world of real literature. I have my first novel coming out this year, and when I trace back my urge to write, it started with this series.

But I’m going to be honest with you here and say that the last few years, I have really fallen out of love with the series. Not because I don’t like it anymore, but everything that surrounds it is just so fucking much. From JK Rowling trying to retcon her original novel series into modern progressivism to the die-hard side to the fanbase who introduce themselves through their Hogwarts house assignation, Harry Potter is fucking inescapable. To call it a cultural behemoth doesn’t come close to doing it justice: there’s no precedent for the punishing omnipresence that this series still has in popular culture. And I’m sorry, maybe I’m fucking misery-guts muggle, but anything that’s shoved so aggressively down my throat so constantly gets tiresome, no matter how much love I might have once had for it. When I think about Harry Potter now, I don’t look back with the keen nostalgia I had for the series: I look forward, to another six films and three social-justice-themed retcons and eight encounters with people very keen to explain their Deathly Hallows tattoos to me, and I’m just exhausted by the thought of it.

So I want to take this back to the start. Book one. Take a look at the series outside of the juggernaut that it’s become, to remind myself what drew me to these books in the first place. Without further ado: Harry Potter and the Philosopher’s Stone, Chapter One: The Boy Who Lived.

The book famously opens with an introduction to the Dursleys, Harry’s adoptive family, and this is just prime slightly surreal but bitingly sharp Roald Dahl stuff right here:

“He was a big beefy man with hardly any neck , although he did have a very large moustache. Mrs Dursley was thin and blonde and had nearly twice the usual amount of neck, which came in very useful as she spent so much of her time craning over garden fences, spying on the neighbours.”

(also, this book came out at a time when fat people were pretty much just evil in children’s literature, though I have no doubt that JK will try and actually explain that by “big beefy man” she meant “thin skinny fellow” and that there isn’t a HINT of fatphobia in her book thank you SO much)

We open in a flashback here, as the Dursleys recieve Harry Potter after the death of his parents. And I do love the way Rowling introduces this world to us, but guiding us into it through the lens of the most pointedly boring family imaginable. As Mr Dursley drives to work, he spots a cat reading a map, and in my head, this is just Maggie Smith in a pair of cheap Halloween cat ears glancing up and deadpanning “miaow” in his direction. Anyway, over the course of the day, he continues to notice odd things going on: people in cloaks are congregating, and he believes he hears a mention of his nephew, Harry. He accidentally knocks over one of the cloaked people, and apologizes, but they seem unperturbed:

“Don’t be sorry, dear sir, for nothing could perturb me this day! Rejoice, for You-Know-Who is gone at last! Even muggles like yourself should be celebrating, for this is a happy, happy day!”

I like this, I do. Vernon Dursley is an audience surrogate here, which is exactly what this first chapter needs – someone to introduce us to the incongruency of this wizarding world with our own. And while we all know who You-Know-Who is now, I still remember reading this for the first time and being pretty fascinated by the notion of a villain people are too scared to even name. It brings to mind old spooky stories about summoning a monster by saying their name, underlining the deep supernatural evil of Voldemort (whose name literally translates as “Flight from Death”, which is actually pretty cool).

Vernon returns home and attempts to dismiss all the weirdness he’s encountered that day, and finds the cat from that morning still sitting on the street. He asks Petunia about her sister, and she dismisses him swiftly and angrily. They go to sleep and Vernon assures himself that nothing is going to come of the odd events of that day.

And then we’re back to the street outside, where we meet Professor Dumbledore for the first time. I’m going to be honest with you: when I first heard that Dumbledore was meant to be gay, I was pretty happy with it, and I thought it made sense for his character as a whole: the series reveals deep and ambiguous relationships with men, and there were certain elements of camp to his character, as well as hints at his outsider status even within the wizarding world. But at the same time, I do find myself more and more cynical about the decision to have be gay, given that the Fantastic Beasts movies don’t seem to have plans to address it and it feels more like a back-pat for progressivism without putting in the real effort to explore what a gay character would mean to this community and Dumbledore as a person. With all that said, I still really enjoy his character as he is in the books, and I’m going to be looking at him through the lens of his sexuality just to see how many, if any, hints there are at it.

Dumbledore puts the lights in the street around him out, and then goes to the cat, who is, of course, MVFUCKINGP Professor McGonagall; she shifts back into her human form, and I’m reminded once more that this book doesn’t have the fucking balls to have people be naked after they shift, which is really what makes more logical sense. Headcanon: in this scene, McGonagall is starkers and still has more presence and command than any other character in this book.

McGonagall, nude, confronts Dumbledore about the recklessness of the rest of the wizarding community in celebrating the apparent death of Voldemore. And, in fact, this is the first time we hear his name:

“My dear professor, surely a sensible person like yourself can call him by his name?…for eleven years, I have been trying to persuade people to call him by his proper name: Voldemort…I have never seen any reason to be afraid of saying You-Know-Who’s name.”

Again, this is just some neat introduction for both McGonagall and Dumbledore as well as Voldemort. McGonagall, despite her brusqueness, is still as scared as the rest of them – Dumbledore, while gentler and more eccentric in this scene, isn’t.

McGonagall tells Dumbledore that it’s easy for him because he’s the only one Voldemort was scared of, and implies that he is in posession of similair powers that he has chosen not to use. And then we get into the actual start of Harry’s arc, as Dumbledore confirms that Harry’s parents were killed by Voldemort but that he couldn’t kill the child:

“After all he’s done…all the people he’s killed…he couldn’t kill a little boy?”

This is such an intriguing set-up. It’s almost hard to remember a time when the story of Harry Potter wasn’t assimilated in it’s totality to our cultural consciousness, but this is such a neat mystery to play with. Why couldn’t Voldemort kill him? Why did it break him? I mean, we all know the answers, but that doesn’t mean this isn’t some juicy prologue shit right here.

Dumbledore explains his reasons for giving Harry to the Dursleys – that he would be too famous in the wizarding world after what happened and that after everything he’d already been through, he needed somewhere with more normalcy. Which is a pretty good reason, all things considered, but still doesn’t explain why nobody intervenes when he is consistently abused for the following decade.

Hagrid rocks up next, and I am so happy to have back my Biggest Childhood Crush – Rowling introduces him, flying in on his motorbike, as “too big to be allowed”, and frankly I’m already swooning. I’m a size queen, in that I only want men who’s feet can be described as “baby dolphins” and who are literally half-giant, so there. Hagrid is visibly devastated by the death of Lily and James (Harry’s parents) and I just love how emotional and sweet he’s allowed to be from the start. Hagrid is the animal rights activist woodsman of my fuckin’ dreams, and what I always loved about him was his deep emotional range and ability to express that. Harry has so many father figures over the course of this series, and Hagrid is by far my favorite. We also get our first little nod to another father figure, as Hagrid tells them that he needs to take Sirius his bike back. And I’m sorry, but it’s still utter bullshit to me that Harry isn’t with Sirius from the start, but we’ll get into family matters more once Harry is situated with his Aunt and Uncle.

And we close out the chapter with the infant Harry sleeping on the doorstep of his new home (which is more prime fucking bullshit to be honest – what the fuck, they couldn’t just knock on the door and then animagus into streetlamps or something? As established earlier, it’s the middle of winter and they just dumped a kid on a doorstep in the dark of night!). He doesn’t know he’s special, and doesn’t know who he’ll be to the wizarding world – but soon, he’ll find out, and we will, too.

And that’s us for the first week! If you enjoyed this recap and want to see more stuff like it, please consider supporting me on Patreon! You can also find more of my writing on my film site, No But Listen.