We’re rounding the final bend for this season of American Horror Story, and, as ever, things are coming apart. But this season, it feels like they might just be coming together, too. Bear with me: this is going to be a long, odd one.

I mean, don’t get me wrong, this episode is a fucking state: any forty minutes of TV in which both Billy Eichner and Evan Peters play Charles Manson (in some more ill-advised reconstructions, just like last week) is going to be a little off the wall from the baseline up, but when you throw in Frances Conroy as a disciple of Valerie Solanas, an undead Cheyenne Jackson having a heart-to-chest-cavity with his brother, and Evan Peters crunching down Adderal like me trying to finish eighteen university essays in one night, this is just a batshit unhinged episode that’s barely holding together as we enter into the finale for this bizarre, compelling story. This is episode is called Charles Manson in Charge, for the love of fuck. It’s stupid. It’s ridiculous. I can’t look away. 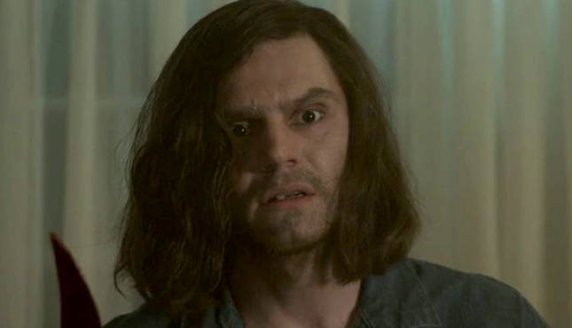 And there’s one thing holding all this together, this episode that investigates the falling-off of Kai’s sanity as he attempts to hold the cult together, and that’s Evan Peters. This might be my favourite performance of his in the season yet; he’s utterly and completely off the rails, hearing voices, talking with versions of himself, and desperately trying to oust a supposed mole inside the cult – a plot that ends with him violently choking his sister to death while bawling his eyes out. Look, it’s the kind of totally marmite performances that is either going to win him an armful of awards or not even land a single nomination: brilliant in it’s weird and weird in it’s brilliance. The direction in the episode is all about those camera-shoving full-face close-ups on him, and there’s no waver in conviction in Peters’ performance. We all love Peters as Tate Langdon from the first season of AHS, but this is six years later and Kai is a far less refined, less charming kind of evil that Peters embodies with this repulsive charisma that I’m addicted to. It’s a bravura performance that I can’t wait to watch again in one go, and might be the oddest performance I’ve seen all year.

Me too Evan. Me too.

There was also a neat little moment between Beverly Hope and Winter that got me thinking – Winter apologises to Beverly for throwing her under the bus for the murders they committed together, after seeing Beverly visibly traumatized by the punishments she had to endure for her part in them. With the privileged and often oblivious Winter trying to make things right with a black woman she already used for her own selfish means; in case you missed it, a lot of white feminists have a habit of forgetting or even scapegoating women of colour in their feminism in real life, too, and I’m pretty sure that’s what this scene was critiquing as Winter desperately tries to make things right after the damage has long been done. It’s not much, but it’s enough to make me think this show has some grasp on what it’s attemtping to satirize.

Chaz Bono, too, gets a look-in for the first time this episode – and yes, of course, it’s because he’s getting killed off. At this point, Cult is slamming through it’s main cast and supporting characters so quickly I’d be surprised if so much as the extras we glimpsed in episode one are still alive by the end of next week’s finale – I don’t mind a season where death actually means something for once, but it’s kind of a shame that characters like Bono’s Gary and Cheyenne Jackson’s Vincent get so little screentime to allow for a bit more bloodshed. Bono’s performance in his final scene caught me off-guard in it’s nuance and vulnerability considering that he’s mostly been just yelling for the majority of this season, and made me sad that we didn’t get a little more of this range that he’s been hiding. Ah, well – maybe next year, if Bono chooses to come back, which I hope he does.

And the show’s decimation of it’s cast isn’t the only thing that feels off about this episode. No, the plot is barely clinging together as Ryan Murphy and Brad Falchuk (who wrote this episode) toss in the requisite amount of mind-buggeringly dumb plot twists that each season of AHS has an apparent quota of. This week, it’s revealed that Frances Conroy enlisted Evan Peters in an attempt to unleash decades of repressed female rage in order to wipe out the male gender. Yes, it’s fun watching Conroy shriek that Peters is a “walking abortion” and I actually found the notion of the power of women’s fury pretty interesting, but the episode backtracks on that almost at once as Kai gleefully reveals that he pursued power not for feminism but for himself, which is obvious to anyone with half a mind. Can you explain the plot of this season in less than a hundred words? It’s flailing out of control in a way that just so happens to be entertaining, but that doesn’t mean it makes sense or even remotely works.

This scene was probably the best-directed ten minutes of the season, for what it’s worth.

Sarah Paulson is still stalking around in the closest thing to a villanous role she’s had in seven years on this show, which is fun, and her machinations are entertaining, but I have to admit that the show uh-med and ah-ed with her plot so much that I’m running short on patience for Ally. I’ve enjoyed her descent into madness and violence well enough, but not as much as I might have enjoyed, say, the aforementioned Bono getting some more screentime to explore exactly what drives his character to the viscous fanaticism that we see embodied in his final moments. Also, where the fuck is Oz, Ally’s son? Her entire plot was meant to be in aid of getting him back and he just isn’t in this episode at all, which is throwing me off a little. Maybe if her plot was a little more grounded in him and her reasons for doing this, it might land a little stronger. Meh.

So overall, I think this episode is a complete fucking mess: the Manson murder reconstructions are violent and overlong, some scenes sprawling and indulgent, some outright fucking stupid and nonsensical. But it’s a beautifully directed, phenomenally acted, and occasionally impactful second-last entry to this season – and I, for one, can’t wait to see how they pull it all together. If you want to catch up on my recaps for this season, start here!

If you liked this recap and want to see more stuff like it, please consider supporting me on Patreon or heading over to my newly-launched film site!