This fucking show, man. I swear, every time I write a bad review (like last week), it comes back with an episode packed to the gills with reminders as to what it was I loved so much about American Horror Story in the first place. 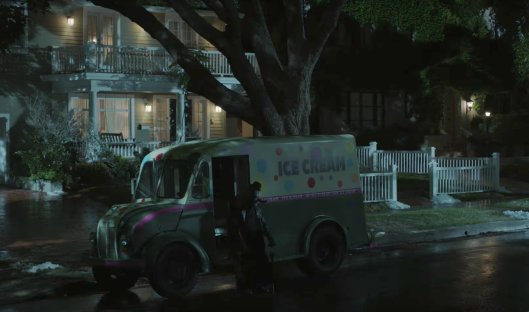 Now, Neighbors From Hell is still objectively bad, in many ways; the plot requires a high level of suspension of disbelief for anything to hang together, and we’ve still edged forward a frustratingly minor amount in the overall arc of the season considering that we’re almost a full third of the way in. I’m not sure there’ll ever be a truly perfect episode of AHS (I don’t know, maybe the back half of the I Am Anne Frank two-parter from Asylum?) – and hell, in terms of storytelling or character development or any of the elements that generally make an episode satisfying, the third episode of the season falls short. But damn it all if it isn’t the most entertained I’ve been by the show in ages.

A savagely unsettling cold open heralds this episode’s arrival, with a woman thanking her therapist (Cheyenne Jackson) for overcoming her fear of being trapped inside a coffin while still alive. Her and her husband return home, go to get frisky, and then are both sealed inside coffins and left to die by the clown cult who took out the Changs earlier in the season. Maybe it’s just me, but these first five minutes twinged something in me that all the blood and gore of last season couldn’t. Ugh. It’s giving me the heebie-jeebies just thinking about it.

So yeah, American Horror Story seems to have remembered the middle part of it’s moniker for a change (and interpreted to mean more than just “giblets”), which was nice. But what really made this episode feel like a return to form was how fucking funny it was.

This is a great bleach job, I’ll give him that.

One of the best things about Murder House is that perfectly pitched, ice-cold sense of humour that it managed to weave into the weirdness of the season as a whole. In fact, an episode from Neighbours from Hell brought me back to one of my favourite character introductions of the entire show’s run – Denis O’Hare turning up as Burn Face Larry on Dylan Mcdermitt’s front porch. In season seven, of course, it’s not Denis O’Hare, but Billy Eichner and Leslie Grossman on a doorstep in enormous sombreros throwing Taco Bell vouchers at Sarah Paulson in a ham-fisted critique of her alleged racism. Like Denis O’Hare’s introduction, the scene has this kind of broad, manic energy, and is so utterly committed to the bit that you can’t help but get swept along – and anything that reminds me of Denis O’Hare in any respect is good news. This kind of big, goofy humour (Adina Porter looking po-faced down camera and announcing “coming to you from a community gripped by fear” had me screaming) wraps around the creepier elements of this episode and handle the transitions well enough that the bouncing between tones feels deft instead of daft. All credit to writer James Wong, who seems to actually have a grasp on how the show should balance satire and scariness. And while we’re here, I thought Gwyneth Holder-Payton did an awesome job with directing Neighbors from Hell, giving the episode a visual cohesiveness that the previous two outings have lacked. 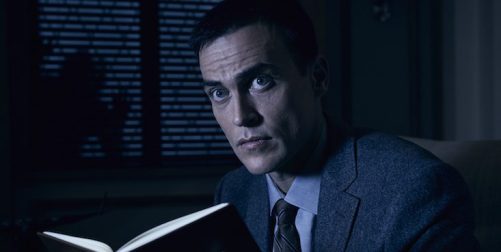 There are also some sensationally fun performances from the male end of the cast this week (Sarah Paulson and Allison Pill continue to bear the brunt of the less hammy and therefore less fun end of the plot, but are still great) – Billy Eichner, flailing, shrieking, covered in blood, is maybe the highlight of the episode, but Cheyenne Jackson’s pointedly neutral Dr Vincent dips between slightly creepy and oh, no, he couldn’t, he’s too sweet with a considered tightness. Evan Peters, popping up at windows 2K17, is really leaning into Kai and imbuing him with more presence and potency than the script should really allow. Fuck, even perenially blank-faced Colton Haynes manages to pull off his whole thing as the ice-cold peroxide cop well enough. 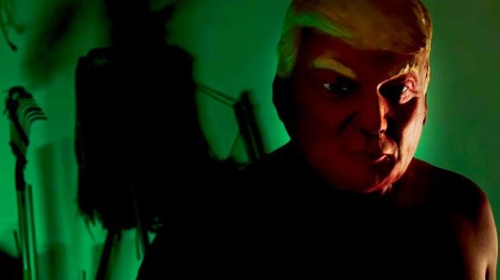 But I think, more than all the back-and-forth about the clowns and the murders and just how many walls smeared ominously in blood that little boy is going to have to stare at over the course of this season, what made this episode really great was it’s refusal to offer up character we could sympathise with. Whatever’s going on with Sarah Paulson, our ostensible leading character – whether it’s in her head or not – we’re shown time and time again that she’s kind of a shitty person, self-involved and faux-progressive, with this episode leaning into that particularly hard. And no-one else emerges to take her place as the one character we can get behind. Good satire means no good guys, and while that’s going to be a difficult conceit to build a compelling story around, it makes the jokes land harder and the season’s political targets feel broader.

I know that next week the show is likely going to heavily dissapoint me, because that’s always the way with AHS; for every great episode, there’s a pile of poorly thought-out dreck to match to it. So, tune in next week while I kick myself for letting this show pull me back in again!

If you liked this review and would like to see more stuff like it, please consider supporting me on Patreon!