American Horror Story Recaps: Don’t Be Afraid of the Dark

All is not well in American suburbia. But when is it ever?

So we’re back with another episode of American Horror Story’s seventh season, and I’m swiftly realizing what a terrible mistake it was to decide to recap Cult. Because this episode, Don’t Be Afraid of The Dark, bore the hallmarks of all the show’s worst habits coming out to play once more, like a killer clown lurking in the shadows that you just know is bearing down to pounce on you.

This is the political season, right? The one that takes on the temperature and fear that has permeated America after Trump’s election. As I said last week, there’s room for something interesting in that, as great, memorable horror is often so couched in political commentary (Dawn of the Dead being one of the most popular classic examples, and more modern entries to the canon – like Train to Busan and Under the Shadow – carrying on the torch). There’s room for a really interesting story here, but, as ever, American Horror Story isn’t the show to tell it.

I will never stop asking what the fuck this entire sequence was, never, not once

I get that the show has always painted in broad strokes, but this episode seems to be working on a different canvas entirely that the one it should be aiming for. Evan Peters, having used the violent confrontation he instigated the week before as a platform to run for city councillor on, could be a really chilling character examining the way that closeted assholes have used the rise of pro-Trump sentiment to regain power they feel was stripped from them under more progressive leadership, but instead he’s a shrieking liberal stereotype of what the alt-right looks like. “Where do you get your information?” Ally asks after he turns up at her door in an attempt to scare her into giving him his vote. “Facebook,” he shrugs blankly back. I don’t particularly want to sit here and analyse the damage the politics of a season like this could mete out, but Kai is nothing more than a frustratingly ugly caricature. If the show really leaned in to it’s campy ridiculousness, it might just get away with it, but it seems intent on clinging on to it’s attempts at Politics with a capital P and it’s just…stupid. Especially for an actor as talented as Evan Peters. 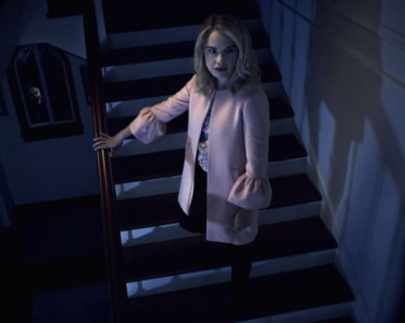 All the press photos are better-looking than the show has been so far, by the way

And while were on politics, this has to be one of the whitest seasons the show has ever produced in terms of it’s main cast. Now, the setting makes that understandable, but this week they introduce an American-born Latino character, who becomes a suspect in the murder of a manager at Ally and Ivy’s butchery. Ah, now here’s a chance for the show to move outside of the lily-white liberalness it’s trying to critique – oh, what’s that, he was shot presumably dead at the end of the episode for a cheap cliffhanger after what amounted to three lines of unsubtle exposition? Seems about right. They introduced a non-white character just to have him die a scene or two later to advance a white character’s plot (it’s Ally, in a fit of paranoia, who shoots him). For a show that aligns itself so strongly with the progressive, it could do with putting it’s money where it’s mouth is.

Billy Eichner was fun here, in all fairness.

But even if you take the politics out of this episode, it’s just…ugh. There are still a few things to like about the show (I’m particularly digging Billie Lourdes’ adult-Wednesday-Addams vibe, an incongruent mesh of sexuality and a brazenly compassionless attitude that just works for some reason), but this shit is just thin. The world doesn’t have to be fully fleshed-out at this point – we are only in the second episode, after all – but it should at least intrigue me. I should want to know more. But I don’t, because I’ve seen all these beats hit before. The concept of Something Being Amiss in Suburbia is a well-worn trope in the world of horror (see: Blue Velvet, The Suburbs, Halloween, another dozen examples that popped into your head when I mentioned this premise), and Cult doesn’t seem to be giving much thought to doing anything new with it. There are creepy neighbours (Leslie Grossman and Billy Eichner, both of whom seem to be having the inside-joke kind of fun where it’s hard for anyone on the outside like, say, the audience, to get on board), sudden power outages, someone unwanted in the house, a kid with night terrors, some dangling cow corpses, and an overriding sense of “Maybe the real monsters were in us all along”. It’s boring. It’s uninspired. I don’t care.

Do you remember when he got to play really interesting critiques of white, straight masculinity like Tate Langdon? Me neither.

I wrote last week, of the movie IT (which is bloody excellent and I’m already planning to go see it again and hey, while we’re on the subject of Stephen King, why not check out my excellent and very good Carrie recaps?), that there’s something interesting to be explored in the notion of irrational versus rational fear. AHS is groping for that here, but it seems unwilling to do the work to fit the pieces together, to create something that allows the sporadically effective scenes (like the tense one between Sarah Paulson and Cheyenne Jackson, as he confronts her about her increasing instability) and uniformly strong performances to shine. As ever, American Horror Story is so close, and yet so, so far. And we’ve still got a dozen episodes to go. Ugh.

As ever, if you enjoyed this recap and want to see more stuff like it, please consider supporting me on Patreon!