Doctor Who: Throwaway Aside- Really Delightful Introduction to Sidekick

So, here we are: season ten of Doctor Who has finally hit our screens, and it’s time for me to pick up the solemn blogging mantle once again.

On a side note, I loved everything Pearl Mackie wore this episode, especially this hat.

I was re-reading my reviews of last season because  I couldn’t face the task of rewatching it. The season opener, The Magician’s Apprentice, I was actually pretty optimistic about. After what I then-thought had been a series-low point with season eight, this seemed to be an uptick. Yes, it had plenty of problems, but the thrust of it was still decent, right? In retrospect, that episode is more an introduction to the bad parts of season nine than anything else; overdramatic writing, pointlessly circular plotting, that fucking guitar. What felt like nit-picking at the time I was writing that review in retrospect just looks like the acknowledgement of the budding seeds of terrible that would come about over the course of the rest of the season. So, that’s what I remembered when I sat down to watch The Pilot last night. The broad strokes are important, but I shouldn’t overlook the little flaws out of giddy excitement that Doctor Who is finally back. Fool me once, shame on you; fool me twice, and you probably just got me to sit through The Girl Who Died again. Perish the thought.

And, you know what, much as I sat there knowing that season nine had been a major dissapointment, ears pricked for the same problems rearing their heads again, I actually quite enjoyed The Pilot. 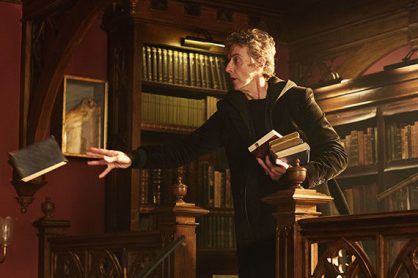 They chose to do this shot in slow-motion and it didn’t really work.

It did what it had to do in terms of introducing a new assistant – the actual plot to the episode was so slight one of Capaldi’s eyebrows could have blown it away with a particularly aggressive arch. Really, the set-up here was the most interesting part, with Capaldi taking up a job as a university lecturer with the Tardis nestled in the corner of his office and Matt Lucas kicking around for reasons as yet unclear to me. He takes Bill, who works in the university cafe, on as a student after she starts turning up to his physics lectures, but soon Bill finds herself pursued by some alien space murder water that’s taken the form of her newest crush. The monster might as well be a tennis ball on a stick for all it actually matters and I doubt I’ll remember much about the real story of this outing, because this episode is about Bill. 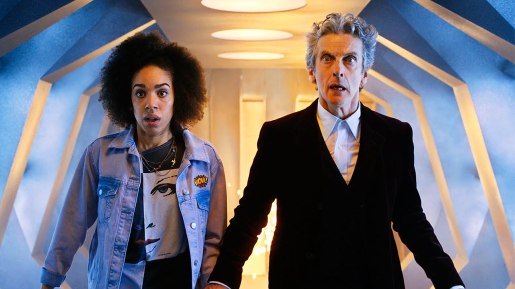 And shit, I loved her. Maybe it’s just because of the pious blandetry of the Saint Clara arc, but Bill brought an energy to the show that I haven’t seen in a while. Mackie gels so much better with Capaldi’s Doctor than Clara ever did (she always felt more like Matt Smith’s leftovers than anything else), and in between the warm and witty comedic chemistry, The Pilot even manages to tease out some genuine pathos between the two. Bill is clearly a lonely woman, and I think that her loneliness could gel with the Doctor’s in an interesting way, especially without the roadblock of inevitable romantic attachment that comes with most companions. I can’t tell whether or not Bill is just another one of Moffat’s women – she has got absent parents, made a head-scratchingly cruel fat joke, as well as insulting the intelligence of attractive women – dressed up much more appealingly by Pearl Mackie’s performance, but hey, I’m in to find out. Bloody hell, it’s just great at this point that Bill isn’t some universe-altering being (The Impossible Girl, The Girl Who Waited, etc) and comes across as a pretty normal human lady.

On a quick aside, considering that I wrote quite a bit about sexuality on this blog, it would seem weird if I didn’t address the obvious: Bill’s gay. Pretty damn gay. I’ve had my issues with Moffat’s handling of queer women before, including the way he’s dealt with it in this show, but the introduction of Bill’s sexuality was handled with moderate grace. While I could have done without the series shooting straight for a dead lesbians plot, I thought it was treated as completely normal and unremarkable, which can only be a good thing. Also, any viewers who are of the opinion that a character shouldn’t mention their sexuality on TV: do you have the same reaction every time Watson blusters about not being gay on Sherlock?

Capaldi, too, seems brighter in this episode. Maybe it’s just being cut loose from the Saint Clara plot that has done it, but he bounced around the script with just the right amount of comic timing and charm. As I have said all the way throughout Capaldi’s run, the problem has never, ever been with his performance but rather what surrounds it. I think The Pilot was one of the better examples of the show getting him right, moving away from the “callous bastard” edge they’d seemed intent on imbuing him with last season and focusing in o the idiosyncratic quirks he brings to the performance.

So, broadly? Yes, this was a good episode and a great introduction for Bill Potts. But it wouldn’t be a Moffat-penned episode of DW without some nits to pick at. 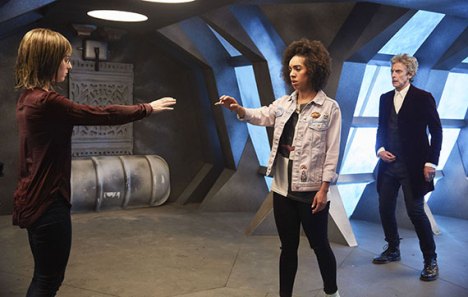 Bill and her supposed-crush, Heather, had literally nil chemistry and the show didn’t seem to know how to make it happen – they just sort of looked at each other in a club while Joy Division was playing, and then Bill followed her around a bit, which made what should have been a strong emotional climax for the episode kind of wishy-washy. As I mentioned above, the joke Bill cracks about getting her previous crush fat on chips felt jarringly mean-spirited compared to the rest of her introduction, as did her disparaging the intelligence of models.

Matt Lucas is still around, and Nardole is starting to seriously annoy me; I’ve never been a big fan of Lucas’ but I was able to grit my teeth and get through it when I just thought he was going to be in the Christmas specials but it looks like he’s here to stay. The episode re-used a shot from The Doctor’s Wife that was distractingly obvious, and I had to hear THAT FUCKING GUITAR again. The episode also skipped through the first few months of the Doctor and Bill getting to know each other, which felt like a missed opportunity, especially when other parts of the episode just sort of strolled about a bit through space and time for the hell of it. No shade to the episode, but when Capaldi was doing his big university lecture and explaining the concept of time and relative dimensions in space, I was picturing some student desperately trying to take notes and hissing frazzeldly “will this be on the exam?”.

So make no mistake – this is a flawed episode, flawed with a lot of the problems that have plagued Moffat’s run since he picked up the mantle all those  years ago. But, with his last season finally upon us, I’m willing to plow through and focus on the good for the time being. I’m not giving the show a pass for those flaws, but at this moment, the good outweighs the bad, and that’s enough for me – Bill is excellent, Capaldi seems at ease in the role, and the show had a sense of fun that it has been lacking for a while. Especially with the tantalising prospect of John Simm’s Master returning to the season.

But did we really have to have the acronym “Tardis” explained to us three times in this episode? I’ll have you yet, Moffat.

If you like my work, please consider supporting me on Patreon!