Feminism in Time and Space, Part Two: Sexuality and Representation

I swear to God I am rubbing my hands together right now, because this is a topic I’ve wanted to get to for a long, long time: Steven Moffat’s dealings with LGBTQ representation on Doctor Who. Now, I’ve written loads before about bisexual representation (or lack of it) on TV, and it’s something I always look out for in new shows, because bisexual characters-that is, characters who identify as bisexual and aren’t reduced down to their sluttiness, greediness, or, um, lying-ness-are pretty thin on the ground. But Steven Moffat has plenty of characters that don’t fit on either end of the binary, so let’s take a look, shall we?

While this is going to be about Doctor Who for the most part, I’d like to touch on a couple of his other shows that are relevant to this discussion. The first is Coupling, a so-so sitcom following a fictionalised version of Steven Moffat meeting a fictionalised version of his wife. They have a recurring group of friends, one of whom not-Steven is dating at the start of the series- when he tries to break up with her, she tells him she’s bisexual to titillate him into staying. Her “bisexuality” is played for laughs throughout the series, and then, in the final episode, someone shows her some naked ladies, she’s utterly horrified, and her ruse is shattered. 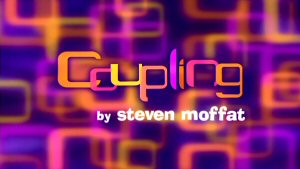 No relevant pictures for that paragraph, but just LOOK at how early-noughties this title card is.

And then, of course, there’s A Scandal in Belgravia, the Sherlock adaptation of the superb Conan Doyle story A Scandal in Bohemia. In the original tale, Irene Adler becomes the only person to outsmart Sherlock and gets away scott-free. In this version, she’s a dominatrix who spends a good chunk of her screentime naked, and she identifies as a lesbian. Despite that, however- despite the fact she says she’s only attracted to women- Sherlock is just so sexy and charming and clever that she falls in love with him and gives the whole game away. How they managed to write a story more regressive than one penned over a hundred years ago is beyond me, but there it is. Not to mention the hi-larious running joke of people assuming Sherlock and Watson are a couple, which Watson must quickly and vehemently deny lest those strangers think he likes men, rue the day.

So, you know, the problems I’m talking about here are not limited to Doctor Who. Far from it. But let’s get into the nitty-gritty of representation in the series.

Firstly, Steven Moffat has confirmed that both the Doctor and River Song are “happily bi”, which is cool, and I’m pleased to hear someone actually use the term for once (even if he did follow that up by saying that bisexuals didn’t need representation because they were having “FAR TOO MUCH FUN” and were to “BUSY!!” to watch TV, but let’s skim by that for now). But the fact is that, watching the show, the references he points to as proving their bisexuality- such as an offhand comment from River about fancying everyone in the crew except one, and her making reference to kissing Cleopatra- are always kind of…brushed over? Sure, the Doctor kisses men once or twice during the series, but it’s never as much more than a joke. Neither River nor the Doctor actually find themselves seriously attracted to a person of the same sex without it being breezed past with a barely-audible “No homo though” every time it comes up. Steven Moffat had to confirm their sexuality outside the show, which proves that what he’s doing inside the show is, at the very most, leaving people confused (but I’m sure they’ll make their mind up when they just meet the right episode and settle down, huh?).

And let’s talk about Clara, who has, on a couple of occasions made reference to being attracted to women. The first time, she’s Oswyn, and comments on her crush on a girl, only to quickly dismiss it as a phase; earlier this season, she spoke about Jane Austen being a “fantastic kisser” (right, sure, give Shakespeare his own episode but relegate Austen down to off-screen kissy-kissy faces). Some people have deduced from this that Clara bisexual, and they’re welcome to this interpretation, but to me it feels like a gross kind of pandering- sure, we’ll mention these things, but we’ll never talk about them again, see how the impacted Clara, let alone actually get an episode dedicated to them. Amy flirts with another version of herself, but it’s mostly shown to be a massive turn-on for her male partner Rory. Again, it’s there, but it feels more like a punchline that an actual attempt at representation.

To be fair, I’m bisexual and I’m SUPER into myself so maybe this is accurate.

I’d be doing a disservice if I didn’t make mention of Madame Vastra and Jenny, an openly lesbian couple who join the Doctor on some of his adventures. Broadly, this is obviously good news, as having a long-term loving gay relationship on a show like Doctor Who is excellent for representation. But then again, let’s not forget that the show paints them as generally bickering, with Vastra’s straying eye and Jenny’s still-servant status. And, of course, the fact that the show had Jenny forcibly kissed by the Doctor (who knew she was both gay and in a relationship) before she shared an on-screen smooch with her partner. So, sexual assault comes before lesbian kisses. Good to know where the hierarchy is. 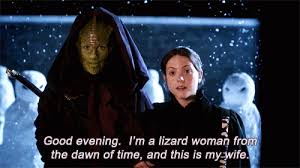 Look, in some ways, I really appreciate that the show is trying to depict non-binary sexuality, and I think they have succeeded before. Even though Captain Jack Harkness (who appeared for the first time in a Moffat episode, but was created by Russel T Davies) kind of fits the hyper-slutty mould for bisexual characters on TV, he’s probably one of my favourite non-binary characters ever because he’s funny and brave and a bit of a sleaze (I worship at his altar in this review of Torchwood, if anyone cares). But since then, the show has treated non-binary characters like a novelty, who’s straightness is the only aspect of their sexuality worth exploring or even seriously discussing. And, considering we’ve got the whole of time and space to explore, I’d happily chop in another Dalek episode for one that actually took a look at the wide range of sexualities Moffat promises us are on his show.