So, last year (HOW IS IT 2016 ALREADY JESUS), I wrote an article talking about the treatment of women in the sitcom The Big Bang Theory. And, for some reason, that’s the article that people talk to me about most- I guess because the show’s so popular, and people are keen to defend their weekly dose of warm, fuzzy sitcom goodness. And one of the things I hear quite a bit is that the show laughs at the guys on the basis of their gender as much as it laughs at the women, ergo it can’t be as bad as all that. Well, since you mention it…

The Big Bang Theory, as you probably know, revolves around a group of four scientists who spend most of their free time engaging in geeky pursuits- attending comic-cons, playing board games, reading comics. They’re not especially successful with the ladies, they’re not particularly physically  fit, they’re often emotional and needy. Basically, they don’t fit the dictionary definition of masculinity- and the show openly mocks them for it.

I remember when The Big Bang Theory first became really popular- when the stars were on the front covers of magazines that declared smart the new sexy. And it always took me by surprise, because the show seems to show open disdain for the geeks at it’s core, specifically for their geekiness; their inability to fulfil traditionally masculine traits is often the source of much of the humour on the show. Take the episode The Fish Guts Displacement (which this article explores in greater depth) , where Howard has to be taught how to fish in order to spend time with his father-in-law; Howard (and the rest of the group by extension) is shown to be incapable, squeamish, and a little bit pathetic, contrasting with the depiction of his father-in-law- the strong, stoic, silent type who apparently represents the epitome of masculinity, at least in contrast to Howard and his friends. The show openly draws a line between the “real” men of the show and the leading foursome, and takes much of it’s humour from their inability to live up to those standards of masculinity. 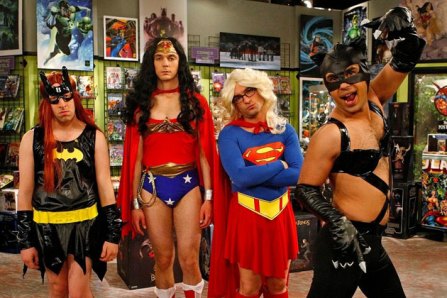 And speaking of standards of masculinity, there’s a lot to be said for how much the show hinges the normality of these characters on their sex lives. Up until very recently, breakout character Sheldon Cooper showed no interest in any kind of sexual activity with his girlfriend Amy, leading her to trick him into a variety of intimate situations with her (which, ugh). His lack of sexual desire is framed as something hilariously freakish, because what kind of guy doesn’t want to fuck his girlfriend at any given opportunity, right? By extension, the rest of the male characters are similarly portrayed as less than masculine by the show due to their lack of success with women- Raj’s chronic anxiety, Howard’s horrendous creeping, and Leonard’s bumbling insecurity have all been played for laughs, especially when contrasted with the apparently more masculine traits of their eventual partners (like having had more sex partners, more confidence with the opposite sex, etc). The show regularly casts aspersions on their sexuality, a gag so apparently brilliant that it became a running joke because HAHA GAYS, I guess. 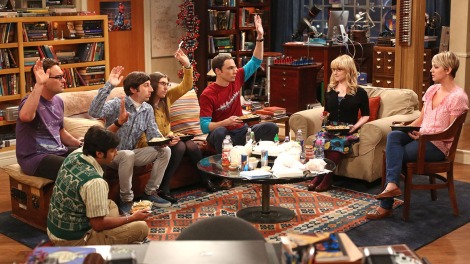 It’s interesting to note that Stuart, a side character who owns a comic book shop frequented by the leading men, was originally introduced as intelligent, charming, and successful, despite-or, indeed, because of- his involvement with geeky culture. Within a few appearances, he had been reduced down to a caricature of a lonely guy whose staggering incompetence with women is a big part of his comic value.

The Big Bang Theory, basically, is a show which draws it’s humour from the subversion of traditional gender roles. Which could be a great idea, if they didn’t frame the men who subvert these roles as often creepy, socially incompetent, and childlike (remember, Howard still lives with his mother for most of the series’ run, and all four characters are shown to have often dependent relationships on their mothers). The show is taking steps in the right direction by revolving around men who don’t live up to the traditional standards of masculinity, but it could be doing even more by not laughing at them for it.