Look, let’s get one thing straight: I think Sense8 is a great show. But I’d be doing you a disservice, as a noted cultural critic, by not mentioning Freema Aygeman in it.

Ugh. You might remember Aygeman as Martha Jones from series three of Doctor Who, where she displayed a similairly staggering lack of acting talent. I know some things are down to taste, and some people prefer different acting styles and what have you, but I defy anyone to look me in the eye and tell me this woman can act. She’s an infuriating black hole of talent, a gaping maw of awfulness that threatens to engulf the entire show in it’s wake. She’s stilted, her accent is hilarious, her character impossible to buy into, her chemistry with the cast almost non-existent. It’s genuinely difficult to look at the screen when she’s on it, because she’s that astoundingly, unwatchably terrible. And I can’t pretend that she’s not part of the show. So, fair warning: don’t think I’m giving her a free pass just because she lucked on to Netflix’s most interesting show to date.

Sense8 is directed by the Wachowskis, and this might have been the release that finally put them back in my good books. Yes, I know everyone else in the world can apparently find something to like in The Matrix, but I can’t- it’s humourless, stupid, pretentious, atrociously acted, and badly written, and I hate it. But, then I stumbled on the Wachowskis fun, tongue-in-cheek live action adaptation of beloved anime Speed Racer, and I decided I might have more in common with them than I first realized. When Cloud Atlas came out a few years back, I was blown away by the sheer scale and ambition of what they were trying to do and hey, I know Jupiter Ascending looks like godawful B-movie crap, but that’s my cinematic succor and I know I’m going to love it.

Sense8 is probably most like Cloud Atlas, in terms of the fact that it tells multiple seemingly disconnected stories, barelling towards a conclusion that brings them all together. That, and it stars Doona Bae. Okay, so let’s try and figure out how to explain this. Eight people make up the main cast- Capheus, an optimistic Kenyan bus driver trying to earn enough money to keep his AIDS-ridden mother alive, Sun-Bak, the Korean daughter of a buisnessman who moonlights as an underground kickboxing champ, Nomi, a transgender gay hacker (who is, tragically, dating Freema Aygeman), Kala, a pharmacist in Mumbai destined to marry a man she doesn’t really love, Wolfgang, a troubled German gangster pulling off a dangerous heist, Riley, an Icelandic musician with a nightmarish history, Lito, a closeted Mexican telenovela actor whose lifestyle is threatened by his co-star, and Will, an American police officer. Is that all of them? I think that’s all of them. These eight people find they can dip in and out of each other’s lives at will, forming strong connections with the people in their group and often aiding each other in times of trouble. But a mysterious organisation is on their tail, and they have to work together to overcome it. There are so many dots to connect between the stories that the show will be rewarding you weeks after you watched the first episode, as you suddenly click another theme into place or spot another parallel between story arcs.

Doona Bae as Sun-Bak and Aml Ameen as Capheus

I think what I find interesting about the series- well, one of the many things- is how it seems more interested in the individual trajectories of each of these characters than a big, overarching plot. It may or may not be to your tastes, but fashioning eight very different storylines, with eight different casts of secondary characters and eight locations, is pretty ambitious. Every single plotline is afforded to the same attention to detail, and what comes out of that endeavour is a show with eight perfectly defined leading characters who generally operate almost completely apart from the rest of the cast. Sense8 is audacious proof that diversity makes for fascinating TV-whether it’s diversity of race, gender identity, or sexuality, with a range of locations and lifestyles represented with care and intelligence Every character is fully formed, so when they cross over with their counterparts across the world, the profound meetings they share serve to strengthen their charectirisation instead of hurriedly filling in the gaps. Their cross-cultural meetings with the other members of the group prove some of the finest television work I’ve seen in yonks, particularly an emotionally gruelling but ultimately rewarding look at grief, heartbreak, and growth in episode ten.

Yes, these are big themes, but with a show that has as big a scope as this, they come across as all-encompassing instead of just broad. Plus, Sense8 regularly takes sly shots at itself, allowing it to get away with some of the more melodramatic elements. Like all good sweeping sci-fi drama, it’s got something to say about the human condition, and the Wachowskis have never been shy about putting their themes front and centre. And oh, you want action? The Wachowskis got it, whether it’s in the form of gunfights, car chases, or Doona Bae laying the smackdown on some unfortunate souls. 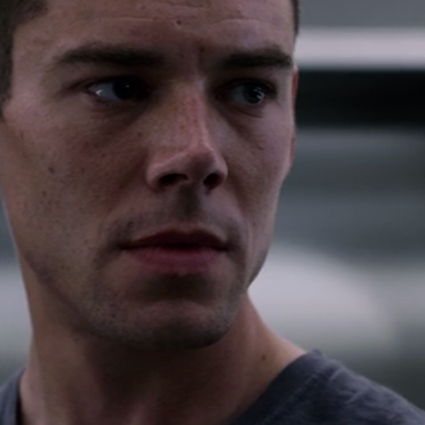 Brian J Smith as Will. Again: PRETTY SO PRETTY

It’s practically impossible to pick a favourite, because they’re all dazzling at some point or another during the series, but my heart likes with Doona Bae, and the clever undermining of the “subservient Asian woman” stereotype with her swaggering, street-fighting persona. But she’s not just a trope-y emotionally weak/physically strong female character- like the rest of the cast, her past strife is highlighted and explored to give us a better idea of who she is today.

And that attention to detail lifts all the other characters out of stereotype, too. I expected to be bored by the seen-it-before troubled young cop with daddy issues, but Will turned out to be a sympathetic, utterly charming character (thanks in no small part to Brian J Smith’s affecting performance). Riley Blue seems like a generic indie yoof chick, but as her background is filled in the show manages to wring out genuine pathos from her would-be cliche elements. I could go through each and every one of the characters, and explain in detail why they’re so good, but that would be pointless, because having these characters explained to you undercuts so much of what the show is about. Sure, it’s ostensibly revolving around some long-running plot involving Daryl Hannah and Naveen Andrews (from Lost!), but the lavish cinematography and studied character work prove this series, at least, to be about introducing the audience to a fascinating cast. Watch it. Watch it now. I’ll wait.

2 Comments to “Sense8 is Bloody Excellent”