It’s time, you bunch of masochists, to jump back in to the twisted world of Fifty Shades of Grey. After the last couple of weeks’ horrifying dallies into non-consent as romance, I’m pleased to tell you that things take a turn for the better in Chapter Twenty. And by better I mean worse. And by worse I mean that you’ll need a bottle of wine and a loved one nearby.

I’m not saying you should think of me as a teenage serial killer, more as someone who is at least as attractive as Evan Peters.

Christian carries Ana into the boathouse, and, after spending a paragraph describing her surroundings down to the “nautical New England theme” (seriously), she thinks that she doesn’t have time to examine the boathouse because of the look Christian is giving her. He’s blazing with anger, lust, etc, etc, you’ve read this before, and Ana gets the first line of dialogue of the chapter:

Quick heads up for everyone everywhere: if your romantic partner has to plead with you not to hit them, you’re an abuser. Ana reiterates that she doesn’t want to be spanked, and then kisses Christian (honest to God, I nearly typed Edward). He pushes her off, confused, because:

“At the dinner table, with your legs.””

A feminist in the wild!

So, to be clear, Christian angry at Ana because she didn’t want to be fingered at dinner with his family. Because Ana doesn’t get bodily autonomy, whether it’s to do with her contraception or not wanting to perform a certain sex act, and Christian is justified in getting angry with her for denying him his right to her body (which is not an agreed-upon term in their relationship). But oh wait, there’s more! 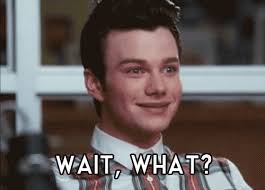 Slow down, Christian. So, you’re mad that Ana chose to spend time with a man who sexually assaulted- not seduced- her, then left her with a complete stranger? Does it not cross your mind that, what with you being that complete stranger, TAKING A DRUNK, VULNERABLE WOMAN HOME FROM A BAR ISN’T AN OKAY THING TO DO?

Ana gets super turned on by this, for some fucking reason, and they have sex; Christian tells her that if she comes he’ll spank her, even after she explicitly said two pages ago that she didn’t want to be hit. She doesn’t come, Christian’s sister bursts in, EL James uses the phrase “just-fucked” twice in a three-line paragraph, etc.

Christian and Ana go to say goodbye to everyone, and Ana admonishes Kate for winding up Christian; she replies that she’s just trying to show Ana how bad he can get. Yes, winding a clearly violently angry man up to see what he’ll do; a truly fucking innovative version of domestic abuse intervention.

They leave and get in the car, where they talk about her trip to Georgia some more. Christian asks to come with her, and she replies “I was hoping for a break from al this…intensity to try and think this through”, so, make plain note, she wants time away from Christian to think about their relationship. That is a thing that is said right here.

Christian asks Ana why she needs time to think, and she considers the fact that she thinks she’s in love with Christian, whearas he sees her as a toy to be “beaten” when she does something wrong. BECAUSE THIS IS HOW YOU SHOULD FEEL ABOUT YOUR PARTNER.

Ana says that she wants to make love to Christian, and he gets huffy and tells her to get ready for bed. But, because EL James can’t have these fuckers solve their problems with anything but a distractictingly awful sex scene, they fuck anyway. He tells her he’s going to spank her, but for their pleasure, not for punishment, which makes the fact that she doesn’t like being hit irrelevant, really. Seriously, did EL James leave years in between writing each chapter and forget what the fuck her stupid screw-dolls said in the last twenty pages? URGH.

He sticks Ban Wa balls up her poon, spanks her, and then fucks her (again, for less than half a page)

Within eight lines, Ana has brought the conversation back to his dislike of being touched, and he ends the chapter on this soothing refrain:

“The woman who bought me into this world was a crack whore, Ana.”

Just…wow, EL James. I bow before a master of the craft.