First off, I just want to follow up on last week’s recap. I declared myself a lifelong die-hard stan for Hagrid, and now I have the proof – my mother (shout out to the big M) dug up some photographs of me as a kid proving my devotion to the big man (hover for captions): 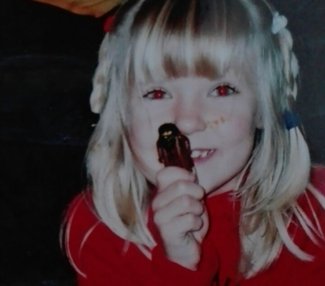 Tiny Lou with a special plus-sized Hagrid Lego figure. I had a crush on this Lego figure, and I have no problem admitting to that. Yes, that’s food smeared on my face, as it always was/is.

The cuddly Hagrid toy that I fucking TREASURED as a kid, who used to sit at the end of my bed to look after me every night.

Never let it be said that I don’t back up my passionate fandom. Anyhow, we’re on to chapter five, and Harry is convinced that his encounter with Hagrid was nothing more than a dream – until he wakes up in under Hagrid’s coat, to an owl tapping at the window with a letter. Hagrid tells him to pay the owl, which Harry does, and then tells him they’ve got lots of get on with that day, including getting to the bank:

“Just the one. Gringotts. Run by Goblins.”

I choose this excerpt so I can share with you some of the accusations of the depiction of goblin bankers as anti-semitic (now THERE’S  sentence). Honestly, I have mixed feelings about this – and to be perfectly clear, I’m not Jewish, so I actually have no say at all in this, but I do have some thoughts.  Like so many instances in this series, Rowling invokes unfortunate stereotypes of certain types of people, but for the most part, I think these stereotypes are baked into the fantasy genre in general and not specifically of her own creation. Not giving her a pass, of course, because there were plenty of ways to write these characters that doesn’t come off as hopeless stereotyping, but what I’m saying is that I don’t think these depictions are exclusive or even original to her. On with the chapter!

I do love this chapter in a big way because it’s our real introduction to the nuts and bolt of the magical world – I still remember reading this for the first time and just being enthralled by the world-building, and I always point to this series as the first moment I really fell in love with the notion of a huge, sprawling, fictional universe, though I would be more drawn to science-fiction than fantasy as I got older. Hagrid explains Gringotts, the Ministry of Magic, and the desicion made by the wizarding world to divide themselves from the muggle world (fuck, “muggle” as a word just makes my hair stand on end. I’ve heard it used too many times in earnestness from people who clearly closed the final Harry Potter book and went “welp, that’s the last interaction I need to have with any new kind of pop culture”).

Hagrid takes Harry to the station, where he continues to be my stone-cold favorite character in the series:

“Not only was Hagrid twice as tall as anyone else, he kept pointing at perfectly ordinary things like parking meters and saying things like “see that, Harry? Things these Muggles dream up, eh?”

How can you not just love Hagrid? He’s so goddamn fucking sweet. Hagrid and Harry get on the train to London, and Harry looks over his list of equipment for his first year at Hogwarts – this is the first appearance of Fantastic Beasts and Where to Find Them, by Newt Scamander, and my eye just started to twitch remembering that Eddie Redmayne got the Oscar for his mediocre performance in Theory of Everything over Michael Keaton in Birdman and we’re just going to move on swiftly. Who the fuck could ever have guessed, though, that Harry Potter would become such a cultural behemoth that this one throwaway funny book title would turn into a fucking movie franchise? Personally, I’m looking forward to them really scraping the bottom of the barrel content and launching their webisodes about the backstory of One Thousand Magical Herbs and Fungi by Emeric Switch.

Hagrid takes Harry through London until they arrive at The Leaky Cauldron, the secret entrance to Diagon Alley that only wizards can see. When they enter, Harry is recognized at once, the whole bar grinding to a halt as they realize who he is. Which happens to me all the time, as the famous blôggér that I am. Professor Quirrel makes his first appearance here, clearly fucking terrified at being in Harry’s presence and indeed anyone’s at all.

Hagrid takes Harry to Diagon Alley, where they head to the bank to pick up his cash – Hagrid also makes reference to the Philosopher’s Stone, or what we’ll soon know to be it, and indicates that Dumbledore has sent him to pick it up. They travel to the depths of Gringotts to pick up Harry’s fortune, and Hagrid also picks up the mysterious package for Dumbledore, all while trying not to vomit while on the fast-moving trolley that takes them into the vaults of the bank.

Hagrid slips off for a pint (but really, he actually does, which is a big mood) and Harry goes to get his robes. And we get the first appearance of another major character in the series, as Draco Malfoy (everyone’s first “huh, I guess the bad guys can be hot?” moment, don’t lie) is also getting fitted for robes. They talk a little about Hogwarts, and Malfoy asks if Harry’s parents were both magical:

“I really don’t think they should let the other sort in, do you? They’ve just not been brought up the same.”

Criticize Harry Potter all you want (and I will) but I’ve always loved the complex running themes about class and lineage in the series – Rowling writes in a really strong throughline across all the books about those seen as “less than” by the people around them (Hermione as a Muggle-born witch, Lupin as a werewolf, Hagrid as half-giant, for example) and how that impacts their interactions with the world around them.

Harry finishes up his fitting, and Hagrid appears with ice cream for him (#BaeOfGiants2k18), where Harry asks about the Hogwarts houses that Malfoy mentioned to him:

“Better Hufflepuff than Slytherin,” said Hagrid darkly. “There’s not a single witch or wizard who went bad who wasn’t in Slytherin.”

Yes, I took the Pottermore test and, yes, I am a Slytherin, and no, I think it matters at all to this point I’m about to make: what the fuck is the deal with having a house where you just stow all the potentially evil fuckers? I know this is far from the first time somebody’s pointed this out, but damn, it’s so funny to have this juxtaposed with “don’t discriminate against people for what they can’t help, also, fuck Slytherin, those bunch of sly evil bastards”.

Hagrid gets Harry an owl as a birthday present (#BaeOfGiants2K18, except I’m yelling it now) and they go to Ollivanders to get his wand. Mr Ollivander (played to utter perfection by John Hurt in the movies) is described as having eyes like moons, and I have to admit every time I see someone described in any way describing the lunar cycle, I have flashbacks to Anita Blake “glowing like she swallowed the moon”. Oof, bad memories.

Ollivander talks about Harry’s parents, and mentions that his father’s wand was useful for transfiguration, which is a nice nod to his animagus past that we’ll get to in later books. Harry’s wand turns out to be one with a phoenix feather inside it, a feather plucked from the same bird as the one used to make Voldemort’s wand. Which doesn’t seem very vegan of them, but it is a cool plot point to throw in here – Voldemort and Harry are intrisically connected, switched sides of the same coin, and their parallels (and their seperation – culminating in the moment Harry embraces his mortality where Voldemort has only been able to hide fro it) make up some of the more compelling character work Rowling does across the series.

Hagrid takes Harry for a birthday burger (I’m not going to say it again, but you know what I’m screeching right now), and Harry admits that he’s fearful of the fact that he already seems to have such a reputation in the wizarding world:

“How can they expect great things? I’m famous and I don’t even know what I’m famous for.”

I for sure read this line in Daniel Radcliffe’s squeaky pre-pubescent voice, for the record. Hagrid assures Harry that he’s going to be fine at Hogwarts, before putting him on a train back to the Dursleys before his final move to Hogwarts. And that’s the last we’ll see of Hagrid for a while, so I’m just going to soak in my final moments with my Giant of Choice in peace.

And that’s us for this week! If you enjoyed this recap and want to see more stuff like it, please consider supporting me on Patreon! You can also find more of my writing on my film site, No But Listen.