Ugh. I’m going to be honest with you: I don’t want to write this recap. After last week’s rapetacular mess, I was feeling pretty cool towards Vikings in general – and this week’s outing, Full Moon, didn’t exactly do much to welcome me back into the fold.

Everyone’s bloody horny in this episode, and it doesn’t serve the episode well. As someone who writes erotica for a living (side note: support young local Vikings recapper, buy my books), I don’t find sex for the sake of sex all that interesting (in fiction, at least), and a lot of this week seems to revolve around boning of some description: whether it’s an inexplicable sex scene between Bjorn and Some Lady tossed in for no other reason than, uh, titties, I guess, to Ubbe and the interminably awful Margerette grinding joylessly away under a giant nightie, to Ivar and Heahmund having an Extremely Platonic and Heterosexual Late-Night Conversation Involving a Not Very Phallic Knife at All, no-one can keep it in their pants this week and as a result the episode feels like a big fat pile of sexy nothing. The one good scene of the episode was between Lagertha and Bjorn (thanks to an uncharacteristically great performance from a charming and confident Alexander Ludwig), and I was honestly half-expecting the show to forget that they were related and have them get it on.

I don’t have a problem with sex scenes per se, but most of the time I see them used in a way that just…look, I think we can all agree that if we’re grown-up enough to be watching a show like Vikings, we’re grown-up enough to know what sex is and what it looks like, so watching Bjorn and his new lady grind on each other is just…why? There was no immediately relevant plot purpose for it, and in short, it felt like a chance for the show to shove some more tits in your face (because everyone watching a show with this much violence in it is a straight man, right?) and show how grown-up and adult it was in the process. You know that kid in your high school who was always coming up with these crazy sex stories that were obviously made up because they were truly a virgin and didn’t want anyone to know? Yeah, that’s what all the sexy stuff here felt like. Inorganic. Forced. Slightly embarrassing for all involved. 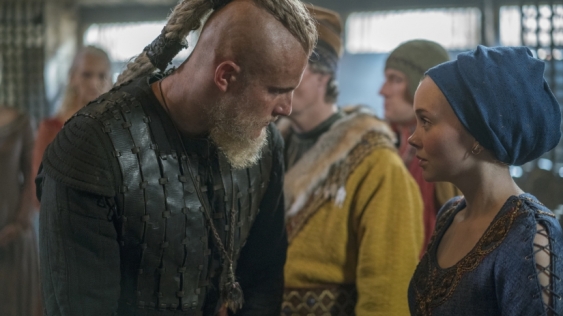 Full Moon was, after all, an episode that was one-hundred-percent set up. It was as though Vikings hoped to dangle sex in front of some of it’s stupider viewers in the hopes of keeping them interested as the rest of the plot hangs around waiting for something to happen. With Bjorn, Hvitserk and Heahmund over at Halfdan’s place waiting to launch their attack against Kattegat and the rest of the cast kicking around OG-town and waiting for the attack to come, there was a lot of strategising thinly framed as actual interesting plot. I feel like most of the stuff they were blathering on about in the crushingly obvious chess-metaphors scenes could have just been introduced in a few brief exchanges in the heat of battle – yeah, there’s no doubt Lagertha would plan against Ivar’s attack, but would she really hang about revealing her game-plan to a bunch of people who she’s not yet sure she can trust (such as Ubbe and Halfdan)? Lagertha is an interesting character on paper and Katheryn Winnick is doing her darndest with her (with varying results), but she’s so utterly functional as to barely exist past the plot points she’s spouting this week. 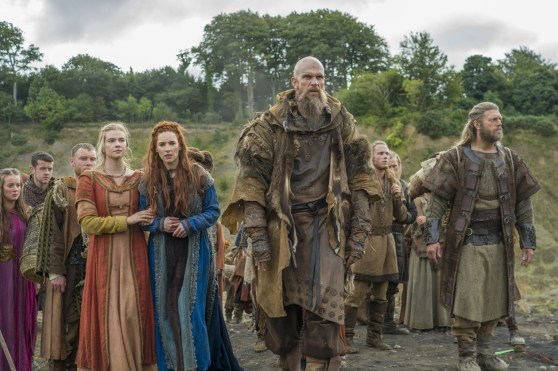 Things over in Ivar-country are slightly better but also staggeringly obvious and badly-articulated, as JRM and Alex Hogh overact at each other to the extent that I’m pretty sure this is some bet between them over who can get in the most ridiculous line reading of the week. Tragically, King Harald continues to be in the show, and it struck me with a fair force watching this episode that if they just wrote him out of the show and never once addressed it, I would probably be happier with his plot than I am now.. Astrid’s gang-rape gets no addressing this week, so I think we’re safe to chalk that up to yet another garbage-pile depiction of sexual assault. I really want to take on this plot with a bit more vigour, but I’m giving them a little more time to address it before I go in too hard on it, but suffice to say as it stands now I am so angry and disappointing that one of the only major shows I’d ever seen that didn’t fall back on using a rape storyline against one of it’s leading female characters has gone there makes me want to fucking scream for personal reasons that frankly this episode wasn’t good enough to warrant me going into.

This wasn’t from this week’s episode, but this is here so I can tell you I ship it

There was Moe Noneford this week, as Judith and Aethelwulf didn’t get even a jot of screentime, but Alfred did finish his jaunt to Lindisfarne: it was actually one of the better parts of the episode but I did yell with annoyance when Alfred wandered back on screen, so that should tell you all you need to know about how much I like the actor playing him. There was some good stuff here – Alfred’s confronting of the monks about their elitism being an episode highlight – and some gorgeous direction (standard, at this point), but the show feels like it’s wheezing through this plot with no real endpoint in mind, giving it a saggy second-act feel that drags the whole thing down.

And I think that’s the biggest problem this week: the show doesn’t seem keen to move on with it’s storylines in any meaningful way, and it shows. We’re firmly done with the brisk first act of this season (which ran from the first episode to Ivar, Hvitserk, and Heahmund leaving York), but now we’re into the claggy middle section and everything feels like it’s wading through mud – and why? Is it because they don’t have enough decent plot to fill out this season, or perhaps the budget to bring to screen the plots they want in a convincing way? The first chunk of this season was no doubt expensive for the show and these few punishingly full filler episodes feel like a reaction to that. But I could do without enormous spectacle if we could land a few more solid character beats and small relationship moments instead: I want to look forward to these bright, shining scenes between fully-formed compelling characters, not battle sequences that start to blur together in my head after a while. Yes, next week looks mildly more interesting as Ivar prepares to attack Kattegat, but no matter how exquisitely great that might or might not be, it doesn’t make up for two weeks of dumb-ass, generic shit that left a strong start to the season feeling curiously toothless in the process.

If you enjoyed this recap and want to see more stuff like it, please consider supporting me on Patreon!