“Do you ever feel like your life turned into something you never intended?” sighs Amy Adams in Tom Ford’s sophomore feature, Nocturnal Animals. I can’t speak for her, but one can only hope that the dreck I saw last night wasn’t how the former fashion designer planned his movie to turn out. 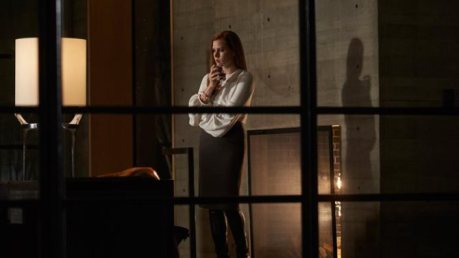 That might be a pretentious way to start out this review, but hey, at least it fits with the films agressive attempts to shove itself up is own arsehole; this is the kind of film that people who liked will sniff about critics “just not understanding” when, in fact, it’s all too easy to understand, because these are stories we have all seen a hundred times before.

Susan (Amy Adams) is a superficially successful art gallery co-ordinator with an equally attractive and successful husband (Arnie Hammer); however, when she receives a manuscript from her writer ex-husband Edward (Jake Gyllenhaal), she…well, she continues to go about her life as normal, except that now both us as the audience and she have had to sit through Edward’s sub-Cormac McCarthy pulp fiction.

Make no mistake, despite the fact this film pushes Amy Adams as it’s lead, this is strictly a film about the male ego and, fuck me, we’ve had plenty enough stories about the male ego in recent memory. Basically all Amy Adams does is sit about looking glamorously sad (even after a scene where she takes off all her make-up, her close-ups reveal enormous mascara clumps), reading her ex-husband’s novel, and being forced to grapple with Tom Ford (who also adapted this story from a book of the same name) handing her some of the worst dialogue I’ve heard in a long time. Aside from the genuinely hilarious extract I quoted at the top of this review, she sighs her way through dialogue that an actress of this calibre just doesn’t deserve. Jame Gylenhaal doesn’t get off much easier, murmuring in a thick Texas drawl that Susan has “sad eyes” and that he sees her as the true creative she can’t believe that she is. He is the epitome of the dude who wants to share his writing with you, but only as long as you look to him with starry eyes afterwards and tell him how great it is.

As the only main female character, Susan’s written with a child’s understanding of femininity; she hates her mother and wants nothing more than to distance herself from her (shame, because Laura Linney, who plays her mother in a single scene, is magic as always), she lounges around looking glamorous twenty-four-seven, she defies her family by marrying a man who’s “sensitive”. But she’s just the start of what’s wrong with Nocturnal Animals.

The bulk of the film revolves around a retelling of Edward’s soon-to-be-published first novel; first off, might I suggest that if I were an editor and someone sent me this manuscript, I would send it back with a polite note never to contact me with his weird emasculation boner fantasy, thank you so much. This story is focused on a character who represents Edward, his wife (representing Susan), and their daughter (representing a child Susan aborted after their separation), on a trip they take out to West Texas; late at night, after a tussle, Edward’s wife and daughter are abducted, raped, and murdered by a group of men led by the redneck Ray (Aaron-Taylor Johnson, in a role far less interesting and scary than the trailers made him out to be). Edward’s surrogate pursues his family’s killers with the help of local detective Bobby Andes (a dry and charming Michael Shannon), ending in stupidly contrived bloodshed (and many other bodily functions, including literal shit, because that’s what Tom Ford thinks Texas is, apparently). 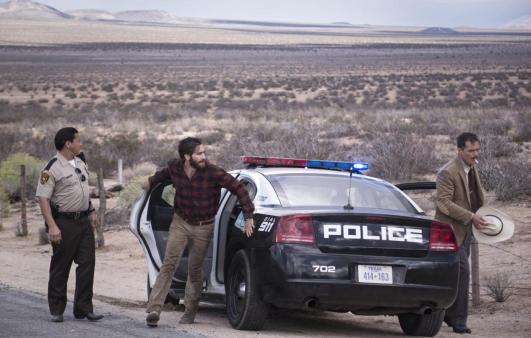 Now, fucking forgive me, but if my ex-husband who I hadn’t spoken to in years who I knew at least loathed me a little bit (in the film’s soap-opera climax, Edward appears in the rain outside the abortion clinic where Susan goes to have her termination), sent me a manuscript in which a clear surrogate for me was savagely raped and murdered, her body displayed naked and wrapped around that of our daughter, I would consider that a threat. That is some sinister fucking shit. It’s not “devastating”, it’s not “dark”, it’s fucking creepy, and it feels like uncomfortably like a thinly-veiled fuck you to someone in the author’s real life.

In terms of the storyline, I kept waiting for the film to take a left turn and do something interesting with the rape-and-revenge thriller; I suppose it did, because most films in that genre have the women conducting their own revenge instead of a curiously flat Jake Gyllenhaal stomping around and booing his eyes out on the edge of a bath doing it for them. It’s dull- the film attempts to serve us a look at the emasculation of the modern man, and misses where tremendously good predecessors (The Sopranos, Breaking Bad) have succeeded by carving out all the ugly, nasty, misogynist little crevices it can; a dream sequence showing a teenage girl being pinned down and violently raped, the fact that most of the film’s scant humour comes at the expense of the women, the lingering shot off a dead, naked teenager’s corpse from behind, the use of the naked female body as literal decoration. It’s an unpleasant watch that, in its attempts to become High Cinema (oh God, the film school 101 direction), skips out on any chance it had to be deliciously pulpy or soap-opera entertaining.

A Single Man, Ford’s first movie, is beautiful in its quietness, in its smallness; where it succeeded in creating a story with heart and motion and a point, Nocturnal Animals flails for meaning and ends up in gloomy, pretentious nothingness

One Comment to “Nocturnal Animals is Tom Ford’s Sophomore Slump”