Can we just take a second to talk about Kathy Bates? In this episode, she’s a majestic, episode- dominating force; by turns hilarious (“they gave me a three-episode arc, but iI got five!” she maniacally gurns into the camera, her apron drenched in blood) and terrifying. Despite her strong performances in the show so far (season four being her finest, for my money), I’ve always had the nagging feeling that the show has never quite given her a role that allows her to display her full, magnetic talent; finally, somehow, in this outrageous, blood-soaked forty minutes, she’s in full flight, and it’s magnificent. 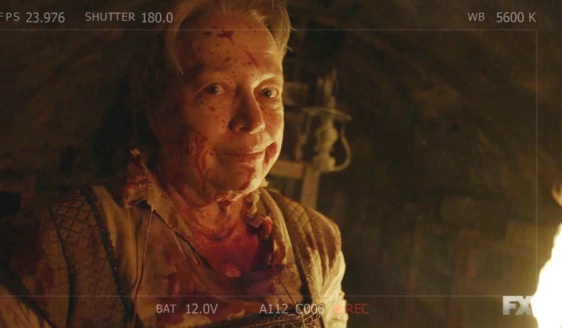 Bates-as the actress who played the Butcher in the My Roanoke Nightmare episodes, back to murder the producers and assorted stars as revenge for her overlooking- is only a small part of what made this episode great, however. God, isn’t it nice to be able to come into a review with nothing bad to get out the way before I heap this installment with praise? After a precariously wobbly six episodes, this is a glorious, messy, campy piece of fun, a throwback to the AHS of season one (albeit without any of the meaty themes, but in all honesty, not missing them).

Really, this episode was a collection of great moments as opposed to a cohesive piece of it’s own- but, just for this week, that worked beautifully. I was genuinely surprised by the turns the show took this week (most notably the killings of Cheyenne Jackson and Andre Holland, who I assumed would make it through at least a little more of the season)-and the execution was increasingly brilliant as the forty minutes unfolded. A spurned Lily Rabe beats Andre Holland to death with a crowbar; Kathy Bates hacks and slashes her way through the behind-the-scenes production staff. As Sarah Paulson (with the line of the season so far in “I’m not an American, I’m not used to all this carnage”) weeps about her love for her husband into the camera, heavy drips of gore drip on to her face- courtesy of that very same husband’s gutted body hanging above her. The underused and ever-brilliant Robin Weigert crops up as the real-life head of the cannabalistic Wolk clan, seasoning Adina Potter’s leg before sticking a fork in it to see if she’s done (and the scene offers a tiny glimpse of my one and only, Finn Wittrock, as another member of the family).  This is fabulously overboard, no-holds-barred, gleefully gory horror- and I fucking love it.

I’m sucker for the found-footage genre at the best of times, because the first horror movie I ever really loved was The Blair Witch Project (no, I haven’t seen the recent sequel, and yes, I’m desperate to get to it already), but I know that that particular side of horror can be catastrophically awful. Because it’s naturally often attracts filmmakers without the big budget to spend on high-quality production values, it also often attract filmmakers who think that some shaky-cam and shrieking makes for titillating terror. It’s seen as low-budget, which many read as low-effort instead (if you think that’s the case, I’d recommend the excellent Grave Encounters to dissuade you of your arguably stupid opinion). So, it’s good to see a show with a bit of budget, some real time, and some decent backstory and flair for the setpiece have a shot at the genre. They’re not using found footage as an excuse to be lazy, and I appreciate any attempt to rehabilitate a genre that might well have been permanently damaged by the existence of the Paranormal Activity franchise.

Honestly, there’s not much to say about the episode beyond the fact that’s really fucking fun. And, after a few seasons that have strived for deepness and failed, or shot for campy fun and failed, this episode has gone “fuck it, let’s have a laugh”- and actually succeeded. American Horror Story (and most of it’s main cast) are dead; long live American Horror Story.