So, Preacher, huh? You may or may not be acquainted with the comics (I am, but am not the hardest-corest of the hardcore fans), but it’s probably been hard to avoid talk on the AMC show, which premiered last night. 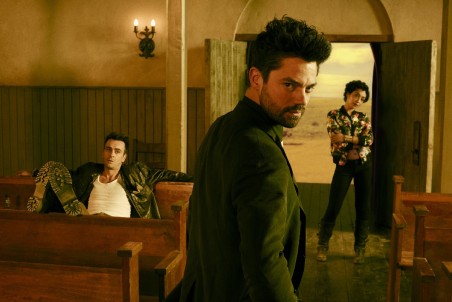 A notoriously filthy tale that revolves around Jessie Custer, a small-town reverend in the Deep South with a dark past, Cassidy, an amoral Irish vampire, and Tulip, a gun-for-hire and Jessie’s ex-lover, it piles on the Christian iconography only to subvert it with frequently horrible acts of violence, incest, Arsefaces, etc. The comics are a blasphemous ball, but could the TV show live up to it’s source material?

Well, based on that premiere, I would say yes, with abut. The casting, which is probably the toughest part of bringing to life a series of comics as iconic as Preacher, is spot on- Dominic “And To Think I’ve Never Wanted to Fuck a Priest Before” Cooper does a solid job in the oft-thankless leading role (despite an initially quite exciting mixture of accents), and-while I hate describing any character this way- Joseph Gilgun’s wise-cracking (ugh) Cassidy injects some legitimate humour into the pitch-black script. Ever since I first spotted him in Misfits, even in the season that was swiftly going off the rails, it was clear that he had the chops for brilliantly dark comedy, so it’s good to see them exercised here.

I could have done without Ruth Negga’s opening shot as Tulip being her completely naked (because come on), but the show worked hard to prove that she was far from just some gun-toting eye-candy in the rest of her hard-edged appearance. So yeah, they got their big three bang-on right, all of them getting a badass action scene to themselves (Cassidy’s popping of the cork from the champagne bottle he had wedged in someone’s chest, admittedly, was a work of actual genius and tipped Gilgun’s performance as my favourite of the lot). The setting, too, feels right, with the tiny town of Annville coming across as appropriately apathetic towards Jessie’s attempts to redeem them. It’s got the sense of humour, the bloody violence, the occasional heart of the comics, if not the story, which it basically ignores. So what’s the but? 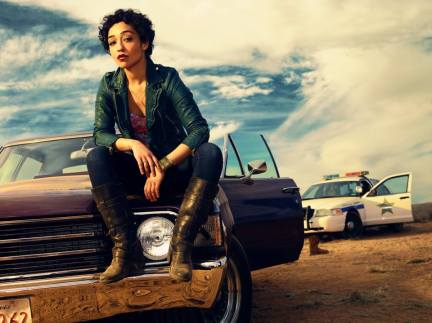 Call it pilot problems if you will, but Preacher felt, at times during it’s premiere, as if it was pushing too hard to be edgy. And trust me, this material needs no edging up- which made that staggeringly badly-handled domestic abuse/BDSM/child abuse plot seem not just surplus to requirements, but a genuinely baffling addition to the show. I mean, it felt as if the writer had been attempting to put a twist on the usual “beaten wife” plot (that AMC’s flagship show, The Walking Dead, handled oh-so-terribly last year) by having the woman literally ask for it, and aiming the abuse at her son instead. It was a big, ugly gash in the middle of the episode, and makes me worried that the show is going to continue groping around in ill-advised “edgy” territory when it might be the last show on TV that needs it.

So yeah, overall, I see good things in the future of Preacher, with a great cast, fleshed-out world, and awesome action sequences that mark it out as one of the most intriguing pilots I’ve seen in a while. As long as it can steer clear of deliberately and pointlessly “shocking” territory and focus in on all the horrors it already has, I’m cautiously optimistic that Preacher may even live up to it’s comic book counterparts.