Ah, The Simpsons-the greatest show on earth, as I’ve previously discussed, and the binding force between all my disparate little clusters of friends, a true bringer-together of people, a masterpiece in (not-so-anymore-) modern comedy and animation. And yeah, no-one’s arguing that the last, well, fifteen or so seasons have been as good as the first decade of the show, but it will always hold a special place in my heart- heartfelt, hilarious, and often hysterical, The Simpsons is and always will be the pinnacle of animated comedy. So I’m going to indulge myself, and take a look at my favourite episodes from each of the first ten seasons- as we can all agree, the glory years of the show-and no doubt start a genuine turf war as people on the internet violently disagree with me. Join me, won’t you?

Season One: Some Enchanted Evening

Somehow, this was the first full episode the show produced, even though it was the last to be broadcast in their debut season- and it’s by far the most Simpsons-y of that first season that was spent mostly groping around trying to find it’s feet (Krusty Gets Busted aside, of course). Homer attempts to romance Marge as the kids full victim to the Babysitter Bandit in a pitch-black and also strangely sweet outing, featuring an awesome guest performance from Penny Marshall as the Babysitter Bandit herself.

Looking at the list of season two episodes- Dead Putting Society, Bart Gets an F, Lisa’s Substitute- I was immediately overwhelmed by a feeling of panic as I realized that even in it’s second season, The Simpsons was pretty much killing it week in, week out and there was no way to pick a best one. But, of course, this was the first appearance of those now-famed Halloween episodes- yes, this is the one with their The Raven parody, as well as high-concept takes on Twilight Zone episodes and parody of The Amityville Horror that may have scared me as a child more than the actual film did.

Now, I know a lot of people will fight me on this- the third season is, after all, legitimately flawless, and packed with splutter-worthy gags, outright surrealism, and a lot of heart- but this episode has a rewatchability unrivaled by the rest of the episodes. Anything Moe-centric is usually brilliantly dingy and grim, and this episode packs it on hard- the genuinely horrible Cheers parody song (which I know all the words AND harmony parts to), Homer’s Moe-centric breakdown, and the eventual Phantom of the Opera climax to the episode (also, somehow, Aerosmith). Now THAT’S television. 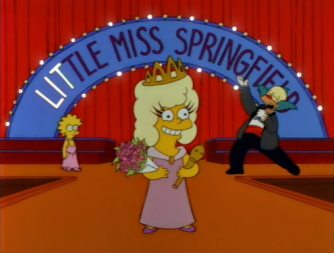 Look, I am Lisa Simpson. I was watching The PTA Disbands not long ago with the consort, and when it came to the “Grade me, grade me, I’m ever so smart!” scene, he just gave me a very long, hard look. So Lisa-centric episodes always stand out to me, and this one has always been a secret favourite from this season, even with classics like Homer’s Triple Bypass and Last Exit to Springfield. A stridently feminist, outrageously fun piece where Homer tries desperatley to win Lisa’s love by entering her in a beauty contest, it’s got heart, soul, and ideals amongst the illegal Colombian eyelash extensions. Even if I have always wanted to try a Laramie cigarette.

In another unfairly excellent season, you absoloutely can’t beat the sheer comedy value of what everyone can politely agree is the best Sideshow Bob episode. Obviously my love for Kelsey Grammer helps a lot here, but you can’t argue with the joke-per-minute ratio in this non-stop, gag-packed twenty minutes: Sideshow Bob trying to write the perfect threatening letter, Homer failing to understand the concept of witness protection, Bart avoiding death by demanding to hear a series of showtunes (a method that would also work on me, if you feel that’s information you may need to know for the future)…this is comedy gold, The Simpsons at the purely funny, unbeatably silly best.

There’s a very particular reason this episode is so special to me- and that’s because it was broadcast only a few hours after I was born. Yes, this is my birthday episode, and it also just so happens to be fucking brilliant. “See you in hell, Candy Boys!” is a phrase I get a surprising amount of mileage out of, only the icing on the cake of an episode that satirizes mob justice, outrage culture and the tabloid media through the lens of a candy Venus de Milo. Only The Simpsons could actually land their points with such a ridiculous premise, but they pull it off in an episode that balances madcap comedy with fiercely potent social commentary. Put that in your pipe and smoke it, Family Guy (let me get one shot in, please).

Season Seven: Scenes From a Class Struggle in Springfield

In the commentary for this episode (yeah, I watch the commentaries, wanna make something of it?), the director Susie Dieter mentioned that this is the episode that she most often gets women telling her is their favourite; add me to that list, because this gorgeously animated and lovingly crafted episode is up there with the best they ever did. It’s a fantastic Julie Kavner performance as we suddenly figure out just how frustrating and difficult life is for Marge, and why she’s so intent on bettering herself and her family. It’s hard to balance an episode with this much of an emotional core with the by-now patented brand of Simpsons comedy, but this episode did it with style. Also, am I the only one who kind of fancies Marge in that Chanel dress?

“Alcohol: the cause of, and solution to, all of life’s problems.” This magnificently funny and creative half-hour all revolves around the magic of booze, framed with a throwback forties detective style and a madcap sense of fun. Some episodes don’t have much going on past their sheer comedic brilliance, and this is one of them- there’s no real point to Homer becoming the elusive Beer Baron and flooding the town with illegal alcohol as the stoic Rex Banner attempts to hunt him down- it’s just a silly set-up for a bunch of brilliant jokes and set-pieces (“I don’t know what you expect to see in this, uh, friendly, neighbourhood pet shop”) as the animators have great fun bringing to life the retro ethos of the episode.

Though season nine features the episode that many people believe to be the turning point in terms of quality for The Simpsons, The Principal and the Pauper, there was still some steam left in them yet- particularly for this satirical bit of fun, peeling apart manafactured, manipulative TV and throwing Bart and Lisa into competition with each other as they battle for the top spot at a TV station. It’s one of the last solid episodes to focus on this relationship, a high point for the wobbly few seasons to come. And it’s got a whole lot of the inimitable Kent Brockman, the greatest news anchor in TV history.

The series takes a notable drop in quality at the decade mark, and it was hard to actually pull out the best episode from this season because so many of them are just…okay. But this wouldn’t be a list about The Simpsons unless it ended on an episode in which Homer failed dismally and let others succeed in his wake- it’s daft fun with a throughline of existential panic about what we leave behind, as well as featuring the chair that can’t fall down which is an invention I would gladly take advantage of. As the series drifted off into the wild yellow ether, this was one of the last truly great episodes they ever produced.

So, those are my best Simpsons episodes (from the only seasons that matter, of course), what are yours, and how violently do we disagree?

2 Comments to “Best Episodes Ever”