So, since watching last night’s episode Face the Raven, I’ve found myself kind of stuck about what to say about it. Clearly, it’s an important episode-maybe the most important episode of the season so far-but at the same time it felt strangely unaffecting, and I couldn’t figure out if that was a good thing or a bad thing. And, oh, before I begin, SPOILERS. SERIOUSLY. DON’T READ THIS IF YOU HAVEN’T SEEN THE EPISODE. Don’t say I didn’t warn you.

As I suspected, this week saw the (ostensible) end of Clara Oswald, which makes it a tricky episode to review. I started reviewing Doctor Who on this blog when she arrived in the series as a regular-my very first recap was The Bells of Saint John– and I’d quite like to go back and look at Clara as a character and look at how her arc has and hasn’t worked, considering how much of an investment I’ve put into her story. But that would do a disservice to what was an interesting episode, so let’s first take a look at the meat of Face the Raven, written by Sarah Dollard.

The episode kicked off as Rigsy (the excellent Jovian Wade, back from last season’s shrug of an outing, Flatline) ended up with a tattoo on his neck that was counting down to zero. He calls up the Doctor and Clara, and the three of them head off to discover that the person behind the tattoo is none other than Ashildr. She’s running a kind of refugee camp for displaced aliens, one of whom Rigsy apparently killed, and she’s sentenced him to death by the Pigeon of Doom (or a raven that imbibes their soul, whatever). Clara offers to put herself in his place, believing the Doctor will be able to get her out of the whole inevitable-death scenario, but he can’t and she ends up buying it. Not before, of course, Ashildr reveals the whole thing was a trap to lure the Doctor and that she never had any intention of killing Rigsy in the first place. 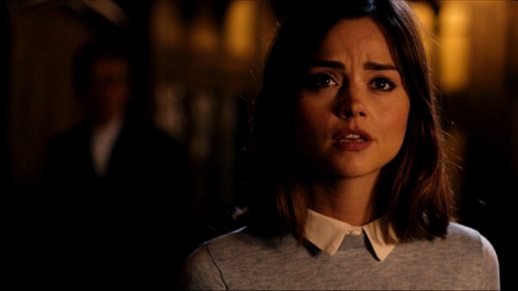 Much as I enjoyed this episode as I was watching it, I felt like it did….struggle somewhat, what with the giant, huge, episode-dominating plot point that lands in the middle of the story. Clara’s death goes off like an atom bomb and flattens almost everything around it, making it hard to look at the episode as an independent entity: I will say that I am liking Maisie Williams more and more with every passing episode and Dollard came up with a strong script that did well in filling out the background in the limited time it had to do so, but there’s only really one thing worth talking about in Face the Raven.

Okay, so let’s think a little bit about Clara. I think, if this is her exit (which I strongly doubt, but it’s certainly coming in the next two episodes, so let’s run with it for now), she’s been by far my least favourite assistant. I never quite felt like I had a grip on Clara as a character, even in the two and a half season she’s been around. I’ve been saying, ever since the start of season eight, that she’s spent most of Capaldi’s episodes doing whatever the plot requires her to do as opposed to having anything really consistent of her own to hang on to, and that’s been a huge problem with her character.

And I think it’s her nebulous nature that makes it difficult to genuinely feel affected by her death this week. Which is not to say it wasn’t handled well (aside from the four-angle smash-cut of the actual moment of her death, which was spectacularly badly judged)- in fact, I’d wager that it’s the best her and Capaldi have been together in his entire run, and she was given a quiet dignity and bravery by the script and Jenna Coleman’s solid performance. But it just felt as if once again she was doing what the Doctor’s story needed her to do, and that’s irritating. (Also irritating: another fucking pointless reference to Clara getting off with Jane Austen. I wrote an article on sexuality in Doctor Who a few weeks ago so it was fresh in my brain, so that line had my eyes spinning like fucking marbles, but I digress).

Yes, I get that the series had been trying to show that she was reckless and believed herself to be invincible, and was constantly putting herself in more and more danger after the death of Danny Pink (BY THE WAY: does Danny Pink still not have some kids to spawn, if we are to take what happened in Listen seriously?). But none of it felt…what’s the right word here? Earned? Consistent? Real? Yes, real-when Clara was revealed to be a series of splinters in the Doctor’s timeline back in series seven, that made a lot of sense to me, because she’s always seemed more like a fast burned-out sliver of a character than a real person. Her reckless and pointless death fits pretty well with how I’ve always interpreted her as a character, but only because it always felt as if she was a bumped-up episode companion who way overstayed her welcome.

And, let’s face it, she’s been around too long. There’s a tacit agreement amongst my band of Doctor Who fans that Clara probably should have headed off in the Christmas special, as she felt like a hangover from Matt Smith’s manic, excitable young Doctor and never really fit too well with Capaldi’s dour style. I’m thoroughly looking forward to a new companion who’s original to Capaldi’s Doctor, because, in all honesty, Clara has seemed out of place since Deep Breath. And I don’t intend that to be a criticism of Jenna Coleman, who’s usually been quite solid, but I’ve never wanted rid of a character more than Clara.

And that, ultimately, is why Face the Raven didn’t hit me with that much of an impact. I’ve been waiting for Clara to leave the series pretty much since the start of season eight, and it’s difficult to feel sad about losing a character I was glad to see go (which, to stress again, was nothing to do with the script or the acting, both of which were at season-highs in this episode). And the problems with Clara don’t fall on this episode, they fall on the two and a half seasons leading up to it.

What I am looking forward to, though, is how this affects the Doctor in the next few episodes. Though I know Jenna Coleman will be back in the season finale, we also know that she’ll be gone by this year’s Christmas special, and her utterly pointless death surely has to weigh heavy on the Doctor who basically led her by the hand into her fate. Capaldi has never been more impressive than when he was quietly explaining to Ashildr that she should steer clear of him, even though Clara had made him promise mercy on the person who killed her, and I want more of that. Plus, next week looks really interesting, and I’m thoroughly looking forward to seeing how the next couple of episodes unfold.

You best not be planning a fake-out with Clara, all that said. I’ll have you yet, Moffat.