Doctor Who has been part of my life for ten years now. It started with the rebooted series, watched over dinner on a Sunday night, before Scrapheap Challenge and Time Team. It was my introduction to pop culture, in a lot of ways- the first show that I followed which had long-running, over-arching plots and real character development, it sparked a love affair with television that I still can’t see an end to. I started reviewing Doctor Who from season seven onward on this blog, I met my current boyfriend when he was dressed as Doctor Who (it as Halloween, to be clear, but it is basically his daily attire), and I still have handfuls of Doctor Who annuals tucked away at the back of my bookcase. So when it came time to pick something else to recap, there was only really one choice.

So I’m recapping New Who, from Ecclestone to Capaldi, right here, starting right now. My boyfriend/also a freelance writer will be blogging his recaps of the same episodes over at his blog, Red Whine (because he’s ginger and also a nightmarish whinge- I had a hand in the name), so you can compare and contrast our two very different attitudes to our favourite show-here’s a link to his review of this episode. It might cause us to break up, because we usually have to avoid talking about Doctor Who lest in cause another genuine row, but that’s the sacrifice I’m willing to make. For you. Faithful blog-readers. Oh, and if any of you have your own blogs and would like to join in with our recaps, please do-just drop me an email/tweet so I can link your reviews and let you know what the rough schedule is.

Whether you’ve watched the series before, or want to start watching it now, I’ll be trying to keep these posts spoiler-free (ish) and welcoming to those who don’t know the mythology of the show as well as I do. Which is maybe the nerdiest thing I’ve ever felt smug about. Seriously though, if you haven’t watched it, please come join me on watching at least the first series, because it’s awesome and you can spare forty minutes a week to awesome, can’t you?

So, without further ado, let’s take a look at season one, episode one- Rose.

Let’s get one thing straight: this is the best iteration of the theme song.

Right? Awesome. I’m glad we agree. Murray Gold wrote some incredible music for Who, but he didn’t beat this, and never will. Especially not with the bastardisation of the opening credits we’re subject to now (I’ll have you yet, Moffat). But let’s now think of how badly this show was going to let me down- let’s focus on how utterly bloody brilliant everything about the first series was.

I make no secret of the fact that Christopher Eccleston is my Doctor. Sometimes I get quite irrationally angry about the fact that he only had one season, and stomp around and curse things and bargain with the Gods to sacrifice the first half of season seven for another few episodes of Chris. And I think a huge part of it is his introduction in this episode- how could you NOT find him fascinating? The plot is a throwaway piece of nonsense, as the Doctor attempts to stop Autons (living plastic dummies) destroying the human race, used as a framing device to introduce the Doctor and fill in his backstory for viewers who don’t know who he is. I’m really fond of the way the show introduces him- leaning through a door, grabbing Billie Piper’s hand, and declaring “Run!”- but I’d forgotten just how good the detail was in this episode. Take, for example, the Doctor’s speech to Rose when she asks who he is:

” Do you know like we were saying, about the earth revolving? It’s like when you’re a kid, the first time they tell you that the world is turning and you just can’t quite believe it ’cause everything looks like it’s standing still. I can feel it…the turn of the earth. The ground beneath our feet is spinning at a thousand miles an hour. The entire planet is hurtling around the sun at sixty seven thousand miles an hour. And I can feel it. We’re falling through space, you and me, clinging to the skin of this tiny little world. And, if we let go… That’s who I am. Now forget me, Rose Tyler. Go home.”

I WISH I COULD FORGET YOU

That’s some pretty heavy shit for kid’s TV. It’s a genuinely brilliant speech, and is filled out by an entertaining turn by Mark Benton as Clive, the conspiracy theorist obsessed with the Doctor who Rose contacts for more information. Though she writes him off as insane, he manages to explain his constant appearences through history, his apparent immortality, and his changing face, not to mention squeezing in the immortal line about the Doctor’s only constant companion being death, and I’m a little surprised my parents let me watch this considering what a terrifyingly hyperactive imagination I had (vis: When I was nine and first watching this episode, I had to get my Dad to turn it off before the Doctor even arrived because I found the Autons so scary. Now I just sit around watching The Human Centipede over dinner. Funny how things change). He’s equal parts witty (that “it’ll never work- he’s gay and she’s an alien” line is generally how I describe my relationship), cutting, compassionate and hard-edged (and bloody handsome to boot- just me?), and I love how sharp his scripting makes him. We’re given just enough of the Doctor to tantalise us, but when it comes down to it, this episode isn’t about him. It’s about Rose. 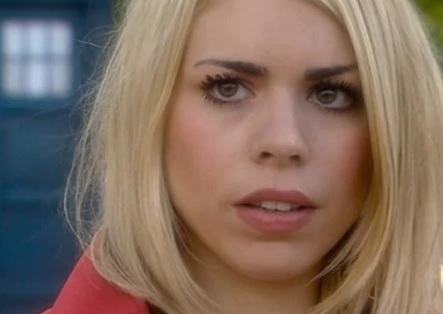 Never without twenty layers of mascara. Seriously, even in the scenes where she’s waking up.

Ah, Rose Tyler: England’s Rose, played by Billie Piper, a tween pop starlet who stars as the nineteen-year-old chav and best assistant ever (she’s since proved herself over again in stuff like Penny Dreadful, which you should have seen by now). The episode’s named after her, for Christ’s sake- this outing, and to an extent the whole series, is about her emotional journey. And the show really takes it’s time setting up her life, and the characters therein. I always really liked that Rose’s life wasn’t awful, just that average kind of dreary, because it would have been so easy to give her an awful boyfriend or an annoying family to escape from. But here, Noel Clarke (who’s BAFTA speech is one of the things that inspired me to take up writing, so thanks for that, mate) as Mickey and Camille Coduri as my MILF-Goddess Jackie are just people, people that you know, people that you work with. They’re played with amazing warmth by both the actors (Camille Coduri’s delivery of “There’s a strange man in my bedroom…anything could happen” is up there in my top ten moments of the series, and Noel Clarke and Billie Piper have a really believable chemistry). Their normality isn’t bad, necessarily, but, when offered the chance to escape, Rose takes it. Because we all would.

And there’s the best part about this episode. The assistant has always been an audience surrogate, but she’s never been more relatable than Rose. Because Rose is living a completely unremarkable life, a moderately satisfying existence that doesn’t really lead to anything of note, as many of us are (or secretly believe we are). So when she’s offered the chance to change everything and travel through time and space in a blue box, of course she says yes. By inviting her along on this adventure, the Doctor (and by extension the show) is inviting the audience, too. And by God, I defy anyone to turn down a trip in the Tardis after this belter of an opening. Join us next week (maybe) for episode two, The End of the World, and maybe a bit less pretension, if I’m feeling generous.

Oh shit, Rose is younger than I am now in this episode. I want to kill myself. I’ll have you yet, Davies.