Ah, man. I stand by everything I said last week about whether it’s defensible to use violent crimes like this for entertainment, and whether ACS: Versace was specifically passable in that sense or not, but fuck me if that wasn’t just a fantastic fifty minutes of TV.

It’s hard to know where to start with an episode as dense and layered as this, but I’ll begin by taking a look at the couple at the centre of this story, Marilyn and Lee Miglin (played by Judith Light and Mike Farrell, respectively). American Crime Story began almost at the end of it’s own story, with the killing of Versace merely the climax to the piece, and now they’re going back in and piecing together the details and influence of Cunanan’s previous murders in a compelling bit of structuring that forces you to pay attention to every detail and string it together as you go along.

But aside from me wanking myself silly over the way this story is put together (and make no mistake, I will continue to do that every chance I get), it’s this episode, A Random Killing, we’re talking about this week. Last week was all about the bright bustle and disco music of the nineties Miami gay scene, a sickly bright colour palette punctuated by an impossibly catchy soundtrack: this week, we head out to the Miglins upper-class, hard-earned existence, all long stretches of ambient sound and washed-out beige and grey. The contrast is striking and immediate, and sets us up for a very different story than the one we got last week.

While Lee Miglin is the victim here, it’s his wife, Marilyn, who’s the focus of the episode – while there aren’t a huge number of comparisons to be drawn between Miglin and Gianni Versace, Donatella and Marilyn share natural echoes of each other: their strong business-minded natures, their intense personal and professional relationships with the murdered men, their reactions in the face of their deaths, allowing the stories to feel connected but not indebted to each other. Plus, picking Marilyn as the centre of this brings us so much more intimately and that makes it so much more impactful. 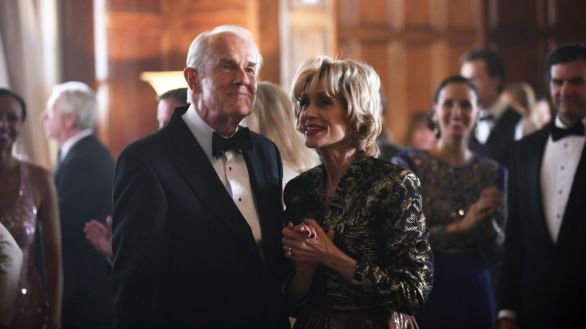 Judith Light will be getting an Emmy for this episode alone, and I will be leading the charge for that: from the exhausted horror on her face when she hears the scream telling her that her husband and life partner is dead, to her breakdown behind closed doors over the loss of the man she loved, to the last shot of the episode, her closing her eyes for a moment to catch her breath as she talks about her late husband while shilling for her business, it’s a powerhouse performance that’s impossible to look away from. The tense, ragged moments she shares with Farrell lend her devastation over his loss even more weight. It’s one thing to depict this relationship as impossibly perfect and understand their sadness when it’s over, but it’s another to give this relationship such depth and imperfection and solidness and then to tear it away from us within minutes. Fuck. Fuck. This is one of those episodes that’s going to stick with me, because Lee’s loss was felt so keenly by a deft script and a fantastic set of performances.

Elsewhere, Cunanan appears more as this spectre than as a character in his own right, and that works just as well as his previous starring roles: his slow picking-apart of Lee in a literal and physical sense is chilling to observe, not least because I can’t tell if he was actually enjoying it or not. A cackling villain is one thing, one who doesn’t quite seem to understand his own motivations is something deeper. His murder of the man he steals the red truck from – perhaps the actual “random killing” of the episode title – is panicked and rough and sickening in it’s desperation. I’ve not been convinced the show had a grasp on Cunanan as a character till now, but now it’s clear that Cunanan doesn’t even have a grip on himself right now. That fury and bafflement over Lee refusing to name a tower after himself conveys so much about him, and his destruction of the plans for that tower is the pettiest thing he does and yet somehow the most coldly brutal.  Fair play to Criss, who I never would have believed could convey this kind of depth, but this is a ice-blooded, white-knuckled nightmare that I am feeling  as a performance.

There’s so much to say about this episode that I’m going to stop myself now, but let me just touch on more of the big pile of Shit That I Loved this week: the continuing exploration of the notion that pushing homosexuality underground and stigmatising it is part of the reason Cunanan got away with this for so long, Gwenyth Horder-Payton’s horror-movie direction, the fact that the backwards storytelling lends an inevitability to the plot that gives everything a nightmare tinge, Darren Criss’ jawline (sorry).

Honestly, this is one of those episodes that I needed to go and have a good long lie down after, the kind that I’m going to be running through my head for days trying to figure out every detail that I missed out on the first time around. So far, ACS: Versace has been good without landing at great, but with a confident, controlled, and weighty episode, they’ve careered into the brilliant at last.

If you enjoyed this post and want to see more stuff like it, please consider supporting me on Patreon!