A FLAVORFUL SIDE NOTE: I have updated my Patreon rewards, and for just two bucks a month you can get access to a whole new set of secret TV recaps that I’ll be writing exclusively for my Patrons. And there are a bunch more rewards on top of that (including picking TV shows and movies for me to write about!), so please check out my Patreon and consider supporting this humble blog if you can!

I want you to picture American Horror Story – not just this season, but all the seasons – as a flimsy cardboard box. The actual structure is made up of the aspects of this show that are true no matter what season you’re watching: you know, the sex, the nudity, the extreme violence, Sarah Paulson. In some seasons, some episodes, that box is full of stuff that props up these structural elements, like strong themes, sensitive characterisation, a plot that holds together and makes sense. And in others, there’s none of that, nothing to hold it up from the outside in, and the whole thing collapses in on itself in a great soggy mess from where Ryan Murphy thought it would be a good idea for Evan Peters to piss on it.

I never thought I’d say this, but I’m getting a little tired of this face.

I’m sure you can guess from this opening that this means that this week’s episode of American Horror Story was for sure one of the weakest of the season. But that’s not for lack of trying.

Because Winter of our Discontent (I only just figured out the pun and I hate it) was perhaps one of the most American Horror Story of American Horror Story episodes ever to be broadcast in the show’s seven-season run. If I had to come up with a list of things that surmised AHS, most of them would have been here: a very unsettling orgy scene, Evan Peters in a man-bun jacking off, a hell-house packed with extreme violence against the disenfranchised of society, an attempted rape, a repressed gay Nazi, Adina Porter growling “rot in hell” – hell, the only thing it was missing was death by spike-sodomy. These might not be things that have actually been in AHS before, but they summate succintly the spirit of the show: sexy violence, violent sexiness, incredible performances from underused older actresses, butts. And they were all here. 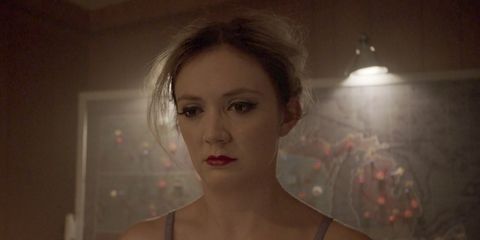 A face I will never get tired of. GET WOKE!

But that didn’t make this a good episode. No, quite the opposite – Winter of our Discontent was really a complete mess than just took a look at the plot as it stood and then skipped three chapters ahead and left us scrambling to catch up.

For example, we got a flashback where Kai and Winter end up at a hell-house run by a deranged priest exacting revenge against those he considers sinners. Kai frees them and murders the priest – in a far-too-long, derivative, and pointlessly violent sequence – and this is meant to provide groundwork for the person he’s become (sidenote: this entire sequence is narrated by Winter, in the middle of a busy kitchen, in front of dozens of people who don’t know about the cult, presumably at length, because what is internal logic). And that person? An Adderral-chomping pseudo-religious manic who wants to have a threesome with a gay Nazi in order to impregnate his sister and create the Messiah. Yeah.

I feel like the show was trying to go for a slow descent into insanity with Kai, having him slowly become unhinged and paranoid and turning to increasingly irrational methods of control to keep ahold on the cult he’s built. But it hasn’t been: Kai goes from well-spoken, populist, ice-cold control freak to hilariously mad in the course of two episodes, and bear in mind that the last episode was mostly about Valerie fucking Solaras. Evan Peters looks like he’s choking back laughter for at least a third of his scenes, and I could barely look at the screen just to spare everyone involved the embarrassment. Maybe the throughline of his descent works better on a full-season watch, but this is a week-to-week show so they can’t rely on that.

Is this biblical imagery obvious? Yes. Do I love it? Also yes.

Cheyenne Jackson and Colton Haynes finally get a chance to shine individually and then bite the dust – Cheyenne Jackson after Sarah Paulson betrays him in what I’m reluctant to call a “twist”, and Colton Haynes after he attempts to rape Winter and gets shot in the face. Now, I just want to take a little aside here to talk about gay men this season, because Colton Hayne’s surprisingly well-performed little flashback had him as a Nazi (or at least someone with bleached-out hair and a whole lot of Nazi memorabilia in his house) attempting to fuck a woman and only being able to get it hard when he’s violently choking her; he indicates that he’d have no problem keeping an erection with Winter if he knew she didn’t want it, implied to be because he sexually enjoys nonconsensual violence against women. And the other gay man in this show – also dead – was Harrison, who was also all too happy to betray the woman closest to him and let her die once he got some of that sweet dick. 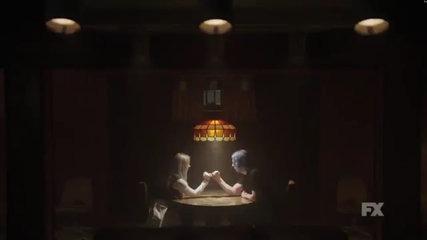 There’s certainly an interesting story to be told about misogyny in the gay male community – hell, the show is almost there when Kai and Colton Haynes (not going to learn his character’s name now) discuss the latter’s aggression against women – but this show just can’t quite get there, and decided it was better to cut to a slow-mo shot of Evan Peters topping Haynes. Fuck, I’m not even sure it knows that it’s telling that story, specifically. It left me with a bad taste in my mouth, along with an earlier scene where Kai points out that the people captured and tortured in the hell house weren’t even guilty of the crimes the priest judged them to be (the drug addict was going to get clean at a clinic, the “gay man” was just volunteering at an AIDs clinic, the woman was only attending Planned Parenthood to get treatment for a UTI) and thus they were innocent and unworthy of punishment, skipping right over the fact that even if these people had been “guilty” of the “crimes” (of being gay, or an addict, or getting an abortion) the priest had punished them for, they still wouldn’t have deserved it. It just…nah. The show can be awesome at social commentary and has been at points this season but this was Not Good.

That’s a face and a half, I’ll give him that

Back to that Cheyenne Jackson twist: another underused season for my favorite jawline, as he bites the dust soon after figuring out what his brother, Kai, has going on. Sarah Paulson finally takes some initiative after sort of kicking about in the background of a couple of episodes, and I’m vaguely, sort-of looking forward to seeing what the show will do with her now she’s actually part of the cult, but it feels like things are spinning a little out of control. Adina Porter is also apparently out, after chewing out Kai in a fantastic scene that has confirmed if the rest of her work this season didn’t that she deserves an Emmy, and there’s no sign of Frances Conroy after last week’s “reveal”.

What are you thinking of this season? Do you have any other guesses as to how it will pan out? Are you even still watching? Let me know in the comments below, or hit me up on Twitter! And if you’re hungry for more recaps, take a little mosey over here where I’m recapping this season’s weirdest show!