Welcome back to another merry week of Doctor Who-less than a month till the new series! Are you excited? I’m profoundly not, partly because Moffat (I’ll have him yet) has announced that there will be a good number of two-parters in season nine, which would have been great news, oh, about four years ago. Ever since the terrible Living Flesh or whatever episodes from a couple of seasons ago, two-parters in New Who have increasingly seemed more like space-fillers than space adventures (it’s okay, I’ve already killed myself over that attempt at wordplay). Which is a tenuos enough link to get us into our next recap, which covers the first ever two-parter of the rebooted show- Aliens of London, and World War Three (we’re doing double-handers in one review, because these recaps are already stretching out in front of us like that neverending corridor in Time Bandits). And you know what that means, don’t you? We’ll be spending a couple of episodes with the inhabitants of Raxacoricofallapatorius (and yes, I knew that one off the top of my head, or at least you can’t prove otherwise)- better known as the Slitheen. As ever, check out another take on these episodes over at Red Whine.

Look, I know that these episodes are…divisive, at best. Even I can concede that they’re probably the weakest episodes of season one. But Christ almighty, at least when this season was bad, it was still fun (see: the arduously pretentious season 8 shocker Kill the Moon). The Doctor brings Rose back to her own time again, only to find that she’s actually been gone for a year- and as Rose reconciles with her distraught, badass mother, Jackie (who, in this episode, becomes thw first mther to slap the Doctor in the face), and her boyfriend, Mickey, something somewhat surprising happens.

Aliens! Or, at least, alien. In one of the best red herrings I’ve seen before or since, an alien spacecraft carrying a pig-like creature-

Ugh, this thing really freaked the fuck out of me on re-watching. Is that a real pig’s head? Ugh ugh ugh.

-smashes through London. As the authorities hustle to figure out what’s going on, the Doctor deduces that the spaceship was actually launched from earth, and that the creature is just a pig-albeit it one modified with alien technology. UNIT (appearing in the new series for the first time, hurrah!) recruits the Doctor to help them figure out what’s going on, as the mysteriously missing Prime Minister is replaced by an MP who isn’t quite what he seems.

Let’s be clear here: this episode is mainly just a collection of moments that I find amusing. Matt Baker, from my generation of Blue Peter (if you’re not British and you don’t know what that is, this clip should pretty much sum it up for you) appearing briefly baking his “very own edible spaceship” as the Doctor flips through channels, Jackie laying the smackdown on the Doctor for stealing away her daughter, and, of course, the introduction of Harriet Jones (MP Flydale North), one of the most gloriously well-realized supporting characters of Davies’ run.

The actual substance of the episode- farting aliens crammed into human body suits trying to take over parliament- is pretty awful when you actually think about it, but hinges on whether or not you find this-

-on any level intimidating, amusing, or even watchable. I think they’re pretty far from actually scary (I mean, look at those fuckers- they look like some nightmare version of a Baby Born doll), but fuck it, I’m a big fan of using real effects over CGI and I like the fact that for the most part, these things actually exist for the characters to interact with. Some effort went into the design, and even if having them fart away while wearing the skin of their human conquests diminishes their fear-factor somewhat, the show was still finding it’s feet as family viewing and I’m not going to begrudge it some toilet humour. And anyway, Doctor Who has a long and glorious tradition of cramming hapless actors into pretty shit rubber suits in the name of a story, so why should we start getting snobby about it now? Case in point: 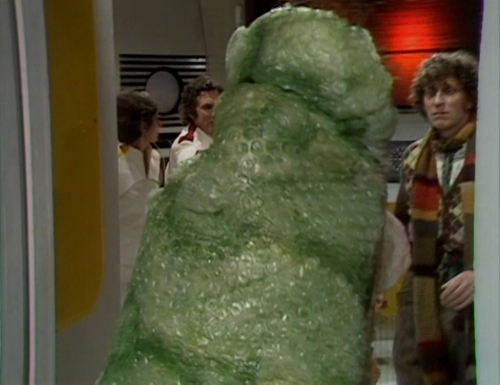 If we can consider a show with the green bubblewrap monster a classic, then I’m sorry, but we have no right to be deriding the Slitheen, who are Michael Myers, Golden Freddy, and the notion of death itself rolled into one compared to this.

And I also dig this episode because it’s set on Earth, and we get to spend some more time with Rose’s friends and family. Whenever these episodes roll about with any of the assistants, all it serves to underline is that otherness the Doctor has from the rest of their lives, and how impossible it is to integrate those two things entirely. It’s also nice to see Rose interacting with other humans, for a change, and particularly with Harriet Jones, with their conversations existing apparently only as proof that Moffat cannot write women anywhere near as well as Davies can (seriously, give me five words to describe Clara off the top of your head. No disrespect to Jenna Coleman, who’s great, but Rose actually has, you know, a fully-formed character as opposed to a thousand lines about her short skirts) and to annoy me with the knowledge that we have to deal with Stephen Moffat’s bullcrappery for another two years at least.

But, my non-sequitor ranting aside, I like this episode, despite it’s faults. It’s a good, silly romp that underlines all the things I enjoy about Doctor Who at it’s most silly- an inherent recognition of it’s daftest, the enthusiasm real-life serious people-

(for those not acquainted with him, this is Andrew Marr, a well-respected political journalist and broadcaster, starring in a brief cameo in this episode)

-in getting involved with a story this dumb, and a cast of warm, well-rounded supporting characters joining the Doctor and his assistant in saving the world. And, since there was no room for it anywhere else, I’ll round of the episode by pointing out that this is the second episode is as many weeks to introduce a main cast member of Doctor Who spin-off Torchwood, in the form of Tosh, the doctor who examines the alien pig-man at the start of the first episode (in fact, canonically, she’s a computer expert and is covering for her hungover doctor colleague Owen, but basically what I’m saying is go watch Torchwood because it’s more fun that you think, okay?).

A prize for the best caption for this picture.