Well, we’re back, for another installment of Fifty Shades of Grey wherein the recapper has to continually remind herself that a new book in this series will be out in a mere two days time. This also means that the recapper will be absolutely mashed off her tits and listening to The Magnetic Fields all the way through writing this, if she’s got any choice in the matter.

(this recapper would also like you to know that she’ll be creating a list of great eroticas that aren’t Fifty Shades of Grey on June 18th, to commiserate the release of the next Fifty Shades book, so swing by for that if you’d like some suggestions for some real literary sexiness)

So the chapter swings into action with Ana emailing Christian to tell him that she got a nice massage thanks to him upgrading her to first class against her will. Christian demands to know who’s been massaging her, and she tells him that it was a “pleasant young man” so he’ll be jealous. Christ on a fucking tricycle, do these two ever just communicate like normal people? The answer is, of course, no, as Ana ignores the flight attendant’s request that she shut off her laptop and reads another email from Christian, wherein he threatens to throw her, bound and gagged, in the cargo hold next time she makes such a remark. Ana has some internal monologue;

“Holy crap. That’s the problem with Christian’s humor- I can never be sure if he’s joking or if he’s seriously angry.”

I don’t know who he is, but this man is a very attractive one, and I am treating myself this evening.

Yeah, so, imagine your close friend comes to you and says “hey, so, I have this new partner who’s super rich and powerful to the point that people probably won’t question a whole lot of what he does, and he threatened me with physical violence and coercion and I can’t tell if he’s kidding or not.” Most people would implore them to leave that relationship immediately for their own safety; EL James wrote a fucking romance novel about it.

Ana goes to sleep, after emailing Christian to tell him that she doesn’t know if he’s joking or not, and apologising for making him mad because he upgraded her ticket to first class and that’s her fault, of course (fuck everything). He replies, with “two-palms twitching CEO” at the bottom of his email. Aside from the whole, y’know, non-consensual beating part, just imagine someone who’s palms twitched uncontrollably at random intervals. Again, EL James chose to write a romance novel about the guy with the spastic fucking hands.

Ana sends Christian a stupidly long email (seriously, most of this chapter is just email exchanges between the two of them, because the thought of opening my Gmail on an internal flight makes me want to spend an hour with my Happy Drawer), and let’s take a look at some choice sentences, and see how they match up with that super-fun abusive relationship red flag system we had a look at a few chapters back:

“You know how much I dislike you spending money on me. Yes, you’re very rich, but it still makes me very uncomfortable, like you’re paying me for sex.”

Does your partner see you as property or a sex object, rather than a person?

Does your partner act excessively jealous and possessive?

“You can’t write things like that to me- bound and gagged in a crate. (Were you serious or was that a joke?). That scares me…you scare me.”

Does your partner hurt you, or threaten to hurt or kill you?

Do you feel afraid of your partner much of the time?

Do you feel that you can’t do anything right for your partner?

But you’re right, EL James, there’s NOTHING in this book that might imply to the casual onlooker that this is an abusive relationship. Ana consoles herself when he doesn’t reply, thinking that it’s five in the morning in Seattle so he’s probably asleep. She hopes that he’s not playing “mournful laments” on his piano, and I shout “OF COURSE HE’S NOT, BECAUSE HE ONLY DOES THAT WHEN HE NEEDS YOU TO KNOW HOW BEAUTIFULLY DAMAGED HE IS YOU FUCKING IMBECILE”. Incidentally, some of the wine appears to have evaporated in the heat, because there’s no way I could have had that much already.

Ana meets her mum and her stepdad Bob at the airport, and the women both head to the beach, where Ana’s mum-who has yet to materialise a name- is wearing a giant hat. I like this woman. I like her a lot. Ana talks to her mum about Christian, because God forbid this book have anything in it but pointless ramblings about the only man to earn the title of “irritating” before “abusive”;. Ana’s mum just tells her to take everything he said literally, and Ana conveniently forgets that bit where he said he was going to bind and gag her and instead focuses on stuff like “you’ve bewitched me” and “I don’t want to lose you.” Because yeah, those are phrases which really leave you puzzling over whether or not a guy likes you.

Ana’s mum gets weepy thinking about Ana’s dead father, but Ana is too busy thinking about how Christian’s moods have NOTHING on her dead father, and the fact that her mother is obviously feeling emotional about that subject mean that they should forget about it and never reference it in the whole length of the trilogy again. Because filling out a character’s background is dumb. This writing makes me want to do a Bernard Black on this book. I’m not sure quite what that means, but I’m sure it would look a little like this.

Ana finally gets a response from Christian. Let’s take this piece by piece, shall we?

“Yes, I’m rich. Get used to it…isn’t that what boyfriends do? As your Dom, I would expect you to accept whatever I spend on you with no argument.”

But Christian, as you’ve made clear, it’s literally impossible to be her Dom AND her boyfriend-

He then goes on to say that she has all the power, and that he can’t touch her if she says no, ignoring those times that she’s said no and he’s carried on. He says that he’s in awe of her, etc, etc, and that he needs to earn her trust, and he should do that by FOR SURE not giving her the space she requested and flying cross-country to see her. OOPS SPOILERS!

Ana’s mum wakes her up (still no name), and finds Ana hugging the laptop like a little bitch (note: this is not how the text describes it). Ana gets ready to go for dinner, and her and Christian email interminably back and forth about how she’s rolling her eyes, and her behind is safe for now (haha remember when she was left weeping and distraught the last time Christian spanked her? HAHA). Christian asks if she wants him to zip her dress, and she replies that she would rather he unzipped it. He responds with an all caps “SO WOULD I”, which made me laugh out loud, because I had the image of his erection taking control of the keyboard and insisting on excited all-caps.

Ana signs off “Laters, baby”, and Christian emails her back with the subject line “plagiarism”, and I’m like, damn, risky move EL, considering you plagiarised every ounce of this book from Stephanie Meyer. Remember that? You should remember that, EL, doubly so now that you’re ripping off every singular ounce of her career to date.

Christian says that he’s off for dinner with an old friend, who Ana assumes to be Mrs Robison, ie, his molestor, a word that EL finally uses in the text. Ana goes into a jealous rage, and this chapter is NEVER OVER. 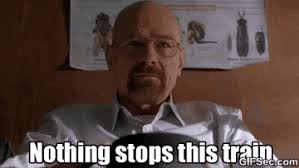 Ana and her mother go out for cocktails, and Ana’s mother-again-delivers some meaningless generalisations about men wanting action and not understanding that women just want someone to listen to them, silly bitches, and then OMG CHRISTIAN IS IN THE BAR WITH THEM!

Hold on to your tampons, folks, because next chapter is the infamous period sex scene.