Well, I’m still making some pretence at sticking to the schedule, so here we are again on Monday recapping Fifty Shades. We’re on to chapter thirteen now, and it’s just as unlucky as the previous twelve. We left off with Christian and Ana attemtping to thresh out some deal over the relationship agreement, and the chapter opens with Ana waking up and having to hear about why her mother won’t make it to her graduation. Apparently, her step-father has twisted a ligament or something, but in reality Ana’s mother probably can’t be fucked traipsing all the way up to her daughter’s graduation while she stares moodily off into the distance wondering if Grey’s going to dick her any time soon.

Ana recieves an email from Christian, reminding her the meaning of the word submissive and imploring her to bear it in mind for their next meeting even though, hey, Ana still hasn’t agreed to the terms of the contract or to be his submissive! Ana insists on driving, because she apparently needs “a quick getaway”. Honestly, I feel like EL James was trolling the lot of us with this pish, wandering around and telling everyone that no, of course she didn’t write about an abusive relationship, what is everyone talking about, while giggling to herself and rolling about on a pile of money like Ranier Wolfcastle.

Couldn’t find appropriate Wolfcastle gif; after a long and arduous search, this will have to do.

Ana does some packing, then goes to bed before she heads out to work the next day. The boss’ son is there, and follows her about being a total dick because apparently no men that Ana isn’t related to can act in even a vaguely acceptable fashion around the most perfect specimen of human femininity that has ever existed.

“Paul, for the hundredth time, I have a date this evening.

“No, you don’t. You’re just saying that to avoid me. You’re always avoiding me…”

Seriously, can we just have one exchange with a guy who isn’t Christian that doesn’t end with the guy pathetically and creepily hurling himself at Ana’s feet? Just one? Can we? Also, fuck you, Paul, if you think that the only way Ana can weasel herself away from you is by dating someone else. Maybe she has a date because she just, I don’t know, has a date? Not because she’s pulling some elaborate scamola on you? Urgh, this book, I’m telling you. A weight on my soul.

Ana gets ready to meet Christian to negotiate the contract, and thinks to herself ” I don’t wear make-up- it intimidates me. None of my literary heroines had to deal with make-up” and I get annoyed because Ana is about to graduate with a degree in English Literature and she apparently is still stuck in the Jane Austen and Charlotte Bronte phase. When I was studying English at university, the majority of the novels we read were from the past fifty years, so forgive me if I don’t believe that the only women Ana could find to look up to in litreature were from two very easy-to-Sparknotes novels.

Ah, this Kermit gif never fails to fill me with girlish glee.

Ana and Christian meet at the bar of his hotel, and dicuss the contract. Ana briefly grows a backbone as she points out that the contract was legally unenforceable, and asks if he planned to hold it over her head anyway. He doesn’t answer that, and instead insists that relationships with submissives are built on trust and honesty, two things which Christian has earned 100% so far. Oh hang on a second.

Christian discovers that Ana hasn’t eaten (I’m so done with this not eating bullshit; like crap did she forget to eat for a full day and then drink wine on top of that and be a-okay), and decides to take her to his private dining room after Ana suggests that stay on neutral, public ground. Christian asks if she really thinks that would stop him, which begs the questions, stop him from what? Eating? “Oooh yeah, baby, I’m going to eat the shit out of this venison and drink the ever-loving fuck out this wine in front of all these people and there’s NOTHING THEY CAN DO ABOUT IT”.

Whether or not I already had this picture saved to my laptop is neither here nor there.

“If you were my sub, you wouldn’t have to think about this. It would be easy. All those desicions, all the wearying thought processes behind them. The “is it the right thing to do Should this happen here? Can it happen now?””

Notice that none of those questions is “do I want to do this?” and hey, once again, ANA HAS NOT AGREED TO BE HIS SUBMISSIVE. That might be something like what sex would be like if they WERE in a BDSM relationship, but they’re not, and Christian is using that to levy Ana into sex to distract her from her apprehension about the contract. It’s a shame in some ways, because if I see Jamie Dornan in the street, I won’t be responsible for my actions, because he’s the closest thing to a living embodiment of Christian Grey that exists and I so, so want to punch Christian straight in his stupid, pretty, rich face.

Anyone else re-watching Dexter to get them through the long, lonely nights…?

Ana decides that she wants to have some space after the intense conversation they’ve had (yay personal agency!) and she actually gets up and leaves. She worries about their future together, and panics about three months of stuff she’s “not sure” she wants to do. She cries in the car all the way home, which marks us up to the third time she’s left a meeting with Christian in tears. At this stage, if the rest of the book isn’t Ana skipping off to follow a post-college career and forgetting about Christian forever, because they’re so poorly matched. Something tells me, however, that this may not be the case. 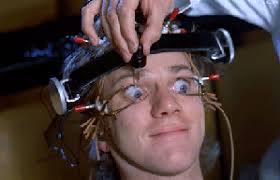 Pictured: Me, reading this book and knowing I have hundreds of pages of abusive bullshittery to get through yet.