Well, another day, another argument about Fifty Shades of Grey on Twitter where I’m accused on exploiting women because I have a pun about boobs in my Twitter bio. I swear I’m just running on fumes, tea, and pure hatred for this book, so hopefully these recaps will become a bit more frequent because there’s some spectaculary awful stuff coming up in the next couple of chapters. We left off with Ana and Christian having the sexiest of sexy times at the end of the last chapter, only for his mother to arrive at his place unannounced.

Christian leaps out of Ana’s vagina, and demands that she get dressed because he wants her to meet his mother-“I expect you in that room in five minutes, otherwise I’ll come in here and drag you out in whatever you’re wearing”- because, and say it with me now, CHRISTIAN GREY DOESN’T UNDERSTAND THAT OTHER PEOPLE HAVE FEELINGS TOO. Ana gets dressed, and spends a paragraph dealing with her “just-fucked pigtails”, which, you know, obviously means this:

After she puts on a pair of his boxers, she wonders if she SHOULD take him up on his offer of clean clothes, while her subconcious calls her a ho. She’s already wearing his clothes, and why the fuck does wearing someone else’s clothes make you a ho? I went to Tescos in my boyfriend’s shirt last week because it’s warm and quick to put on, was everyone eyeing me nervously in the aisles and wondering just how many cock I’d sucked that morning? Well, probably, yes, but that’s more to do with my jolly “Ask Me How Many Penises I’ve Had In My Mouth Today” badge, not because of a comfy shirt.

Jenna Marbles is maybe my biggest internet crush. I’d wife the hell out of her.

After some small talk, Ana gets a phone call, and it’s from Jose, demanding to know why she hasn’t returned his calls after he tried to forcibly kiss her several times the week before. I mean, for fuck’s sake- Jose only had to be less awful than Christian, a job about as difficult as writing a romance more convincing than Twilight. But EL James and Jose missed their mark, and I’ve begun pulling my hair out strand by strand as a comfort.

I mean, I think this is just relevant in any of my articles, or indeed any moment of my life, because this both applies to me and I am at least as hot as Naya Rivera. Shut up, you don’t know me.

Hey, you know what I’ve been doing this week? I’ve been looking at the warning signs for an abusive relationship, ust to familairise myself with them when I’m attempted to pull the organs out of this book. So lets have a look at the next couple of pages with the help of helpguide.org, which provides information to better understand and end domestic abuse. Christian asks Ana if it was “the photographer” who called her.

“Christian glares at me.

“So the photographer called?”

“Just to apologise, you know, for Friday”

Between Mark Ruffalo and Ed Norton, The Hulk has had insanely good luck with casting.

“”I’ll just make a call,” I murmur. I just want to hear Kate’s voice. He frowns.

“The photographer?” His jaw clenches and his eyes burn. I blink at him. “I don’t like to share, Miss Steele. Remember that.” His quiet, chilling tone is a warning and with one, cold look at me, he heads back to the bedroom.

Holy crap. I just wanted to call Kate. I want to call after him, but his sudden aloofness has left me paralyzed. What happened to the generous, relaxed, smiling man who was making love to me not half an hour ago?” 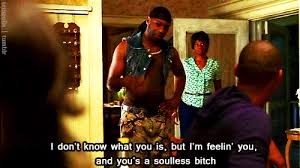 It is always time for Nelsan Ellis as Lafayette Reynolds in True Blood. Tip yo’ waitress.

Now let’s take a look at the list of warning signs for abuse and tick off what applies to this segment.

1. Do you feel afraid of your partner much of the time?

Ana describes his tone as “chilling” and exclaims “crap!” when she realizes Christian is going to ask her about Jose calling, an event which she has no control over. Maybe a bit of a push, but not what you’d look for in a romantic hero.

2. Does your partner have a bad and unpredictable temper?

The last sentence details Ana’s confusion over how quickly he went from making love to her to “warning” her for talking to another man then storming off.

3. Does your partner act excessively jealous and possessiveness?

4. Does your partner keep you from seeing friends or family?
Christian has basically told Ana he doesn’t want her to see Jose, and expressed anger over her imagine desire to talk to him.

5. Does your partner see you as property or a sex object, rather than as a person?

Well, he just told Ana he doesn’t like to share, implying that he doesn’t want Jose dirtying up his precious sex toy. So yeah, I think we can go with posession.

6. Do you feel emotionally numb or helpless?

Ana says she wants to go after him, but is “paralyzed”. So yes, this fits.

That’s SIX REASONS THIS IS AN ABUSIVE RELATIONSHIP IN TWO PAGES. So when those Fifty Shades fans come crawling out of the woodwork and demand proof or a section in the book which promotes abuse and doesn’t question it as a bad thing, here’s one I didn’t even have to look for. Stop saying this book is not about abuse, because you are quantifiably wrong.

Christian and Ana get in the lift so he can drive her home, and Ana bemoans the fact that she can’t talk to Kate about sex, and that Christian is impossible to get help out of because he’s “open one minute and standoffish the next”, because of course this is how healthy BDSM relationships work. Christian grudgingly accepts that Ana can talk to Kate about sex, as long as she doesn’t say anything to Elliot (Christian’s brother, who she’s dating). Ana gets defensive of Kate in her head, even though we all know Kate is a total bitchwhore who enjoys sex and is pretty but isn’t half as amazing as virginal, sweet Ana, and then Ana got the lead in the school musical and kissed the shy basketball player who’d loved her all along. I think.

I was in a high school production of High School Musical. I played no-one of any important, because I sing like a duck swallowing a cricket bat.

Christian drives Ana about a bit in his fancy car while they wear baseball caps and listen to Springsteen (“Gotta love Bruce”, offhands Christian and I crush all my Springsteen CDs to dust). He asks if she’s hungry, (she is hungry…but not for food. No, seriously that’s the line), she says no and he frowns and says he’s taking her out for dinner anyway, at the place of his choice (does your partner control where you are or what you do?).

They arrive at the restaurant, and Christian orders them both wine. When Ana says she wants a coke, he tells her that she’s having the wine anyway (does your partner ignore or put down your opinions?). He tells her his mother liked her (probably because she’s delighted there’s someone about to keep Christian away from the family home long enough for them to change the locks and pretend they’d never met him before). They begin discussing his sexual preferences, because God forbid Ana should talk to Kate about it when they can discuss it loudly in a popular local restaurant. Then this bombshell happens:

HOLD THE FUCK UP. That’s not just young, Ana: that’s statutory fucking rape. That’s against the law as well as being wildly immoral. That person, who “seduced” him? She’s a rapist. A RAPIST. Christian goes on to describe how his  molestor continued a sexual relationship with him as a submissive for six years, and they remain very good friends to this day. I’m going to come back to this later in the recaps, but this is horrible, doubly so because James won’t name it as what it is: rape.

There’s some stupid back and forth over Ana not eating, and Christian explains some more details of the contract and that he’s had fifteen other submissives in the past (all of whom are definitely buried in the garden of the Grey estate). Ana comments for the third time in the chapter that she can’t get a handle on Christian’s ever-changing moods. He takes her back to her place, and Kate immediately starts asking her about what’s been going on in the last few days. Ana rolls her eyes internally, because Kate is a filthy bitch. Kate talks about her first time when it becomes clear that Ana had sex with- and enjoyed having sex with- Christian.

“He was rough. I wasn’t ready. We were both drunk You know-typical teenage post-prom disaster…I was too young. You were right to wait.”

YES BECAUSE EVERYONE WHO HAD SEX BEFORE ANA IS A DIRTY SLUT WHO HAS IRRESPONSIBLE SEX IN HIGH SCHOOL URGH. Outside of some very clear cases, there is no “right” or “wrong” time, there is no “right” or “wrong” person, virginity is a societal construct, and it sucks that Kate had a bad first experience but it doesn’t mean that the author has to shoehorn it in to show that everything Ana does is RIGHT. Oh, and if we’re talking about “rough”? Let’s remember when Grey “ripped through” her “virginity” only a couple of chapters ago (that still makes me clamp my legs together on impulse). Jose calls again, and shouts down the phone about how Ana’s got to forgive him for sexually assaulting her. She does. Look, just slam the fucking phone down, kick Jose and Christian to the curb, and run off to Lesbos with Kate. I would read that story. I will write that story. I will fanfiction this fanfiction.

Ana cooks dinner for them and comments on how nice it is to eat an unhurried, un-pestered meal for once because love is someone hovering over your shoulder and huffing at you till you eat your vegetables, dammit. As Kate goes off to talk to Elliot, Ana braces herself and….looks at the sex contract he’s given her.