The Fifty Shades of Grey film hits cinemas later this week, and I think it’s time we take a bloody good look at why Fifty Shades is a story about an abusive relationship. Hundreds of people are defending EL James’ best-selling novel as a depiction of a love story. but it’s time to add to the maelstrom of people arguing that no, it fucking doesn’t. 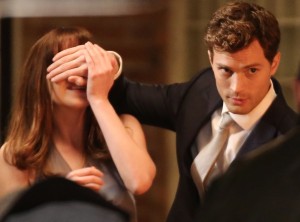 Fifty Shades, as people who’ve been keeping up with my shouty recaps will know, follows the story of Christian Grey, mysterious multi-millionaire wanker and dominant, and his relationship with Ana Steele, mousy, pretentious college student. And, right from the off, their relationship is abusive. Because Christian has an inability to respect boundaries, he travels cross-country to pick a drunk Ana up from a party, takes her home, undresses her, and sleeps next to her, without once asking if it’s okay. Christian gets angry at Ana for being a virgin. He stalks her with tracking devices on her phone. She never signs the infamous sex contract he presents her with in order to establish their boundaries as dominant and submissive, but he uses it against her when he decides that she shouldn’t see her mother. He buys her place of work so he can exert more control over her life. He grabs her and pulls her at several times throughout the novel. Christian occasionally outright threatens Ana with violence for doing things he doesn’t like- describing himself as “palm-twitchingly mad” when she visits a male friend.  He pulls Ana away from her friends and locks her in a room with him until she tells him why she won’t return his calls. He admits to getting her drunk in order to get her to agree to what he wants. At the end of the first book, Ana explains to Christian that she doesn’t like the idea of getting punished- he manipulates her saying that she said she’d never leave in her sleep, and Ana asks just how painful things could get. With no discussion of boundaries, Christian beats Ana with a belt so hard she finds herself unable to speak through the pain and thus unable to use her safeword.  When she does manage to count the blows out loud, her voice is a “strangled sob”, so pretty safe to say that things had gone too far; Christian doesn’t even stop to check she’s okay. Read this breakdown of Fifty Shades with regards to an emotional abuse checklist if you don’t believe me; throughout the first book alone and the whole series by extension, Fifty Shades is peppered with emotional abuse, manipulation and emotional blackmail. That’s a fact. Trust me, I know.

But what does that mean for people who like the book? If you are a fan of Fifty Shades, it doesn’t automatically mean that you support or condone abusive relationships. It means that you’re welcome to enjoy any kind of fantasy you want provided you’re able to draw the line between what you let happen in your head (or on the page) and what you would let happen to yourself or someone else in real life. As long as you’re able to accept the fact that the relationship depicted across the trilogy is a horrendously bad one, feel free to enjoy all the slightly kinky BDSM sex. No, seriously- go ahead and enjoy it. But stop counting yourself amongst fans who defend the book as a love story, or argue that those saying the book is abusive just don’t understand how BDSM works. Fifty Shades is often sold as the love story of a generation, with articles on Match.com and countless other websites giving readers tips on how to find their own Christian Grey. And therein lies the problem with the book- people aren’t satisfied with just the fantasy of a boring, emotionally manipulative manchild- they’re being encouraged to go after it in real life. The problem here arises from a worry that there are probably all too many people willing to become Christian Grey, and all too many people who, thanks to the books, might conflate romance and love with emotional abuse. Because at not one juncture in the book does EL James suggest what Christian is doing is abusive (similarly, the book steers mostly clear of labelling the sexual relationship Christian had as a young teenager with his mother’s manipulative friend as what it is – statutory rape). The reader is supposed to fall in love with him as much as Ana, when we should be encouraged to look out for the often tacit signs of emotional abuse (in our own relationships and in others) that Christian so perfectly epitomizes. Fans who defend this book are basically saying “LOOK! THIS CAMPAIGN OF EMOTIONAL AND BORDERLINE PHYSICAL ABUSE THAT CHRISTIAN CONDUCTS AGAINST ANA IS LOVE!” They are saying that they wouldn’t see a problem with this if it was happening to them or someone they knew. If that doesn’t worry anyone else, you’re probably less invested than me (lucky thing). 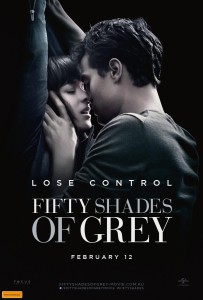 So, with the mighty behemoth that is Fifty Shades rolling into cinemas this week, what can you do to take a stand against the movie (past just not seeing it at all)? Well, I’m donating the cost of my movie ticket to Broken Rainbow, a charity that supports LGBT victims of domestic abuse. Whether you donate or not, keep talking about Fifty Shades- read the books for yourself, and find the countless pieces of evidence that define this as an abusive relationship. You don’t have to shame people for reading it; you have to get people thinking about if this kind of thing is acceptable in real life. I was looking for the right quote to end this piece on, and I found it, courtesy of Gail Dines: “Battered women’s shelters and graveyards are full of women who had the misfortune to meet their Christian Grey.”